Jeff Angus takes a closer look at Dillon's game-winning goal late in the third period against the Vancouver Canucks on Friday night.

It was quite the homecoming for Surrey, Britsh Columbia's Brenden Dillon last Friday night. In front of many family and friends, he had a very good game against the Canucks, the team he grew up cheering for. Dillon saved his best for the end of the game, capping a solid road performance from the Stars with a go-ahead tally in the final few minutes of the third period.

Dillon has looked more and more comfortable with each game, and he and teammate (and current landlord) Stephane Robidas have been a bright spot on an inconsistent defensive group in Dallas. Dillon has started to show more flashes of an offensive game, and he is joining the rush and skating the puck up the ice with more regularity now compared to the first few games of the season

Let’s take a look at how the goal came about.

The goal is near the end of this highlight package: 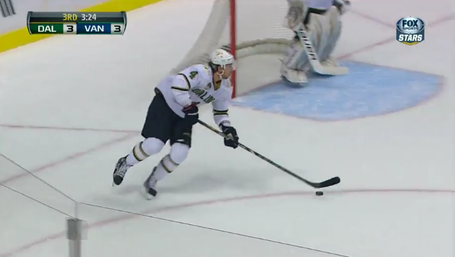 Dillon started the goal off by rushing the puck up the ice. Both teams had recently completed changes, which helps to explain the open ice around him. 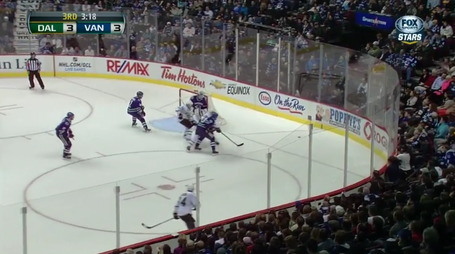 Dillon proceeded to dump the puck in to the Vancouver zone. Brenden Morrow and Jaromir Jagr went after it, hoping to create a mini two-on-one against Vancouver defenseman Alex Edler. Jamie Benn is setting up along the half-wall in case the puck comes to him (spoiler alert – it does). 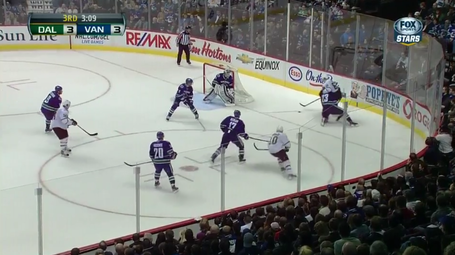 Jagr retrieves the puck, and showing his ridiculous puck strength, takes the 6-3, 220 pound Edler along for a joy ride. Jagr draws a penalty call on Edler here – I’m not sure if "holding on for dear life" is a two minute penalty, but Edler definitely earned this one. Benn has peeled off the half-wall for now. 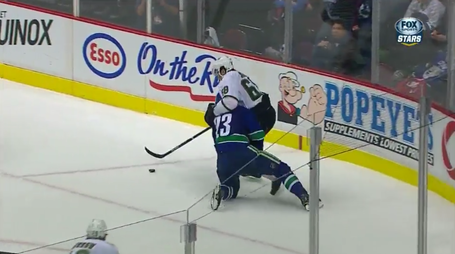 Stickhandling while having someone in a headlock – what else does Jagr have up his sleeve? Jagr doing his best Popeye impression - convenient board advertisement placement, no? 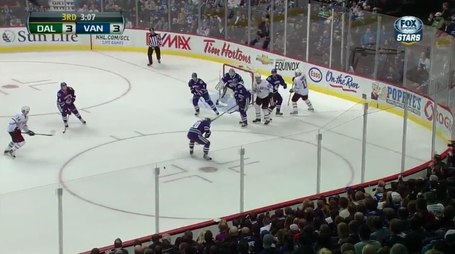 The puck slides through the legs of Chris Higgins. Higgins is generally one of Vancouver’s most dependable forwards, and this is a rare blunder for him in the defensive zone. Still, the Canucks appear to be in pretty good position. For now. 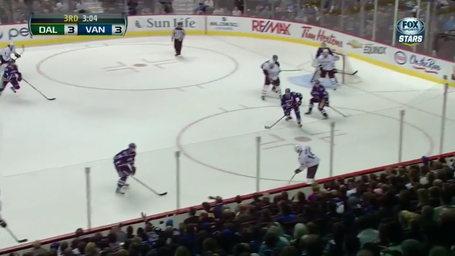 After playing catch with Stephane Robidas, Benn gets the puck back and is looking to make a play. Dillon makes a really smart move by sneaking in behind Zack Kassian, the right winger who is supposed to be keeping tabs on him. It is a play that shows the kind of confidence Dillon is playing with right now – three minutes left against a top team like Vancouver, and it is nice to see the Stars aren’t merely sitting back and hoping for a point.

Vancouver doesn't play this poorly, but they will learn that Benn can do a lot more than just score goals. Higgins needs to stay high on Robidas, but I'd say Benn is a much bigger threat to create something offensively. 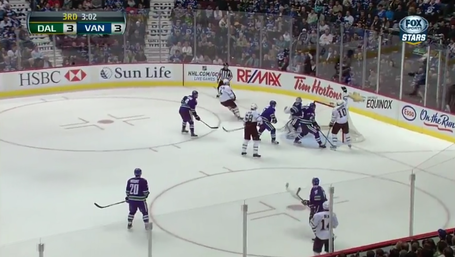 Benn threads a perfect cross-ice pass to Dillon, who roofs the puck over the shoulder of Cory Schneider. Kassian fails to check him – he was probably assuming that Dillon would remain on the point and Benn would have fed the puck back down low or to the front of the net. 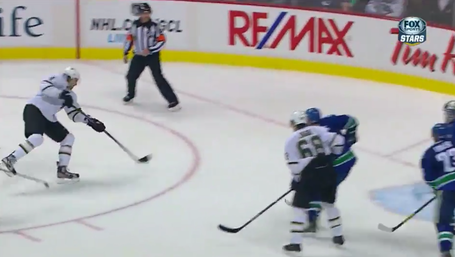 The pass is a great one, and Dillon does a really good job getting the shot off quickly. Receiving a pass across the body and quickly shooting it is not an easy thing to do. 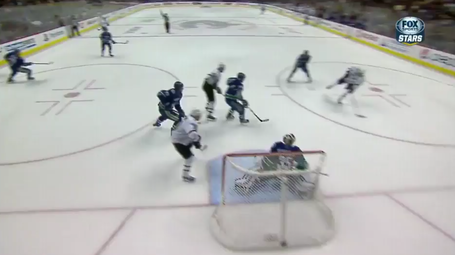 Schneider is in pretty good position – he may be a bit deep in his crease, but he gets across to challenge the shot. Morrow sneaks in behind the defense in case there is a rebound or a deflection opportunity. You can see the referee at center with his hand raised ready to call a penalty on Edler for his ride on the Jagr Express.

And there is Benn lurking in the slot. 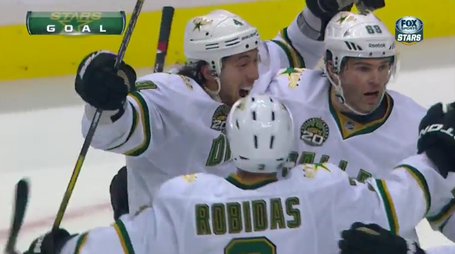 Think he’s happy? In a season already filled with ups and downs, the play of Dillon has been a bright spot for the Stars. It is very rare that a team can find a really good young player outside of the NHL Draft, and full marks have to go to the Stars WHL scouts, Dennis Holland and Shane "Chainsaw" Churla for recommending Dillon to GM Joe Nieuwendyk.

He leads Stars defensemen in goals (three), PIM (20), and is second in plus/minus at plus-4 (only he and Robidas have been plus defensemen in 2013). His 30 shots on goal ranks him second only to Alex Goligoski, and he is seeing only 0:27 of PP time per game (compared to 3:03 for Goligoski). His ability to fill up the stat sheet in a variety of ways has started to give him some value in many fantasy hockey leagues, as well.

Because of his rapid growth spurt late in his junior career, it is tough to find comparables for Dillon. Here are all undrafted NHL defensemen who have played at least five games in 2013 as of Monday morning (my arbitrary cut off for "regular" defensemen):

A few names immediate jump out. Girardi, Giordano, and Garrison. Garrison, in particular, has many similarities to Dillon. Both were passed over at the draft because they were small defensemen (Garrison is now 6-2 and 215 pounds). Both are great skaters, really strong, and have big point shots. Garrison developed into a very solid two-way defenseman in Florida, and he has been good with the Canucks after signing a massive contract last summer (although the offense has not arrived yet).

Girardi was passed over not for lack of size, but many scouts didn’t think he skated well enough to play a regular shift in the NHL. He is now one of the best defensive defensemen in the game. And Giordano has quietly become a very capable two-way defenseman, and he continues to be one of a few bright spots on a perpetually mediocre Calgary club.

Dillon’s underlying numbers are even more impressive. Among Stars defensemen who have played in at least 10 games, he has the lowest offensive zone start percentage at 42.7. He is starting to see more and more of the top opposing scoring units, too. Dillon has a positive Corsi rating, as well (which means that when he is on the ice, the Stars are driving the play, for the most part). Dillon’s PDO is 1025, which means he has been a bit "lucky" (case in point the Edmonton goal), but his consistent play his been a pleasant surprise in 2013.

And if his rapid improvement over the course of the first month is any indication, the best is yet to come.

I have added a few more Stars wallpapers - Jagr, Benn/Morrow, and another Jagr one. Enjoy!

Other Posts from Jeff (@anguscertified):