Brandon and Erin join forces to discuss the highly anticipated debut of defenseman Jamie Oleksiak and what it means for the player and the Dallas Stars moving forward.

Brandon: Jamie Oleksiak will be making his NHL debut tonight at just 20 years of age, a half season after making the jump to the AHL. The Dallas Stars have been searching for a defenseman with his potential for quite some time and while many marvel at his size (6-7, 255) what is perhaps most exciting is the rare blend of skating, puck skill and defensive ability Oleksiak possesses. With the Stars attempting to end a four-game skid and hopefully find an actual identity as a hockey team moving forward, the Stars turn to Oleksiak not just to give the rookie some experience but also to provide some much needed stability on the blue line.

The first question I have to ask here is a two-parter: First, when is the last time the Stars have had such an anticipated rookie debut and is this more about publicity for the team or an actual chance to improve what is happening on the ice? 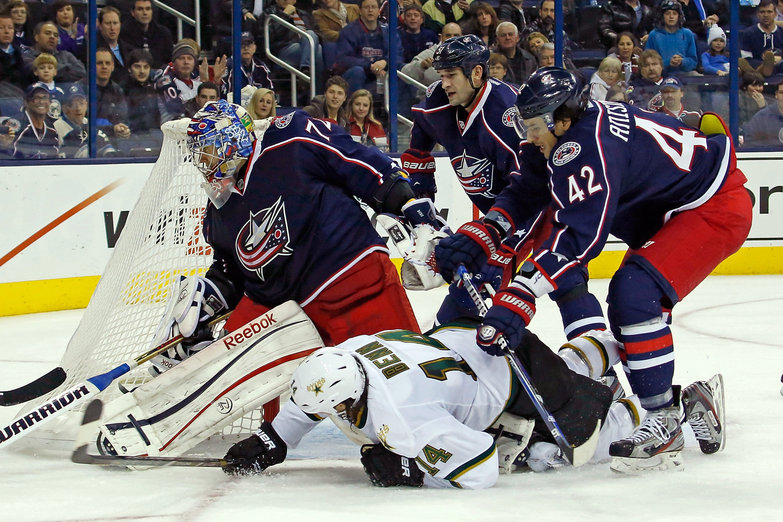 A 2-4-1 start to the season has Dallas Stars fans frustrated, angry and confused. Just what sort of hockey team are the Stars this season, and how long will fans have the patience to wait it out?

Erin: In terms of the most anticipated rookie debut, the most recent example I can think of is Jamie Benn, who gained a ton of hype in the few weeks of his rookie training camp by jumping straight from juniors to the NHL. He's probably the best comparison at least of the recent crop. And I think they brought him up not as a publicity move, though it certainly has excited the fan base, but as an attempt to revive their struggling defense. I don't think any of the six guys who have had regular time back there would be overly happy with his performance so far, and the Stars are trying to do something to shake things up.

While I'm excited to see Oleksiak in the big leagues, I am a little apprehensive about bringing him into a defense that's struggled so much. I guess I've been scarred too much by the struggles of other recent young defensemen who struggled with too much, too soon and never recovered, at least in Dallas. I worry about damaging his confidence or, perhaps more likely, him picking up bad habits that come with losing teams. So I toss back to you, what do you think are the best case and worst case scenarios, and do you think that's worth the risk at this point?

Brandon: When asking that question of you of course it was it with Jamie Benn in my mind. That was a bit of a different situation though, as you mentioned, since it was coming out of training camp and no one really expected him to jump to the NHL right away. Thinking back, it's tough for me to find another mid-season debut that's perhaps as important or as exciting as what will happen tonight against Phoenix.

When Oleksiak was drafted at No. 14 overall in 2011, it was with the thought that this was a defenseman with great measurables with very good potential who would take a few years to really develop. After transferring from Northeastern to the OHL, Oleksiak enjoyed a bit of a slow start with Saginaw before really finding a groove with Niagara after being traded. The Stars decision to promote him to the AHL was a bit surprising at the time because the risk is just the same with making that move too soon; rushing a defenseman at any level can have dire consequences.

For every Matt Niskanen (I know that's who you're thinking of) there is also a Kris Letang. Oleksiak's development has happened faster than we thought it would and he's shown, especially the last two months, he can be a dominant force on the blue line in the AHL. He's been the best defenseman for the best team in the Western Conference and while the Stars are certainly asking him to carry a bit of a load earlier than expected, it's tough not to say he hasn't proven he's earned that jump. I do think the Stars are going to be wary with him; he's going to get three or four games to sort of see how he's adjusting and the team will go from there. Is it worth the risk? Oleksiak is expected to be the cornerstone of this defense for years to come; what better time than now to see what the kid can do?

Erin: Ideally, a better time is when you have a nice, safe spot on the 5/6 paring behind a top four that's playing well, or at least alright. That said, it's not an ideal world and there are always going to be some problems you wish weren't there when young players first come up. I do understand why he's here now with the struggles of the current group, and he has earned it with his performance in Austin.

But I also want to temper expectations of his play a bit. He took a few months to adjust to the AHL level of hockey, and the jump to each new level gets exponentially harder. The players are faster and bigger and stronger, the time you have to make your decisions all but vanishes and every mistake is magnified. As talented as he is, and I agree with you that he has the potential to be one of the Stars best defensemen for years to come, all defensemen have a very steep learning curve that results in some mistakes.

I think the Stars are very aware of this, as well and will probably use him in lower-risk situations with a fair number of offensive and neutral zone starts to begin with. They'll want him to play a smart, simple game and not worry about getting caught up in extracurriculars. Given all that, what do you think reasonable expectations for him are in these first few games?

"We want to get a little heavier in some of these games on the backend, and he's played so well in the American Hockey League... We want to give him a chance to see what he can do." - Glen Gulutzan on Oleskiak

Brandon: I think the best expectations we can have will be to see a young defenseman who can provide some muscle in front of the net, who can get into the corners and quickly move the puck and hopefully start to provide some balance to a defense that has struggled to provide any sort of offense for this team. There's a good reason he's being placed with Alex Goligoski in his first NHL game; both are very good with the puck and Oleksiak's defensive awareness and stability should help take some of the burded off Goligoski that seems to have been weighing him down in the early going this season.

I do think he's going to look better than some expect and I do believe he's going to look better than some of the other defensemen on the Stars through seven games. What stands out the most about Oleksiak is how he's always in control; he uses his superior reach and puck skills to great effect in the defensive zone and he rarely makes bad mistakes with the puck. There is a calmness to his game that I think this team is sorely needing and while this is a big move for Oleksiak himself, I can't help but think it's a good thing for this particular team at this very specific point in the season.

All praise aside, I do think we need to temper expectations perhaps just a bit. While his offense has certainly improved in the past few months (13 points in his last 14 games) he's not going to suddenly be a 40-point defenseman who carries the power play; his certainly going to be a very solid two-way player but most importantly he's going to be that big, physical presence in the defensive zone that has been lacking through seven games. There will be struggles, he'll turn the puck over and he's not going to be perfect in his first NHL game.

That being said, I can't help but feel as if this is a very big moment for the Stars. Oleksiak, more than any other prospect, truly represents what the future of this franchise is all about. I know that you're always wary about such hyperbole, but how do you see what this debut means for the franchise?

Erin: Honestly? It's another step in the process, but it's going to be much bigger in retrospect if he continues along his development path. You look at two recent forward prospects who debuted to much hype and immediate success in Fabian Brunnstrom and Jamie Benn, and I view their first NHL games very, very differently now knowing how their careers have gone. Oleksiak will be the same way, at least for me. I'm excited to see him for sure, for both his hockey skills and because I am easily amused by the visual pictures created by extremely tall defensemen knocking over smaller forwards, but personally, I'm not going to read too much into tonight.

On a more macro scale, though, I think the Stars would argue that this debut, combined with the progression of Brenden Dillon and Jordie Benn and Reilly Smith and others, shows that while the NHL results have yet to come around, the organization is moving in the right direction. For the first time since the three rookie defensemen came up together in 2007-08, the Stars are starting to develop players who have legitimate shots of reaching a high ceiling. Obviously, not all of them will work out in the long run, but the more an organization develops, the better chance it has of finding multiple, long-term NHL guys.

And to me, that, more than Oleksiak's game in particular, is what's exciting about his debut. For the first time in a while, the organization seems to have it's minor-league and drafting house in order, and that can only bode well for the big club in the long run.

Brandon: Erin, I really think you've hit the nail on the head. This debut really isn't about this particular game against Phoenix and there's no final conclusions that should be drawn from his performance. This is about the future of this franchise finally getting exposure to the Dallas Stars fans; we've been talking about these kids for years now and finally we get to see them on the ice at American Airlines Center.

There's no telling exactly what Jamie Oleksiak can become at the NHL level but what he represents is perhaps just as important as the results from tonight's game. There's also the fact that, while Oleskiak's debut is exciting, there are certain more issues facing this team than a rookie defenseman can solve.