The Dallas Stars dominated the New York Rangers for a period, but fell short after the Rangers struck for two goals early in the third.

The Stars probably deserved better than this. They came out of the gate with their hair on fire, but couldn't beat Henrik Lundqvist. Lundqvist stopped 23 shots in the first as the Stars out shot the Rangers 23-6. The Stars needed to net a goal or two in the first to put the Rangers behind the eight ball, but King Henrik wouldn't allow it. I don't usually acknowledge nicknames like "King", but if anyone ever deserves to be called King it's Henrik Lundqvist.

The Stars dominated the opening frame in every aspect except the scoreboard. They out shot the Rangers 23-6, and easily could have put the game away early if not for Lundqvist. Goaltending has a lot of variance among mortal goalies. Henrik is no mortal. He does things goalies aren't supposed to be able to do. He might have won the Hart trophy with that first period alone.

The Rangers only got six shots, but one of them went in. Rick Nash scored on a breakaway after the Stars botched a line change. King Henrik hit Nash at the Stars blue line. After Nash abused Dillon he used his long reach to get around Kari Lehtonen for a tap in. Kari didn't have much of a prayer.

Valeri Nichushkin was stoned late in the period on one of the many scoring plays in which he was involved. He is such a fun player to watch with his blend of size, strength, and puck ability. The Rangers enjoyed watching him at times too.

Jim Nill was the first intermission interview. The interview itself wasn't groundbreaking, but I can't help but note how professional Nill seems at every turn. He carries himself in such a respectful manner, and he seems to hire guys who have those same qualities. It is still such a breath of fresh air to hear him intelligently answer each question thrown his way directly, calmly, and logically. He has a very comforting presence.

In the second period the Rangers decided to play. The period ended 1-1, but this happened. 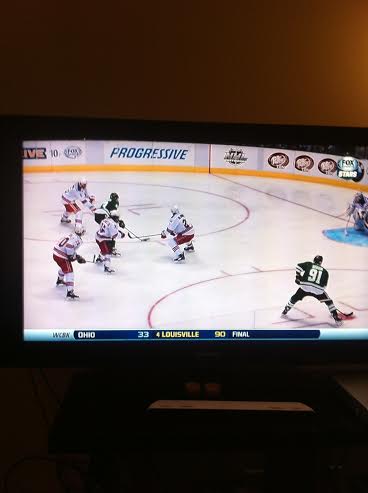 At this point the Nichushkin, Jamie Benn, Tyler Seguin line can pretty much do no wrong. They were dominant tonight. Nichushkin deserves a lot of credit. He was so strong on the puck tonight. The Rangers began to be amazed too. The above image is from right before Seguin was stoned by Lundqvist for one of what seemed like 20 times. Four different Rangers defenders were drawn to defend Nichushkin. He still made a crazy pass to set Seguin up.

11 minutes into the period Stephane Robidas scored a magic puck powerplay goal. It was the Stars first powerplay goal at home this season.

With 6:33 remaining in the period Derick Brassard cheated to put the Rangers ahead temporarily before the god-fearing officials righted the wrong that was Brassard sheepishly punching the puck in the net.

As the period was ending the Rangers almost got back on top as Nash set Brad Richards up in front. Lehtonen said no.

The first two minutes of the third sealed the game. Chris Kreider scored off a Stars neutral zone turnover at the 18:42 mark. The incredibly shaky John Moore scored 40 seconds later. That wasn't exactly how Lindy Ruff drew things up in the intermission I imagine.

Fortunately Alex Chiasson ended his goal drought at the 11:30 mark with a nice shot from the high slot. My unscientific estimate is that it was probably the further from the net he has ever scored. It might seem like hyperbole, but it isn't intended to be. It's definitely one of the two or three furthest.

The Stars immediately tried to give the goal back by allowing the Rangers main offensive threat to get a breakaway and subsequent penalty shot. Nash tried the Peter Forsberg misdirection puck drag move unconvincingly. He barely made Lehtonen flinch.

Benn single-handedly almost tied the game up multiple times with yeoman efforts to generate chances. At the 7:10 mark he bulldozed his way to the front of the net after abusing, I think, Ryan McDonagh to no avail. With 3:00 left Benn undressed most of the Rangers in the lineup, skated around the comfortable-looking Stralman as he slid belly first towards the boards, and fired a shot from close to the slot. Again, King Henrik was unimpressed.

Overall the Stars played well, but the failure to capitalize early in the game when they were absolutely dominant came back to haunt them as the Rangers found their form in the second period. The Stars head back into divisional play Saturday against the Blues. They need more of the first period effort if they want to pull points out of Missouri.