The New York Rangers make their first visit to the AAC since the 2010-2011 season.

The Dallas Stars, winners of six straight away from the American Airlines Center, have things figured out on the road.

At home- Not yet.

The AAC crowd has experienced more losses than wins in the early going (3-2-2) and the power play has yet to connect here in Dallas. A road-heavy stretch of schedule having been weathered, it's time for Lindy Ruff's bunch to carry that momentum into some holiday home cooking if they're to keep pace in a nearly impossible Western Conference race.

The Rangers are coming off a 2-1 home loss to the Boston Bruins and have lost three of four overall. They've failed to score at even strength in three straight games but got forward Rick Nash back in the lineup for the first time since he suffered a concussion against San Jose on October 8th.

From Stars PR: "The Stars return home for their first of two contests scheduled this season against the New York Rangers. Dallas is 4-1-1 in its last six tilts against the Rangers, and hasn't lost at home in regulation to New York since Dec. 14, 2006."

The Mavericks played last night so this one will be shown on Fox Sports Southwest proper just after 7:37pm CST.

Dallas is on a nice run, even without Ray Whitney, but had a wrench thrown into the works Wednesday after losing Alex Chiasson to an apparent facial injury.

"I know he got hit in the face and he's going to be evaluated," Ruff told media afterward. "He hit him pretty hard, so we are concerned there might be some damage."

Whitney himself, though he did practice Wednesday, will be a game-time decision.

"I'd like to see him get a couple more harder practices in," said Ruff of his veteran winger. "Yesterday was probably his first at full tempo, so we'll see where he is."

That makes trying to divine line combinations a mess past the first trio. Peverley practiced there upong Chiasson's exist but that doesn't mean that's the way it will end up. Practice seemed to indicate something like this:

With Lane MacDermid places on waivers yesterday and the status' of Chiasson and Whitney up in the air it seems likely that newly claimed Dustin Jeffrey will make his Stars debut on the fourth line. If neither Whitney or Chiasson can go (and reports adamant that MacDermid would go to the AHL if not claimed) then the Stars would have to recall another forward.

Kari Lehtonen, of course, should be in the Stars net.

New York had a less than ideal start to the season, dropping seven of ten for a 3-7-0 record, but have since made a nice turn-around (7-4-0 run) and now eye finally getting back to .500 tonight with a would-be 11th victory.

No words I could use here describe their start and climb back up the hill better than their Fenwick (shots, goals, missed shots) percentage presented here by ExtraSkater.com... 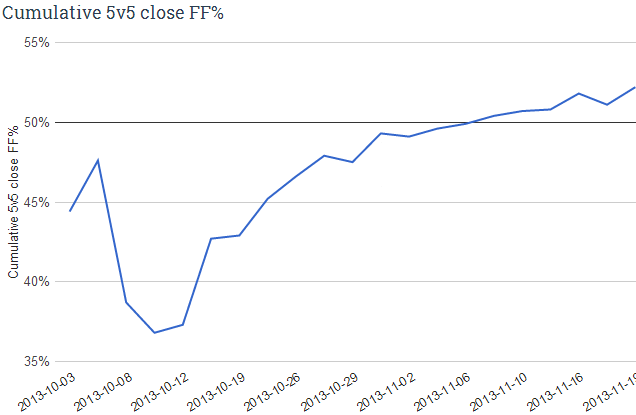 That's steady game-by-game improvement since hitting rock bottom five games in, all against Western Conference teams, oh by the way, and then they feasted on the East for 14 of their next 16. It's still improvement.

They've won four straight on the road and have converted on an impressive 5 of 13 power-play chances in that stretch while Dallas' home power play is the only one in the league that has yet to score, so this one has the potential for another easy story line if those trends continue. Box avoidance is key.

At 2.05 goals per game there are only three teams (all in the East) that score less than the Rangers do, but don't let that fool you. They rank 7th in the league (as of early Wednesday night) with 31.9 shots per game, including 44, 37 and 34 in their last three contests, in which they scored 1, 0 and 1 goals. So they're past due for an outburst.

Michael Del Zotto should be making his return to the Ranger blue-line Thursday night after a stretch of healthy scratches, so make of that what you will.

Between Brad Richards, Derick Brassard, Derek Dorsett and Rick Nash their lineup bears some resemblance to a 2009 Stars/Blue Jackets box score. Tonight is Brad Richards' first game back at the AAC since leaving for free agency in 2011.