Some people are up in arms about the waived-off goal from Sunday's game against the Vancouver Canucks, but the rulebook offers several potential defenses for the call on the ice.

Share All sharing options for: Kari Lehtonen, Daniel Sedin, Crowding the Crease and the Goalie Interference Call From Sunday

Perhaps Daniel Sedin and Kari Lehtonen knew it had been too long since the Dallas Stars faithful had to discuss a controversial goalie interference call because the two combined to give us a doozy of one last night.

Goalie interference, as a non-reviewable, live-speed judgment call, is one of the more inconsistently applied rules in the league. And the rule itself has so many ins and outs that it's sometimes hard to know which of the seven sub-categories of the rule are in play at any moment.

Here's the goal from last night that has everyone up in arms. If you can, focus on the overhead shot from about 40 seconds to 45 seconds in. That's the clearest view of everyone's position and the type of contact involved.

A few quick primers before we delve into the nitty-gritty of the rule and how it applies to this situation. When talking about position in the crease, save a few examples that involve screening the goalie without any contact, the player whose position really matters is the goalie. If a goalie is fully in his crease, it doesn't matter that the forward is on the crease line -- the goalie has complete and total right of way to move up to the edge of his crease without any contact or interference.

Also, since these terms will pop up, screening is the term used in the rulebook to indicate an offensive player who impairs the goalie's view but does not touch him while crowding covers situations where the goalie, while still in his crease, initiates contact with an opposing player.

So let's start with the most applicable part of the rule to last night -- rule 69.3 - Contact inside the Goal Crease.

If an attacking player initiates contact with a goalkeeper, incidental or otherwise, while the goalkeeper is in his goal crease, and a goal is scored, the goal will be disallowed.

If a goalkeeper, in the act of establishing his position within his goal crease, initiates contact with an attacking player who is in the goal crease, and this results in an impairment of the goalkeeper’s ability to defend his goal, and a goal is scored, the goal will be disallowed.

There are two big takeaways from this part of the rule that are important to last night's call.

The first is the reinforcement of the fact that the goaltender's position in the goal crease, not the position of the player he contacts with, is the determining factor. If the goalie is completely within his crease and runs into a player on the edge of it, it's still potentially goalie interference even though the attacking player isn't fully in the crease himself.

The second is that the goalie can initiate the contact with the opposing player, so long as that contact is designed to establish position to defend a shot, and it can still be goalie interference. The attacking player does not have to make first contact for this rule to come into play. Additionally, the contact can be incidental and fit the criteria for non-penalty goalie interference.

So looking at last night's no-goal with this in mind, let's establish the knowns. Daniel Sedin brings himself to the edge of the goal crease while the puck goes out to the point, then to the high slot. Lehtonen, who is fully in his goal crease the whole time, pushes out to try and challenge the angle as the puck goes out.

At this point, Lehtonen's glove comes into contact with Sedin's leg and rear. You can insert your own funny captions if you wish: 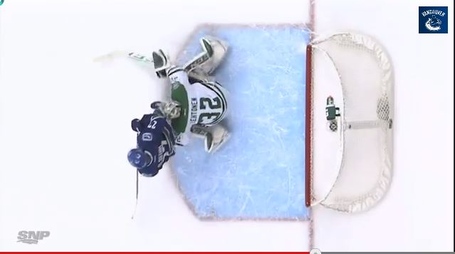 After this first contact, as the puck kicks out to Lehtonen's right, Lehtonen attempts to push that direction. At this point, his stick comes into contact with Sedin's pants. The contact is unmistakable (it's what makes Sedin jump a little bit and eventually roll off to his left) and comes in the immediate lead up to the goal -- you can see Lehtonen's head has turned to the side following the deflection in the screenshot below even as his stick and trailing leg are still in pretty solid contact with Sedin: 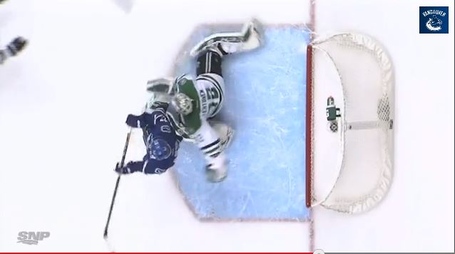 In summary, we have a goalie who is fully in his crease and incidental contact that does affect Lehtonen's ability to use his glove and stick to their full extent. Yes, the puck deflects before it ever gets to Lehtonen off the initial bid, but Lehtonen's ability to react to both the initial shot and deflection is hampered by the contact from Sedin at the top of the crease. Could he have gotten a better push from his trail leg if Sedin hadn't been there? Would the stick have taken a better angle to try and stop Henrik Sedin's shot? I'm not sure, but I'm sure at least one goalie would argue yes.

Here's a few more words from the NHL rulebook that sum up why this is, at least in my judgment, a correct waive off.

Section 1 covers "The goalkeeper is in the goal crease," and example C is as follows:

Section 6 covers "Crowding the goalkeeper," which is more applicable to this play than Section 5 about screening the goalie since there was contact made. Here's example C:

Of all the examples covered by Table 18, this is probably the most applicable one to the play in question.

Lehtonen is in his crease and initiates contact with Sedin to establish position. Sedin vacates basically immediately, but the goal is scored at the same time. The contact arguably impaired Lehtonen's ability to defend his goal, as both his glove and stick were tied up with Sedin for a crucial moment. Therefore, it's non-penalty goalie interference and a waive off is the appropriate call.

The gray area comes in how much did the contact with Sedin hamper Lehtonen's ability to defend his goal, and you're never going to get sets of neutral fans, let alone sets of invested fans, to agree on something like that. It's a very hard call to make real time, and NHL referees are very inconsistent about how they apply it.

Because of this, I understand there being some upset Vancouver Canucks fans after the call. Their argument is likely along the lines that while there was incidental contact between Lehtonen and Sedin, that contact did not hamper Lehtonen's ability to defend his goal, and therefore the goal should have stood.

Only Lehtonen knows for sure how much the contact actually affected him. And in cases like this, where the attacking player brings himself to a spot where the goalie has the right of way, the goalie is almost always given the benefit of the doubt.

The rulebook, in Table 18, example 6B, has a statement that basically reads when an attacking player brings himself to the crease and does not allow the goalie free movement within it, he risks "bad things happening." There's a risk-reward to that type of play, as NHL referees don't always catch subtle contact or crowding situations that could technically be called goalie interference. But Sedin got caught, and based on his positioning, he only has himself to blame on the eventual outcome of this particular play.