It's Not Dallas Stars Hockey Without Ralph Strangis

It's impossible to fathom a Dallas Stars hockey broadcast without the voice of Ralph Strangis calling the game.

Share All sharing options for: It's Not Dallas Stars Hockey Without Ralph Strangis

This is probably one of the more personal articles I've written, which is why I felt it important to step from behind the curtain real quick and share my thoughts on the situation regarding Ralph Strangis and the Dallas Stars.

I was 10 years old when the Stars franchise came to Dallas, and already I was a fan of hockey. The Mighty Ducks, for whatever reason, was easily one of my favorite movies at the time and my brother and I would spend hours playing hockey in our driveway with cheap plastic K-Mart hockey sticks, tennis balls, and baseball equipment used as goalie gear. We pretended to be Charlie Conway in the 100-degree weather, before we'd switch off and pretend to be Emmitt and Aikman going for a Super Bowl. 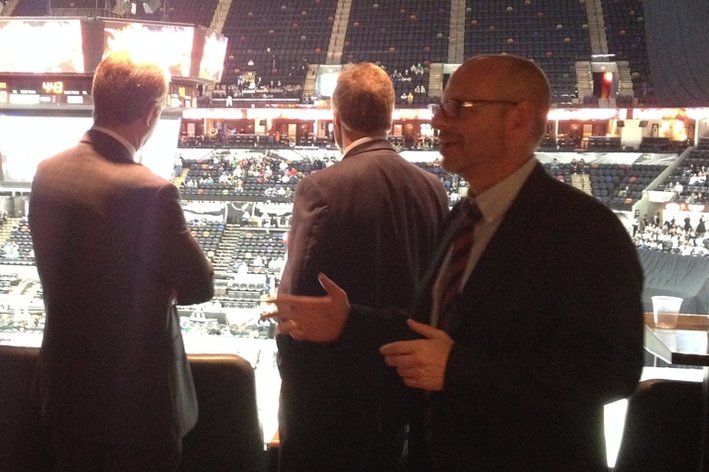 According to Barry Horn from the Dallas Morning News, the Stars and the only play-by-play man they've had since moving to Texas are still at a standstill in contract negotiations.

Sports was a very big part of my life growing up and the Dallas Cowboys and Dallas Stars were at the center of that obsession. We would fight over the sports section every Saturday morning to see who would get to read the articles on the Stars first, memorizing stat lines because of the faded black-and-white box scores usually found on page 7C or so. We would emulate our favorite players through countless hours of hockey games played in the driveway and in the street, and every Stars game was an event I would count down the hours waiting for.

Because of schedules and life circumstance and eventually, work, I wasn't always able to watch the games on television the way I can now. Many games would progress well past when it was time to head to bed, where I would turn to a trusty FM radio and headphones and get lost in the sounds of a Dallas Stars hockey game.

This was during the late 1990's, when each game was part of a building crescendo into what would eventually become a Stanley Cup winning team. Perhaps because I was young and I was so involved in the sport at the time, both as a player and as a fan, but closing my eyes and listening to Ralph and Razor's call of the Stars allowed me to completely immerse myself in the game.

This was before the internet really picked up, before the days when you could see instant highlights on NHL.com or on NHL Network. Many games would pass where all I had to go on was what my imagination showed me based on the descriptions of Ralph and Razor, where their voices became my lone conduit to the team I was so fanatical about.

It's fitting that, as an adult and stationed with the Navy up in Connecticut, that the radio broadcast would once again become so important. I couldn't get NHL Center Ice and for a while certainly couldn't afford it, yet I could get the games on my Sirius radio. Once again, the voices of Ralph Strangis and Daryl Reaugh became my connection to the team, allowing a hardcore fan to follow each game from the other side of the continent.

For me, Ralph Strangis and Daryl Reaugh are part of what defines the Dallas Stars. While players, coaches and management and even as ownership have come and gone in the past two decades, the voices of the Dallas Stars have remained constant. Which is why it is so painful to think of a future where either or both are no longer calling games for this franchise.

Dallas Stars fans are often accused of holding on to the past a bit too tightly, yearning for the glory days of 1999 and 2000 when the franchise was on top of the hockey world. While the Tom Gaglardi era has ushered in drastic change for the franchise and finally boosted the organization into looking forward rather than back, there is still value in remembering where this proud franchise has been.

When we hear Ralph Strangis calling a game, his voice describing an incredible play between Jamie Benn and Tyler Seguin, we also hear his calls of Mike Modano and Brett Hull scoring amazing goal after amazing goal. When we hear Razor describing a mastodonic save by Kari Lehtonen, we're reminded of his incredible descriptions of Eddie Belfour's heroics in net. When we hear their broadcasts of this team now, we're connected to the incredible past that still defines this franchise.

There will come a time when Ralph and Razor do in fact move on, when it's time to hang up the microphones or move on to something bigger, perhaps. Yet it's clear that this is not that time, not now and not with the franchise finally moving forward after four years of remaining stagnant and frustrating.

If and when the Dallas Stars do get back to the postseason and if and when Jamie Benn lifts Lord Stanley's Cup above his head, it's Ralph Strangis' voice I want to hear describing the moment. It's Razor's voice I want to hear breaking down the championship-clinching goal. That's what we deserve and most importantly, it's what they deserve.

I know that there are some, perhaps many, who feel that who is in the broadcast booth calling the games in inconsequential to what is actually happening on the ice. There's certainly logic in that opinion and in most cases I'd agree, yet there are some where the voices and personalities involved are just too ingrained in the fabric of the franchise that taking one away feels like something is missing from the team itself.

I know both Jim Lites and Ralph Strangis and while I don't know exactly what it was that happened that caused this sudden divide between them, I know for a fact Ralph has always intended to end his career with the Stars franchise. I know that Jim will always want what is ultimately better for this franchise and I know that Tom Gaglardi has already proven to be very receptive to the pulse of the Dallas Stars fanbase.

I also know that Lites and Gaglardi certainly wouldn't like to allow the breakup and departure of what many feel is the best broadcasting duo in the NHL.

While there are some fans that likely won't be affected at all by his departure, I know there are many others -- like me -- who would find their enjoyment of the games to certainly take a major turn for the worse. Nearly my entire life has revolved around the Dallas Stars and Ralph Strangis is ingrained in that experience.

Dallas Stars hockey just wouldn't be the same without him.