The Stars try to keep it rolling against the Calgary Flames tonight, but who will start in net on the back-to-back?

It wasn't very pretty in Edmonton last night, but the Dallas Stars pulled out a 3-0 win at Rexall (two empty-netter) and now move to face the Calgary Flames having won four-of-five with points earned in eight of their last ten games.

"The first 20 or 30 minutes were pretty intense, lots of action, but then it died down," Stars goaltender Kari Lehtonen said last night of a penalty filled beginning. "We did a really good job as a team there."

The Flames, meanwhile, will try to bounce back from a poor performance against the Sharks in their last outing. San Jose peppered them with shots and a 2-0 lead but Calgary was able to force overtime, losing in the shootout. Their head coach was not pleased with the point earned.

"If not for [goaltender] Reto Berra, the Sharks can get on the plane after the first period and they'd already have the two points," coach Bob Hartley said.

The big question on back-to-backs for Dallas is who will start in net. With this road trip book-ended with twin three-day breaks the opportunity to get Kari Lehtonen in all three contests would seem to be there, particularly in light of the fact that he could have the day off Friday completely.

Lehtonen faced just seven shots in the game's final 31:23 last night, so he was not overworked (though it was a one-goal game).

A win is a win, so these lines worked- Or did they? The only real goal was generated with a half of a line change complete. Morin and Roussel were on the ice with Peverley over-staying a penalty kill shift to score the game winner.

The Seguin line was the Seguin line, but the Cole-Eakin-Chiasson trio combined for one shot on goal. The contest in Edmonton, special teams-filled as it was, allowed for that to be alright but the Stars will need more. If not in Calgary then definitely in Vancouver.

The special teams play did not allow for an even rolling of the lines. We may get a better look at what this lineup is capable of tonight if they can stay out of the box.

From Stars PR: "Forward ALEX CHIASSON led the Stars with a career high three points (2-1=3) in the first game against the Flames this season on Oct. 24. CHIASSON currently shares fourth among League rookies and ranks third on the Stars with 11 points (5-6=11) this season."

And don't forget everyone's favorite stat, of course, as the Stars are 4-20-2 over the last three seasons on the second night of back-to-back.

The Flames came back from a two-goal deficit to tie the San Jose Sharks Tuesday night en route to a 3-2 overtime loss. That sounds great. Hanging with the Sharks is not easily accomplished, and on the surface that seems impressive.

Until, that is, you consider what actually happened in the game, which modern technology allows. Here's the shots attempted from Extraskater.com... 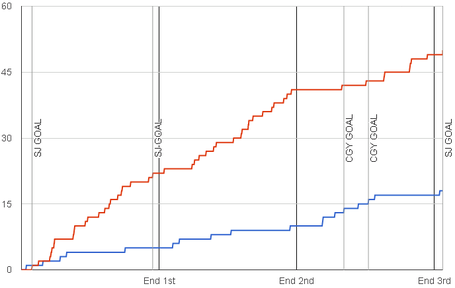 They didn't hang with them at all. Final shot attempts (Fenwick) in the game ended 50-18 in favor of San Jose.

"That was the biggest spanking that we've taken in the first period," Flames coach Bob Hartley said. "We didn't touch the puck. The only way that we could have touched the puck is if we would have had two pucks out there."

They've lost four in a row and six of seven overall. They've allowed power play goals in five straight games and broke an 0-for-30 drought on the job against San Jose after a questionable (according to the Sharks) interference call, so there's some opportunity to win the special teams battle here tonight.

Calgary has lifted 9 of its 15 points off of hapless Eastern Conference opposition, but has also beaten the Kings, the Blackhawks IN Chicago, and of course took San Jose beyond 60 minutes.