We break down the Dallas Stars first goal against of the season to examine some of the early season headaches inherent with new players and new systems.

Share All sharing options for: Video Replay Booth: Breaking Down the Dallas Stars First Goal Against the Florida Panthers

With every new Dallas Stars season comes the opportunity to break down the good, the bad, and the ugly.

Soon enough, we'll have enough glorious Alex Chiasson goals to fill an entire encyclopedia of how to drive to the net and pick up great passes and rebounds, and I'm sure there will be ugly hits both committed by and committed against Stars players soon enough.

But we're going to start our occasional breakdowns of key Stars plays with a combination of bad and ugly today by examining the first goal against of the season, the Scott Gomez tally late in the first period of the Florida Panthers 4-2 win on opening night.

Watch it in all it's ugly glory here.

To start with, I'd like to apologize for the quality of the video captures - the new NHL video player has the superimposed play button any time the video is paused, and it also has various buttons floating on the top fifth of the image. I tried to work around that where possible, but sometimes I found it necessary to leave it in. I hope once I get my GameCenter Live account up and running again, this will be less of an issue.

But for now, Ray Whitney will sometimes have a play button superimposed over him. I'm sure he won't mind.

Let's start the play with the first real "loss" for the Stars. Brian Campbell has dumped the puck into the corner, and Drew Shore has jumped toward it, challenging Alex Goligoski. Goligoski denies him the inside lane - and indeed, he denies him the outside lane and the puck as well by pinning him to the boards - but he does not contain the puck itself, which allows the Panthers to pick it up.

As you can see below, the Panthers are starting to establish a cycle, and Scottie Upshall rotates into the lane Shore had been attempting to take, picking up the loose puck he goes. Cody Eakin recognizes this, and recognizes a defenseman has been taken to the boards, so he steps down low to pick up Upshall. Whitney also sinks low by the faceoff dot to provide support should the puck come out toward the middle of the zone. 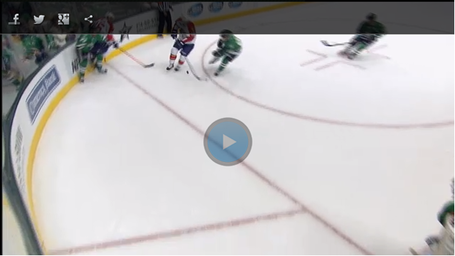 Here we reach our first real snafu: Eakin gets beat pretty easily by Upshall. While Eakin still has stick coverage on the Panthers forward at this point, he has lost both body position and puck containment. The most likely route for Upshall is behind the net, and it's a very dangerous place to lose a guy (and as we will see, it causes a bit of a chain reaction). Note that Goligoski is still keeping Shore outside and Whitney is guarding the lane back out to the point but ignoring the Panther just to his inside. 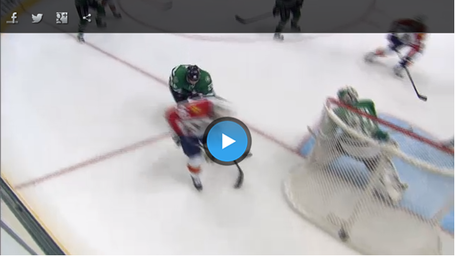 Switching to the back angle just moments before, you can see all five Stars are below the faceoff dots and "covering" three Panthers, save for the fact that one of the Panthers is completely unmarked. Individually, each of them is thinking the right thing for a certain scenario - Sergei Gonchar is holding the back post and watching for the player who would be coming behind the net ahead of the beaten Eakin, Whitney and Alex Chiasson are guarding the lanes out to the point, Eakin is chasing Upshall and Goligoski is on Shore in case the puck comes back up the boards.

In the video, you can see that Chiasson essentially carries Scott Gomez down to the mid slot before letting him go and cutting back up. It's not close enough to really be coverage, but they are moving in tandem for a bit. However, he doesn't seem to let anyone know (or no one reacts to his warning) that Gomez is headed to an unmarked, extremely dangerous area of the ice.

As the screenshot below shows, Eakin does a decent job of forcing Upshall behind the net (though he notably is losing body contact and has no angle to get at the puck), and Gonchar almost certainly reads this a play where he will need to step up and contain Upshall as he comes around. His eyes are locked on Upshall, and no one has alerted him to (or he hasn't heard or noticed, or both) a man going to the front of the net. I would bet Gonchar is thinking this is a zone coverage type play and that the puck carrier is about to enter his zone having beaten the center. In that system, the puck carrier would be his responsibility. But if this is a true man coverage system, the way Eakin and Goligoski seem to be playing it, then Gonchar has to either trust Eakin to recover and look for the nearest unmarked man or he has to communicate to another teammate that he's leaving a man that needs to be picked up as he shifts to Upshall.

All that is contingent upon the fact that Gonchar knows Gomez is there - I'm not sure he really does, honestly. Again, there is a definite failure to communicate somewhere in this chain.

Whitney and Chiasson are other contenders to pick up Gomez. Whitney is closer by the time the play ends, but Chiasson has the least dangerous guy on the ice - the far point man (Campbell) who would have to receive the pass at one heck of an angle. Additionally, Chiasson carried Gomez for a brief moment before cycling toward the outside. Given the path Chiasson is taking, my suspicion is he also thinks the puck is going around, and he's trying to anticipate a pass up the boards.

In this screenshot, the Stars are in real trouble. They're all puck staring rather than recognizing what's going on around them. You can really see that Gonchar is starting to step up on the far post, anticipating the play is coming around to the far side.

At this point, you'd really hope Whitney or Chiasson would recognize the most dangerous guy on the ice is right between them with no coverage. Yes, they are responsible for the point men and those upper zones, but given Upshall's position on the ice, getting a direct pass back to either point would be very difficult. Even if the wingers feel like they can't leave their coverage, they must communicate when they see Gomez driving to the slot so that Gonchar, whose back is turned to that area most of the play, is aware of it.

Finally, this is the point that the puck starts working its way out from Upshall and back in front of the net. Upshall gets the puck in his skates and then appears to kick it to his stick and tip it in front. Is that entirely intentional? There's no way to tell, but it certainly worked out for him.

In the screenshot above, you can start to see the profanities go off in Whitney's head. He finally spots both Gomez and the puck coming out but is still about a half-body length away from him. Gonchar has completed his move to behind the net, Upshall is pulling up as he's given up the puck, and Kari Lehtonen has dropped into his butterfly but too late because...

... it's behind him. Here you can really see what Gonchar was thinking on the play - he's stepped up on Upshall completely. Whitney's last-second dive had no effect on Gomez, Eakin is still cutting around the net, Goligoski has a piece of Shore and damn well isn't going to let go of it, and Chiasson is covering space.

So what are the lessons to be taken from this mess of a goal?

There are the usual obvious ones - that one guy getting beat in a dangerous area can cause a cascade of problems, that players in the defensive zone need to keep their heads on a swivel and not get locked on the puck, that assuming where a play is going to go makes a you know what out of every one.

The one I take from it, though, is the Stars struggled mightily with defensive zone communication in the season opener. None of the players communicated who was going to cover net front - even if somehow no one noticed Gomez sneaking down (and they should have, but that's puck staring for you), there needed to be talk when Eakin and especially Gonchar start rotating deep behind the net.

Finally, I think some of this is a bit of a learning curve with Lindy Ruff's defensive system. He has mentioned a few times in that he's installing more zone defense looks for the team rather than strict man-to-man coverage, and this play reads to me like a few guys (Gonchar, Whitney, probably Chiasson) are playing zone defense in their own heads and a couple others (Goligoski, Eakin) are playing man.

Gomez finds a soft spot in zone coverage that is exacerbated by the fact two players are sticking with their men outside of their zones. With Goligoski and especially Eakin getting drawn out and low, and the two wingers committing hard to covering the lanes to the point, that leaves Gonchar with a no-win decision. Even if he notices the guy in front, he has to decide if he's going to take him and give up an unmolested wrap/centering attempt or if he's going to try and cut off the puck carrier and leave a potentially dangerous shooter all alone.

The Stars were markedly better at this type of situation against the Washington Capitals. The players supported teammates in puck battles by identifying less-dangerous areas of the defensive zone that could be left uncovered (on this particular play, it's arguably the far point) and shifting their coverage to close lanes. They moved much more as a unit into and out of man and zone coverages.

But this first goal stands as an example of something I think we'll see several more times as the players get used to each other and Ruff's system - a small breakdown and players being on different mental pages causing gaffes where you're left wondering "How in the world did they not notice that guy?"