Stars Showcase Good and the Bad in Win Over Buffalo Sabres

The Stars have collected five of the last six points available to them while making plenty of errors along the way.

Share All sharing options for: Stars Showcase Good and the Bad in Win Over Buffalo Sabres

Monday night in Buffalo was a bear trap, and the Stars just barely got their toes out of that thing before heading to Montreal.

The emotional return of Lindy Ruff to his home of so many years, the re-acquaintance of one Mr. Steve Ott, the Matt Moulson arrival - All were talked about heading in, all had the potential to produce uneven emotions and circumstances, and all were served on the ice after the puck was dropped in large fashion, but it was Ruff who got the most satisfaction leaving with the W.

"Everyone in here, even though we weren't talking about it too much, we all knew what tonight meant to our coach," Tyler Seguin told the DMN last night. "He's always there for us, trying to make us better players and a better team, so we definitely wanted to pull a win out for him tonight."

For 30 minutes they looked like a much better team that they have.

So there's a lot of good there. The highly discussed topics are seeing improvement.

And then there are the very specific and easily identifiable, glaring mistakes that threatened to take it all back. The turnovers and the blown coverages and the penalties.

After the game Brent Severyn expressed his dismay at the way the Stars handled the puck before praising them for the victory. "Curious puck play, bad turnovers and not doing the simple things," was what Ralph Strangis opined on the post-game show. It's not just the fans that get irked. There's a frustration there even in victory.

(And Razor's facial expression at "curious puck play" was just classic. I should have taken a video...)

So they keep working to get better. This was no Picasso, nor was the game against Winnipeg, nor the first half of the Calgary game in Dallas. There are so many "coach-able" moments there, but they did collect five of six points from below average competition. So where there's frustration there's also hope. 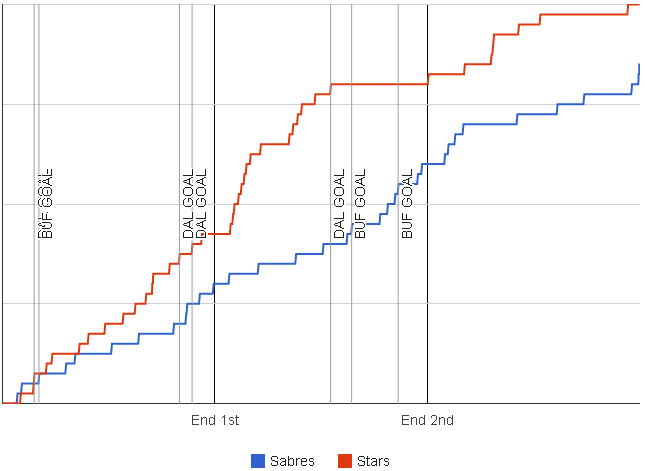 Many nights the script is: Let Kari keep them in the game for a while, then start to push back (like against Calgary). Last night it was to do the pushing first, then let Kari do the lifting on the back half. Either way, if Dan Ellis plays tonight those aren't viable game plans.

"These are big games and it's nice to get back to .500, but we need to find some consistency in this locker room," said Tyler Seguin after the game. "Letting them get those two goals and coming back is not good enough. One of those was my fault, so it's all about getting better."

Six of their next eight come on the road, and the competition level gets pretty stiff starting tonight against the 7-5-0 Montreal Canadiens in one of the best home-building advantages in all of sports. Then the Bruins, Avalanche, Canucks, Red Wings and two meetings with the Blackhawks await in another road heavy month of November.

So succeeding in an "easier" stretch was very well. It only gets harder from here on out. They must come together on the road the way they came together for their coach last night.