Lindy Ruff's return to Buffalo, how the Sabres made news on Sunday with a big trade, Bobby Orr and more in today's links.

Before the Buffalo Sabres decided to make tonight's game against the Dallas Stars even more interesting, there were a few big story lines for the matchup.

Steve Ott faceing off against his former team for the first time since the trade that saw him go to Buffalo. Then there's the whole "Sabres fans feel like the Stars cheated their Cup away from them" angle. (Yes, this is still a thing.) Brett Hull has the best response to that, better than I could ever offer up: 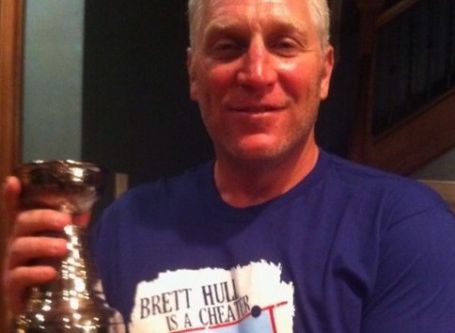 But the biggest story is the return of longtime coach Lindy Ruff to the place he spent 16 seasons. The fans and media may be thinking more about his return than the man himself is, however. According to the Globe and Mail:

"The No. 1 thing on my mind is our (1-4) road record," Ruff said. "Really focusing in on that on this road trip. It's not like I've been gone a long time, so it's not like I'm walking up and I've been missing for two or three years."

I, for one, am glad he's focusing on the fact that his current team has road woes. Keeping focused on that should help the Stars remain intent on the task at hand -- taking advantage of a struggling Sabres squad that just traded away sometimes captain Thomas Vanek, their points and goals leader in this young season. So just what did Buffalo get in return for trading away soon-to-be unrestricted free agent Vanek?