Alex Goligoski and Sergei Gonchar were separated five minutes into the game last night - Who came out on top in the numbers?

Dallas Stars head coach Lindy Ruff has not shied away from speaking the problems his defense has had in their own zone, and he's been hinting for several games that changes are coming.

"We know what we have," Ruff told the Morning News yesteday in Anaheim when asked specifically about the struggles of his two highest-paid defensemen in Alex Goligoski and Sergei Gonchar, "and they have to play to their capabilities. If they're not playing to those capabilities, that's when you run into trouble."

He said he'd skate seven defensemen in warmups. He said he'd make a decision at game time. Then he sent out, in order, Robidas and Dillon, then Daley and Jordie Benn, then Goligoski and Gonchar. Same as it ever was.

If you were to callously seek to solve a problem by eliminating possible causes, as one might debug a computer program, for instance, you might then glance at the Fenwick numbers (shot attempt differentials) and see what changed after the switch.

Those new pairings did last for the duration last night. Taking 5-on-5 play only and looking here at Extra Skater.com's player stats you'll see two defensemen were below 50% in Fenwick percentage and significantly worse than the other pairings: Trevor Daley and Alex Goligoski. Gonchar, at least by the numbers, had a better game, though he was -1.

So there's a conclusion that can be drawn there, if you like, but while the "small sample size" argument on the Stars' overall play has now expired, it's still valid in this analysis. It's 55 minutes against a good team.

Ruff's own analysis could lead to a desire to let these pairings play out in a game that does not feature three special teams goals against and see what happens. Aaron Rome is coming back. Kevin Connauton could get a look.

There are options. We'll just have to wait and see. Alex Goligoski was scratched by Glen Gulutzan last season on February 6th and responded by scoring 24 points in the remaining 37 games.

And now, to pick at the scab, last night's shot attempt differential as it progressed, fromExtraskater.com... 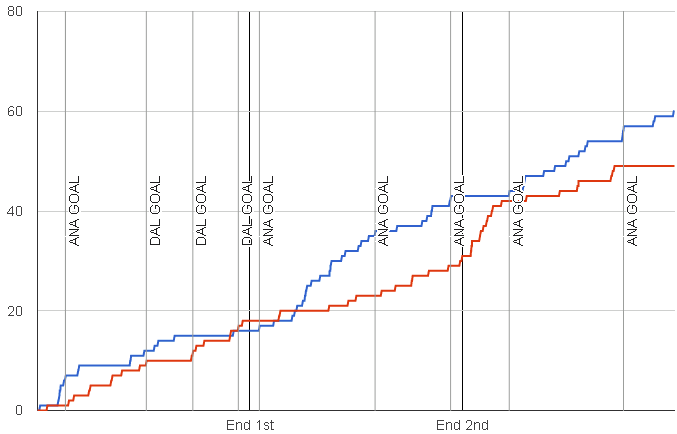 If you're the sort of person that likes to look on the bright side, consider the following: At 4:23 of the third period the Stars were down by a single goal and had attempted (fenwick) 42 shots to Anaheim's 43. That's how close it was. A single goal differential, a single shot differential. The Stars had kept up with them to that point and had a chance in spite of all the bad they had done and 15 power play shots surrendered.

Here's the bad news: They attempted just seven more shots in the game's final 15:37. Seven. Attempts. Only four of them actually got on net, one of which was recorded as "71 ft wrister." So perhaps just as disturbing as falling behind after taking a 3-1 lead was their inability to generate anything close to offense when they absolutely had to have it.

Anaheim didn't sit on their lead, so give them some credit. They didn't let "score effects" skew shot totals. They continued to take it the Stars until the final horn. There's a lesson in there, but you need a third period lead to apply it.

The Stars are off today, so there will be no news of possible shuffling until tomorrow.