Statistical Resources For The 2014 NHL Season

Ever wanted a succinct compilation of useful links to enhance your hockey viewing through the lens of statistical analysis? Today is your lucky day.

Share All sharing options for: Statistical Resources For The 2014 NHL Season

As #fancystats have grown in popularity numerous resources have popped up that give people easy access to almost anything they want to know. With the season in it's infancy now is as good of a time as any to pull out the Rolodex of resources and share them.

We'll start with the standards before we move into the newer additions to the world of hockey stats.

The two main standards have been timeonice.com and behindthenet.ca. Neither site has been updated for the 2014 season as of yet. Timeonice, among many other things, provides Corsi and Fenwick charts on a game by game basis. It allows you to look at cumulative stats over specified games which allows an extra level of analysis. Timeonice also provides shift charts that show the shift lengths and matchups from each game.

Last year nicetimeonice.com came into existence. It mirrored links from timeonice to help people get easier access to the data stored within Timeonice. It was a great help last year, but unfortunately has little use without Timeonice up and running.

This season Extraskater.com was launched in it's Beta form. Some of the kinks are still being worked out, but it does or will do everything that Behindthenet and Timeonice did. The detail available for each game is incredible. A few screen shots from the Stars' last game illustrate the point.

Screen one is the team Corsi report: 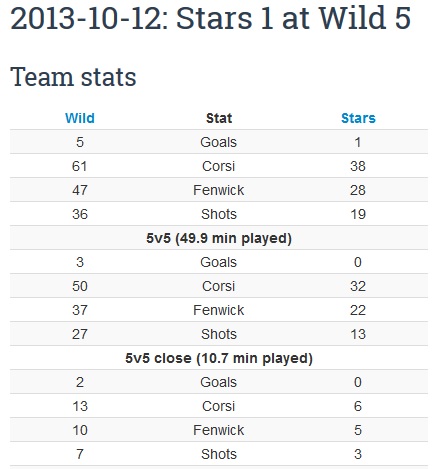 Screen number two is the Fenwick chart from the game which shows cumulative events and how they relate to goal scoring plays from the game. 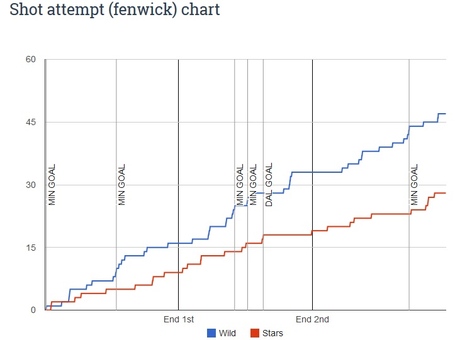 These two pieces of info being in one place makes life a lot easier for those of us wanting this information to be available quickly.

The other neat feature of Extraskater is that they are keeping track of cumulative stats like Behindthenet did also. The site offers increased functionality that allows you to sort the info on the site without involving Excel repeatedly.

The Timeonice shift charts have been recreated and injected with steroids as well. Shiftchart.com allows you to do a bunch of things I still haven't fully had time to look through, but it at the very least recreates the shift charts Timeonice had.

Stats.hockeyanalysis.com is a resource that gives you an overview of the season like aspects of Extraskater. Where it goes further is WOWY functionality. WOWY is without/with you analysis. It shows what two players did together and what each player did on their own. It shows time spent together, time spent apart, and what they produced in those situations.

Two final analytical resources you should know are Somekindofninja.com and Hockey Abstract's Player Usage Charts. Somekindofninja houses shot location charts that can be sorted in various ways to show you from where players are taking their shots. The Hockey Abstract link is the location of the Player Usage Charts we have all come to know and love.

That more of less covers the available tools. I considered going into people you could read if you're wanting more analysis, but that would take up a large amount of space. If you're interested let me know and I'll happily provide a list of resources.

As you can see, there is a wealth of information available. Efforts have been taken to make it more accessible in recent years, but it can still be overwhelming. There are undoubtedly more resources out there, but these should give you a great start if you want to start digging around more on your own.