Can the Dallas Stars Get More From Kari Lehtonen This Year?

Two days before the season starts we enter the final three of our Impact Player series countdown with a discussion of Kari Lehtonen...

Share All sharing options for: Can the Dallas Stars Get More From Kari Lehtonen This Year?

Number three on our Dallas Stars Impact Player countdown, as voted on by our lengthy list of Defending Big D contributors, is the team's highest paid player Kari Lehtonen.

You know who we'll talk about in the number one and two spots tomorrow, but isn't a team's goaltender always the one with the ability to make the biggest (positive or negative) impact on a franchise's season?

One could make the case that in each of Glen Gulutzan's two seasons seasons here the team stumbled out of the gate from a defensive standpoint (see giving up 40 or more shots in their first three games last season...) and that Kari Lehtonen was the only thing keeping the ship pointed in even remotely the right direction, giving the team their chances to compete for playoff positioning later in the year.

As time goes on, however, it's the perceived end-of-the-year decline that people are mentioning more and more.

He starts the first of a five-year extension signed just hours before the lockout started 13 months ago, and with the $6.25 million ($5.9 million cap hit) he makes this year comes increased pressure to carry the team in March and April when they need him the most.

Did he fade down the stretch last season? Can we even measure that? Here's a look at his cumulative save percentage as each of his 36 appearances unfolded last season... 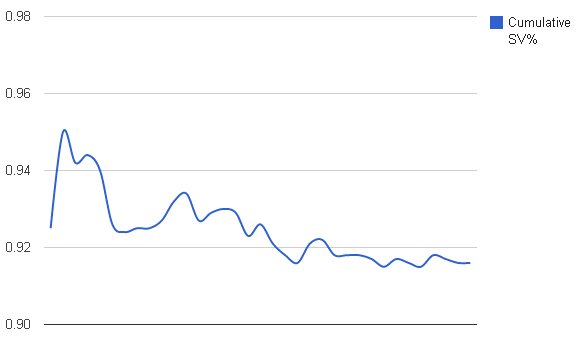 So there's a definite downward trend there, but could the same not be said for the rest of the team? Couldn't the same be said and shown for the two seasons before that one?

There was no nagging injury (presumably) to drag his performance down, nor should there have been any fatigue in a Bettman-shortened season. The team allowed 31.0 shots per game in front of him, which was one the league's poorer marks, but that's not necessarily prohibitive for Kari, who won three different games when facing over 40 shots last year and another with 38 SA.

Judging a goaltender alone is mostly folly. So much of what happens in front of him dictates the outcome when the puck gets to the goal line.

His .916 save percentage was OK. It was 19th in the league among goaltenders who played enough games to qualify for the NHL's save percentage "leaders" category, however many that is. Is it good enough, though? Do they need more?

Aren't players at 29 years of age, nearly 30, what they're going to be? Is there time for significant improvement?

It is the team in front of him that must improve.

With ESPN calling him the 20th best goaltender in the league, his health still the butt of national hockey media jokes, and no playoff appearances in Dallas motivation should be in abundant supply.

Fans hope a new coaching staff means less work for Kari, but until that plays out it appears as though it still could be all on his shoulders. If you're the beleaguered Lehtonen, however, it might be nice if your teammates carried you this time.