If this is a preview of playfulness to come from Dallas Stars PR, it's going to be a fun season.

The NHL is returning after 113 days of lockout hell, and the competitive spirit, it seems is already ramped up to playoff like form in the Dallas Stars PR department.

#dreger face was fun, and the NHL Podium will live in infamy, but in-season Twitter-Tomfoolery is the kind we like best. The Dallas Cowboys organ-eye-zation decided to send a little barb the Dallas Stars' way in a reply to someone looking forward to the start of baseball season, presumably in light of the Cowboys'...ahem...struggles... 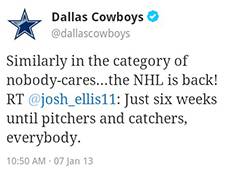 That tweet, as they so often are, has since been deleted.

No matter, as the screen shot exists. The boys in Frisco decided to reply in kind, a la LA Kings style... 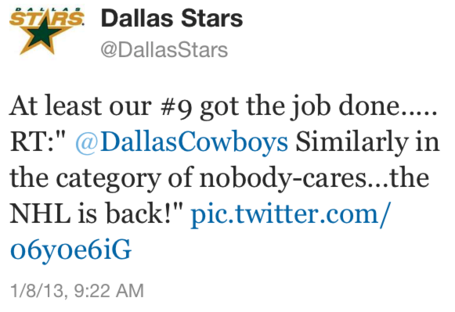 The link is to a particularly iconic photo of Mike Modano lifting the Stanley Cup.

It's all in good fun, of course. The Metroplex is a Cowboys town, no doubt. They've won more championships (those are cute little trophies) than the Stars and there's a reason why Sunday afternoon games don't start in hockey season until mid-February.

The Cowboys have since apologized...

@dallasstars our sincere apologies for the inappropriate tweet posted accidentally to our account. Good luck this season.

Call it the danger of having more than one Twitter account linked to your device, most likely.

George Riba at WFAA offers his own barb.

We're having fun here, no?