Dallas Stars 2013 Season: Do The Stars Need An Enforcer?

The Dallas Stars don't have an enforcer. Are Loui Eriksson, Jamie Benn, and Derek Roy doomed?

Share All sharing options for: Dallas Stars 2013 Season: Do The Stars Need An Enforcer?

No. They aren't. The enforcer, in the modern NHL, is a creature quickly heading towards extinction. They're an unnecessary component of a team now. As Brandon discussed, team toughness is important. The presence of an enforcer doesn't imply toughness though.

The role of the enforcer comes to us from what is, at this point, the ancient history of the NHL. I'll let Doug Robertson of puckpodcast.com explain the problem:

When people talk about enforcers, they tend to think of them in the model they grew up with in the 70s and 80s: a muscleman riding shotgun with a superstar, ready to pound on anyone who looks at him funny, or barring that, waiting to leap off the bench at the first sign of trouble...This concept, however, is clearly obsolete today....In today's NHL, top lines don't tend to play against checking lines in the traditional matchup game: instead, they often play matched up against other teams' top lines, with the idea being that the best defence is a good offence.

The idea of an NHL team giving a player substantial ice time to only be a goon then makes little sense thanks to their skill set. That skill set, as we're all aware, is pretty barren. The lack of useful NHL skills leads to predictable problems when they're given expanded roles:

Your stereotypical goon isn't very fleet of foot...Your stereotypical goon also tends to have hands of cement, and probably isn't able to finish off as many of the sweet passing plays and open chances that are provided by his more talented linemates. More plays will die with or because of him, meaning more time in the defensive zone, fewer goals for, and more goals against. Whatever minor benefits he might provide as a large body in front of the net or as a crasher in the corners is negated by the fact that he can't take advantage of his situation well enough to justify his presence.

The enforcer we generally come across today is a fourth liner who plays less than ten minutes a night. Cam Charron broke down the profile of a modern goon at the Backhand Shelf Blog at The Score.com:

Your average player with 10+ fights played just over 9 minutes a game, was -6.27 Corsi with a 46.7% offensive zone start rate against pretty soft competition. Since they played enough games (Janssen didn’t) to qualify for this list, they’re all pretty much regular players, so most found some sort of usage role in the lineup.

It wasn’t particularly the toughest job. Few were counted on to score. On average, the "goons" had the regular season scoring ability of Dale Weise or Dustin Penner. Possession-wise, they had the abilities of Eric Nystrom.

Basically, goons play easy minutes against lesser competition and still struggle. They aren't desirable roster options because they aren't good hockey players for the most part. The justification for keeping them on a roster is that they provide enough value through protection to make up for their lack of skills.

These players end up on a roster for the same purpose as the traditional goon, but they aren't placed directly with the star(s) they are hired to protect. Instead, as Cam showed, they play easy minutes where their impact on the actual game can be minimized. Unfortunately, even in limited minutes, an enforcer can cause a boatload of unnecessary problems.

The average goon, in limited ice time, costs an NHL team about one win per year according to Derek Zona of The Copper and Blue. By his calculation the average goal differential of an NHL goon over the course of a season is -5.55. They're on the ice for almost six more goals than they generate despite the small ice time.

The penalty differential (penalties drawn minus penalties taken) of enforcers digs their hole even deeper:

The final conclusion Derek came to was this:

As Tyler at MC79hockey has shown, a differential of just shy of six goals is approximately one win or loss per year, so Ivanans has cost the Kings five wins in the last three years. Tim Jackman has been on the wrong end of 25 goals over that same time period, and cost the Islanders four wins.

Using these numbers, the average NHL goon is responsible for -6.83 goals per season, or one loss per year

The skill set of a goon doesn't help a team on the score sheet. The only possible benefit is a quasi-intangible ability to prevent man-games lost to injury and, thus, help their team win more games with the team's star players protected. This is an effect we should pretty easily be able to see.

The '67 Sound at The Leafs Nation tackled this problem for us too. For the 2010-11 season they compared both man-games lost to injury and total points to fighting majors per team. The results are predictably hilarious. First, how fighting majors relate to total points: 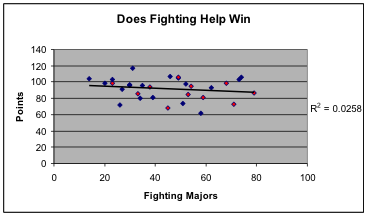 The trend is fairly weak which suggests no relationship. If there is any relationship, it's that the more fighting majors on a given team the less points that team tallies. How many man-games does having an enforcer save a team? Well: 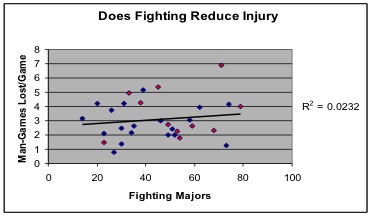 There are off ice issues to consider as well. Employing an enforcer takes up a roster spot which could otherwise be used on a player with the ability to positively impact a game. That roster spot could be used for a young player getting his feet wet in the NHL. It could be used for a depth veteran who, in the case of injury, could slide up the lineup without embarrassing himself or hurting the club. An enforcer does not have this ability.

For these reasons, the Dallas Stars shouldn't waste their time trying to force a fighter into the lineup. Luke Gazdic's name was dropped recently on The Ticket as a possible roster candidate if they need "toughness". If the Stars feel that Gazdic can be a viable NHLer then absolutely he should get a shot. Given the Stars forward depth in Austin, the reasoning for his name being mentioned is obvious: fighting.

The Stars can't afford to waste a roster spot on a player that can't contribute in some way. Not only do they need the depth to protect them in the case of injury, but they aren't a good enough team to be able to give away goals needlessly. There is no benefit to forcing an enforcer on this roster. If they are dissatisfied with the bottom six options they have plenty of other potential routes they can choose waiting in Austin.

Just say no to a goon for goon's sake.