Some quick thoughts on Jagr's debut skate with the Dallas Stars.

On Friday, more than a few media outlets sent camera crews to Frisco for the highly anticipated debut of the newest Dallas Star, Jaromir Jagr. Even in the middle of the workday a good number of Stars fans arrived for the informal skate, and with most of the NHL roster on the ice most eyes kept looking to the door for one who had yet to show.

Arriving late the night before from a transcontinental flight, Jagr was unable to make the skate. While the crowd was mildly disappointed, fans got the chance to see Derek Roy and Ray Whitney skate with the team as well as new defenseman Aaron Rome.

There was a bit of a surprise in store as Jere Lehtinen laced up the skates to lead the drills, along with Stu Barnes. 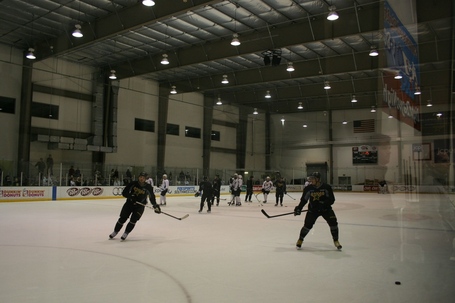 Lehtinen certainly looked like he was still very much in NHL shape, not looking anywhere out of place with the current Stars players. There were plenty of laughs and smiles during the brisk and high-energy skate, that simulated many of the drills we'll be seeing during camp this week.

With Jagr's debut pushed back a day, it seems as if anticipation for his first skate with the team reached a whole other level on Saturday morning. The largest crowd I've seen yet at the DP Arena for a Stars skate gathered to watch Jagr take the ice for the first time with his teammates. 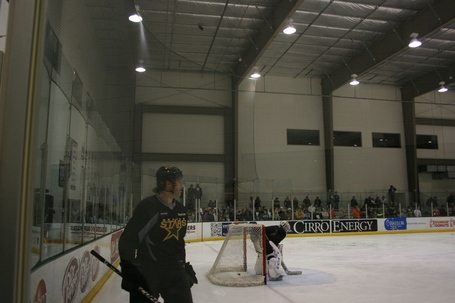 I've created an album of the best photos I had from the weekend, which you can find here.

It's tough to really gauge anything from drills like this, but the team certainly appeared in extraordinarily high spirits. It was high energy and fast-paced, although only 14 or so players were on the ice Saturday. Jagr certainly still has extraordinary skill with the puck as he stood head and shoulders -- literally and figuratively -- above the rest of the team when it comes to putting the puck in the net.

Jagr met with the media following the skate in what was a fairly surreal scene: eight or so cameras set up on the inside of the doors to the ice, with around a hundred fans packed against the glass recording the press conference with their phones.

Here is video of the press conference as well as some great footage of Jagr on the ice.

There's no doubt that Jagr brings a level of energy and mystique to the Stars that we have not seen in a very, very long time. The Stars will instantly be on the national and international radar because of his presence alone, and that is very apparent just by feeling the buzz amongst the Stars fans there this weekend.

There is a growing optimism about the Dallas Stars this season, and there is a feeling that while the Stars may have added some age -- the presence of Whitney and Jagr will have a bigger effect than just what happens on the ice.

Watching Whitney walking through the locker room, you'd think he was an assistant coach. He commands the room and he brings an energy this team is desperately needing. We'll have more on him later this week.

This was a great weekend for the Stars, although everyone could not help but continue to think of one person noticeably missing: Jamie Benn.