The upcoming NHL draft holds some very real potential to land a franchise-defining player for the Dallas Stars, but there are certainly risks involved. Just how safe should the Dallas Stars play it with their pick at No. 10, however?

Share All sharing options for: 2013 NHL Draft: On the Dallas Stars, Elite Prospects & Playing It Safe

As always, being in the top half of the first round of the NHL Draft lends itself to some interesting decisions having to be made by the Dallas Stars draft braintrust. This draft in particular is one that could have very important ramifications on the future of the franchise, not only because of how deep this draft could potentially be but because of where the Stars are in the building process and the needs of the organization.

While it may be a bit unjust, there is a fair amount of pressure on the Dallas Stars to really get this one right.

This is the first draft under new general manager Jim Nill, although Les Jackson will carry out the draft strategy of the Dallas Stars once again. Joe Nieuwendyk made certain the Stars paid close attention to the the importance of the draft and related assets, yet Jackson should get just as much credit as the departed GM for his role in rebuilding the Dallas Stars prospect pool. Yet with Jim Nill now ultimately in charge, it's unknown exactly how the Stars draft strategies will change -- if at all -- and especially in the first round.

This draft has been compared, time and again, to that magical 2003 draft that seemed to create the NHL landscape as we know it today.

When determining the needs of the Dallas Stars, it's apparent that this organization is starving for truly elite, blue-chip prospects. This isn't about organizational rankings on Hockey's Future or Hockey Prospectus, this is about putting together a team that can actually compete not just for the postseason but for the Stanley Cup as well. Every team that makes it to the highest level has one thing in common -- there are some truly elite players on those rosters.

The Dallas Stars have two players capable of rising to that level in Jamie Benn and Loui Eriksson, but from top to bottom the NHL roster and organization is mostly made up of very good prospects with the potential of hopefully becoming great.

Bob Sturm breaks it down:

I am still holding out hope that Jamie Oleksiak can be a dominant top pairing defenseman when he has had enough time in the oven. Brenden Dillon took such strides these last three years that I wonder if we are foolish to act like we know his ceiling.

Brett Ritchie has been described as a player with fantastic upside and there are other kids in the system that could be better than "solid." As it stands, the bin marked "solid" appears to be full and in great shape.

But the bin that allows a team to compete for Stanley Cups is marked "elite," and while there might be some potential in that bin, for the most part it is where much of the league sits normally - close to empty.

The Stars know this. They know they have lots of 6's and 7's, but they need a 9 or a 10 to make this thing really sing. Of course, that is like a football team saying they are a Tom Brady away from being a great team. That is both obvious and ridiculous - but it is often true.

Logic holds that picking up "elite" talent comes in only one of three ways: the draft, trades or free agency, and the best and easiest way to pick up such talent is by holding onto a top three pick in the draft in most years. In most years.

There's no doubt that in this draft, there are three or four players that are going to be superstars in the NHL -- as close to sure-thing projections as their can be when it comes to prospects. What sets this draft apart is the potential that rests in the remainder of the first round and the talent level that permeates all the way from No. 5 to No. 20.

This draft has been compared, time and again, to that magical 2003 draft that seemed to create the NHL landscape as we know it today. That 2003 first round is so revered that it seems as if it was impossible to miss in that first round, that all you had to do was pick the best player available and a franchise level player would land in your lap. As good as that draft was, however, there were still some very notable busts.

This is the challenge that lies ahead for the Stars.

Here is the first round from 2003, in order of selection.

Now, a few things stand out about this draft. First, it's interesting to see how many of these players are no longer with the team that drafted them. Second, while this was certainly a very deep first round there are some very notable misses slipped in there as well. Finally, that the Dallas Stars significantly missed out on an elite talent by playing it safe.

Placed right in the middle of all of those well-known names are a few standout busts. Hugh Jessiman played in just two games in the NHL, with the New York Rangers passing up on players like Seabrook or Brown to nab him. Some may consider Zherdev a bust because he didn't turn into an NHL star, but he did have 261 points in 421 NHL games before finally heading to the KHL for good. 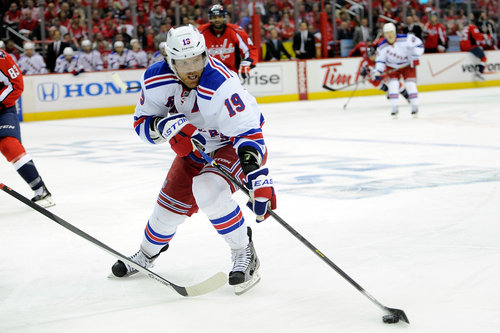 We take a look at a preliminary list of possible buyout candidates and whether they'd be a good option for the Dallas Stars this summer.

Stars fans should remember this was the year the Dallas Stars traded the No. 28 pick to the Anaheim Ducks for two second round picks. The Ducks selected Corey Perry, and the Stars selected Vojtech Polak and B.J. Crombeen with those picks. This was a Doug Armstrong special, attempting to pick up more value in a deeper draft by choosing to pass up on talent in the first round.

While the Stars ultimately were able to get Loui Eriksson in the second round (with a pick acquired from trading Grant Marshall), it's painful to look back and think of what the Stars could have been with Perry as well as Eriksson.

So, this is the challenge ahead for the Dallas Stars. There are zero guarantees in the draft and even with most expecting this year's draft to be exceptionally deep, there is nothing that says a team can expect to get a Dustin Brown but ends up with a Hugh Jessiman -- all picks are made with the best intentions. At the same time, however, you run the risk of passing up on a Zach Parise in favor of a Steve Bernier -- one is a solid NHL player, the other is an elite and game-changing forward.

In both 2011 and 2012, the Dallas Stars ended up with two very good prospects in defenseman Jamie Oleksiak and center Radek Faksa and both will play a major part for the Stars in the future. Yet in each case there was argument to be made that the Stars passed up on higher-reward players by not only going for a needed position, but by going for a player with a higher floor rather than a player with a potentially higher ceiling.

This was most evident in 2012; Radek Faksa was a highly touted center prospect regarded as a decent playmaker but mostly a very good two-way player. He wasn't expected to fall to No. 13, yet he did, and the Stars pounced on a player that projected to be -- at most -- a No. 2 center in the NHL with the safe bet he'd be a No. 3 center at the very least. While doing so, the Stars passed on Zemgus Girgensons, Cody Ceci, Tom Wilson, Tomas Hertl and Teuvo Teravainen -- all players with significantly higher ceilings with potential to be relatively elite at the NHL level.

The past two years the Stars mitigated the risk of landing a complete bust by going with Faksa and Oleksiak -- for a team in desperate need of landing solid players that would almost certainly make it to the NHL, this is to be expected. Now, however, the Stars have a system full of good players but desperately need elite talent.

So now the Dallas Stars face some difficult decisions. Stay put at No. 10 and go with the player at the top of their draft board, or stay put and go for a particular position of need over another. Get aggressive and move up higher in the top ten with the hopes of getting a higher probability of landing an elite player, such as Elias Lindholm. Perhaps, depending on how the picks shake out, the Stars trade down to maximize value.

In each case, we've seen how such moves can work or completely blow up in a team's face.

Risk is impossible to truly determine, however, and some are more adverse to it than others. Can the Stars afford to reach for the stars and end up with one of the busts of the 2013 NHL Draft -- because there will be busts -- or should they once again go with the safe bet? Should they play the dancing game with risk and go for a player that has the potential to be something truly special in the NHL?