Overview: After the Dallas Stars were knocked out of the Western Conference Finals by the Detroit Red Wings in 1998 they set their sights on adding a legitimate top line scorer to complement Mike Modano. They found their man in future Hall of Famer Brett Hull.

He was a perfect fit on Modano's wing. In three seasons playing with Modano, Hull scored 179 points in 218 games. In 55 playoff games Hull scored 46 points. One of those was one of the most controversial goals in NHL history. Hull's game winning goal in the 1999 Stanley Cup Finals is easily the most memorable goal in franchise history, and still makes a lot of people bitter (not that Brett cares, though).

He joined the Red Wings for the 2001-02 season at age 37, but would later come back to be the "Ambassador of Fun", which seems like a joke title you would give to a mascot or an in-arena promotions employee as opposed to one of the greatest players in league history. Oddly enough, the man with the joke title would be given an even stranger title a few years later when he and Les Jackson were named Co-General Managers.

Hull had a short, but memorable, career in Dallas highlighted by this beautiful goal that speaks for itself:

More after the jump...

Brett Hull's biggest attribute was his shot. He could one-time the puck better than anyone in the business. The way he thought the game in the offensive zone made his shooting ability all the more lethal. He had the ability to disappear from plays in the offensive zone only to reappear undefended in excellent goal scoring position.

The irony of Brett Hull scoring a crash creasing goal to win his first Stanley Cup has been pointed out numerous times over the past 13 years. It's a tidy little bow that closes the narrative that says "Brett Hull will never win the big one". This idea misses the point though. He scored from closer than usual, but the goal was pure Hull.

The two screen caps below are from three seconds and one second before he ends game six. The captures are grainy, but you get the idea. In the first one Hull is locked at the hip with the Sabres defender. He notices that the Sabres defender is watching the puck so he did what Brett Hull always did... 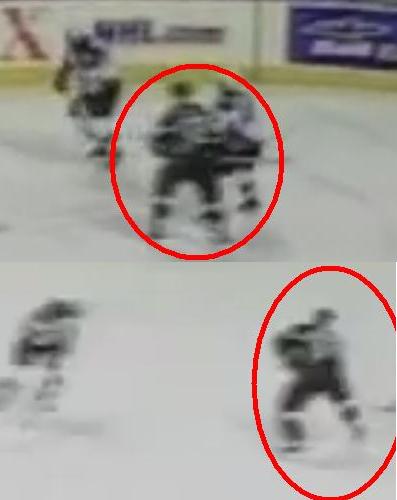 ....he found open ice. When Hull found open ice he was money. The Sabres blown defensive zone coverage afforded him the opportunity to finally get his name on the Cup. As often was the case while he was a Star, when given the chance he capitalized.

On ice accomplishments aside, Hull's personality and charisma were immediate attractions for the Stars fanbase too. He seemed like a genuinely nice guy. He always had an amusing one liner or anecdote for anyone willing to listen. If you ever went to a Stars sanctioned event (like Skate With The Stars) you always got the impression that he genuinely enjoyed where he was at in life. It was easy for the fanbase to see him as an "Ambassador of Fun" when his playing career ended because that was always his personality.

After three very productive seasons in Dallas Hull left to join the Red Wings for his age 37 season. The Stars felt like his most productive seasons were behind him and moved in another direction. Hull went on to score 63, 76, and 68 points in the next three years while missing one game. He definitely had some left in the tank, and you have to wonder how high he would have been on this list had he spent those final three years in Dallas.

Where should Hull have been placed on this list?