The Stars and Blackhawks used to hate each other. The long time rivals celebrated the coming of 1994 with one of the more memorable brawls in Stars franchise history. There were fights throughout the game. The first two both happened within 11 seconds of the puck drop.

The line brawl that made this game relatively famous happened at the 14:24 mark of the third period. Three "official" fights broke out. Mark Tinordi, Derian Hatcher, Steve Smith, Chris Chelios, and Dirk Graham were all involved. Mike Modano even quasi-participated (photographic evidence after the jump). Wonderful youtube user jeffk925 (which sounds suspiciously familiar) uploaded video of all of the fights:

The Stars did end up winning this game 5-2, but it isn't remembered for the results. The blood bath is the key. After the jump the full extent of the bloodbath will be laid out.

When I began thinking about this game my immediate reaction was that this was the first game I ever attended. I was wrong of course because these two teams have had a few brawling affairs. My first was in 1995 when Shane Churla had his entire upper body stripped bare. This one might not have such a symbolic moment, but there were some funny ones. This one in particular stood out when going over the video. Shane Churla punching a linesman in the back of the head: 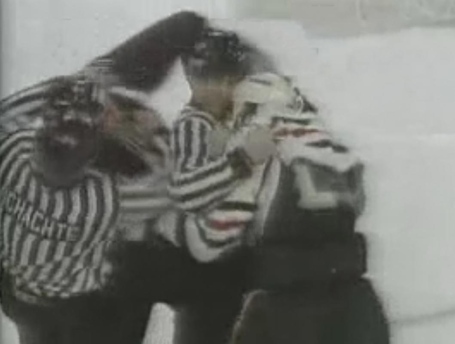 This is only one of the six fights from the game. The full fight card is below.

Some pretty big names got in on the fisticuffs. One name involved multiple times, Jim McKenzie, I had no idea he had ever even been on the roster. The storied Dallas Stars career of McKenzie completely escaped my young hockey mind.

The penalty count ended up being pretty impressive too. Eight Dallas Stars combined to rack up 112 minutes in penalties. Seven Blackhawks racked up a measly 69 minutes. Instigators and game misconducts add up quickly. Tinordi, Hatcher, Craig, Smith, and Darin Kimble all received misconducts for the line brawl in the third period. Chelios actually managed to get called for fighting, roughing, and hooking simultaneously.

We can't pass by this game without mentioning Mike Modano. He was on the ice for the line brawl. Watching Modano in the video is loads of fun. He's desperately clawing at the backs of different Blackhawks, but it's obvious he wants little to do with the actual fighting. Here he is watching Derian Hatcher pummel Dirk Graham: 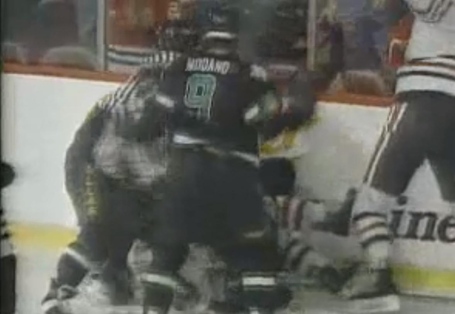 This was obviously not the last brawl the Stars would get into, but it was among the first events that made the Stars appeal to the Metroplex. The typical narrative is that people in Texas like hockey, and in particular hitting, because it makes them think of football. I don't know how much I buy into that, but if you do the significance of this game is hard to ignore. The Stars announced their physical presence with authority, and further developed their relationship with north Texas.