The Numbers Behind the Numbers: The Dallas Stars Defense

Share All sharing options for: The Numbers Behind the Numbers: The Dallas Stars Defense

Change has been the theme of the offseason for the Dallas Stars, and one needs to look no further than the defensive group to see that. Last season, the Dallas blue line struggled, with a few exceptions. Veteran Sheldon Souray was effective playing a pretty tough defensive role, and Alex Goligoski was a solid two-way defenseman on the second pairing (although his level of play regressed from the 2010-11 season after the acquisition from Pittsburgh). Late in the season, rookie Philip Larsen stepped up to play a top-four role, and he did a pretty good job at it. However, beyond that, Dallas didn't get many standout performances from their defensemen.

Stephane Robidas did reasonably well playing against top opposing players, but he isn't a top pairing defenseman at this point in his career. Robidas's effort and work ethic will never be questioned, but his physical style of play has taken its toll. Trevor Daley, the smooth-skating two-way defender, struggled for much of the season in his own zone.

The most significant problem last season, however, was the lack of depth. Just like with the forwards in Big D, many of the defensemen struggled playing more minutes than they probably should have. UFA Signing Adam Pardy was a major flop, and Mark Fistric was largely ineffective (although his Youtube highlight reel is chalk-full of thundering body checks).

Kari Lehtonen is a world-class goaltender, but he is only going to be able to steal so many games. The Stars are still missing a top four defenseman (something they are looking to rectify at this moment in time), but their defensive group should be better in 2012-13.

As mentioned above, Souray and Robidas combined to form the shutdown pairing for the Stars last season. Souray leveraged his strong campaign into a three-year contract with the Anaheim Ducks. The Stars would have liked to bring him back, but not at that term. Souray has battled through his fair share of injuries, and Dallas doesn't want to block the pipeline up from the AHL. The Stars have several prospects that play a similar game to Souray, and locking him up for three years would do nothing to help any of them get acclimatized to the NHL game. 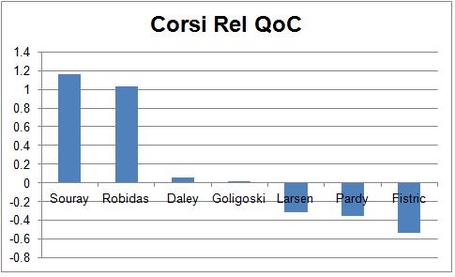 Goligoski and Daley saw the opposition's second and third offensive units. Goligoski wasn't brought in to be a shutdown defenseman – he's a puck mover in every sense of the word. Daley skates very well, but he isn't as offensively talented as Goligoski. The Stars have made a point to single these two defensemen out as big parts of the team's core, and Daley in particular has been very active in the community in Dallas. That being said, they need better on-ice performance from him. Goligoski will continue to play relatively easy minutes so his skating and playmaking are best utilized. He is a prototypical power play quarterback, and has zero competition from within the Stars organization for that position for the foreseeable future. 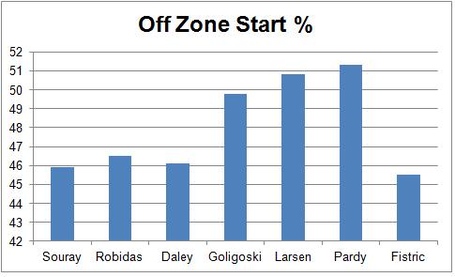 Larsen and Fistric played the bottom pairing minutes (they were the only other two defensemen to suit up for at least 40 games last season). However, Larsen's responsibilities increased after Nicklas Grossman was traded to Philadelphia. Larsen did well playing a two-way role, as he was able to use his mobility and hockey sense to make the reliable play most of the time. Many believe he has some untapped offensive potential, but young defensemen typically take a few years to get the defensive side of things figured out first. It would be great if Larsen stepped up and took over a top-four spot on a full-time basis this season. 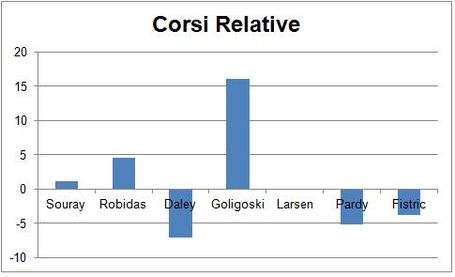 Daley struggled defensively last season, while Goligoski had very solid possession numbers. While Goligoski was on the ice, the Stars enjoyed a positive shots directed at net differential of 16 (a very good number). Pardy and Fistric really struggled considering the weak competition they played against.

Fistric was brought back on a one-year deal, but he will be in a battle at training camp just to make the roster. As mentioned, he struggled last season against weaker competition. If he doesn't improve, he could simply fill the role of stop gap until Patrick Nemeth or Jamie Oleksiak are ready for NHL duty.

Pardy was a huge liability, even in a depth role, and Joe Nieuwendyk was able to correct his mistake by sending him to Buffalo along with Steve Ott.

Prospects Jordie Benn (three games) and Brenden Dillon (one game) were the only other defensemen to suit up for the Stars for action in 2011-12. Benn could see a few games here and there this season, but Dillon is the young defenseman to watch in Dallas. Everyone in the Stars organization is excited about him, and for good reason. In the past three years, Dillon has gone from depth WHL defenseman to WHL star to AHL rookie to AHL star. He is 6-3 and 220 pounds, but thanks to a late growth spurt, he was forced to rely on his hockey sense and skating ability from a young age.

As things stand right now, Dallas is going to return largely the same defensive group as last season. However, I would be shocked if they didn't add a top four defenseman before the season starts (whenever that may be). There are several targets – Jay Bouwmeester in Calgary, Keith Ballard in Vancouver, and Douglas Murray in San Jose, among others. That being said, the Stars want to keep some spots open for their young defensemen.

The top four will feature Robidas, Goligoski, and Daley. After that, things are wide open. The Stars hope that one of Larsen or Dillon is ready to step in and fill the void. Veteran Aaron Rome was signed in July after spending the past few years with the Canucks. Rome is a steady bottom pairing defenseman who makes a decent first pass and plays with consistent physical edge.

Dillon and Larsen are both likely ready for the NHL, but good teams never rush prospects, nor do they ever promise roles to young players without them being earned.

It will be interesting to see who gets the tough defensive assignments. Robidas will likely fill one half of a shutdown pairing, but it is an unknown as to who fills the other spot. Daley isn't ideally the defenseman you want out against the top opposition – he's better off in a secondary defensive role. Rome plays well in a depth role, but he gets exposed against faster and more skilled forwards. Larsen is the real wild card. He played like a top four defenseman for a few months last season, but can he translate that to the rigors of a full season?

The Dallas defensive group may not be a lot better in 2012-13, but the pieces are in place for significant improvement over the next few years. Dillon, Nemeth, and Oleksiak, in particular, all have top-four upside. Nemeth could be playing in the NHL this season if he is able to adjust quickly to the North American game.