Once again it's that beautiful time of the year when EA Sports ramps up promotional efforts for their latest NHL release. NHL 13 comes out on September 11th, and both the full set of overall player ratings and demo are available.

In the preview videos leading up to the release of the game the developers discussed changes to the ratings system, various gameplay changes, and upgraded game modes.The game mode changes aren't yet accessible, but from what has been made available the changes from NHL 12 to NHL 13 are fairly large. After the jump we'll have the Stars individual player ratings and some observations from the demo. Click below to enter the world of complete sports video game nerd-dom if you can stomach doing so.

EA revamped the ratings system as a whole to make things clearer when trying to make roster decisions. How those ultimately impact the overall ratings is anyone's guess at this point, but we do have the overall ratings available. The graphic below The Stars highest rated player is a three-way tie between Kari Lehtonen, Jamie Benn, and Derek Roy at 86 overall. 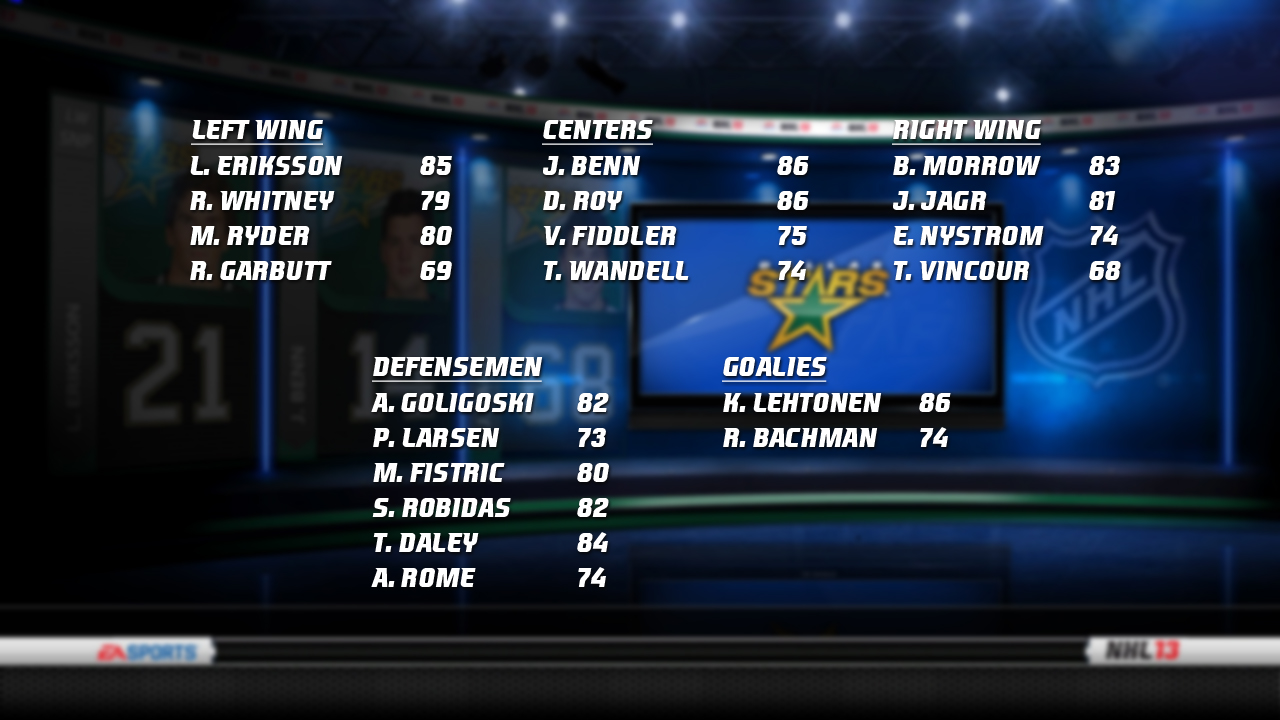 Image from the HF Boards

It would be unfair to comment too much about what the overall ratings mean without being able to see the individual skill ratings assigned by EA, but it's very obvious that EA tried to make sure player "tiers" were established. The ratings that really jumped off of the page to me were the guys in the bottom six and depth roles. The table below compares the rating of each player on the Stars current roster from NHL 12 to NHL 13 sorted by the change in rating.

Decreasing the ratings of this group of players en masse isn't justified if they're using the same scale they used last year so, obviously, they aren't. With this apparent new scale what they seem to be saying is that the Stars lack a true elite talent, but have a deep top six. I do agree that they're deep in the top six, but they have some elite talent. It seems that Jamie Benn, Loui Eriksson, and Kari Lehtonen should all be bumped up a bit, though without seeing the full assigned skill values who really knows?

The new rating system leaves some questions unanswered at this point, but the demo EA released on Monday answers many gameplay related questions. Three major changes stand out in the demo. The new skating dynamics, smarter computer AI, and improved goalie physics are all very encouraging.

Skating has been flat for years. In NHL 13 you are able to control the speed of your skater by controlling the level of force you apply to the left thumb stick. I was skeptical of how much of a difference this would make, but the demo alone makes me a believer. The options it opens up are unique and interesting.

For instance, you can glide into the offensive zone then skate with a burst the the slot if you lull a slow defender into a trap. In your own end you can pass from the defense up to a streaking forward. As the pass is going you can control the speed of the forward and be at top speed when he gets the puck to blow by a defender. I got one breakaway with Anze Kopitar where I was going so fast by the time I got to the net that Martin Brodeur had no prayer. It's a very dynamic system that is going to be fun to work with over the next year.

Last, but definitely not least, are the computer AI improvements. The demo doesn't allow much AI freedom since you don't have the ability to edit plays, but the offensive acumen on display by the computer is 1000% improved. They don't simply whip the puck around quickly as in past games.They make intelligent hockey plays. The defensemen don't hesitate to get the puck up the ice to uncovered forwards in the neutral zone, the players get the puck to the net, and they all actually seem to stick to their assigned systems.

Eventually there are bound to be some problems, but the demo doesn't really have any. It's a crisp game, and the improvements seem to be incredibly well thought out. The skate stick alone will make it worth checking out even if you aren't a serial NHL series purchaser.