Dallas Stars Logos & Jerseys: How Do You Feel About Possible Changes?

Share All sharing options for: Dallas Stars Logos & Jerseys: How Do You Feel About Possible Changes?

Ever since the Dallas Stars unveiled the current jerseys in 2008, along with the new Reebok designs, fans have been waiting for the next change to happen. While it was clear what the team was trying to do at the time it was painful to see the team go from having perhaps one of the best jersey designs in the NHL, to one of the blandest jerseys we could have imagined.

While the current black and white jerseys have grown on us over the years (especially the alternate with the STARS logo) it's painfully clear that fans are ready for a change. The question that we here at DBD get asked the most about, hands down, is not just whether the Stars are going to be introducing new jerseys soon but more importantly -- will those new jerseys be green.

There's been a lot of discussion about possible changes and with Tom Gaglardi now the owner of the Stars, it's possible that more than just the team's jerseys will change -- it's certainly possible that changes to the logo and color scheme will change as well. Any change that happens won't be implemented until the 2013-14 season, yet because of the time it takes to get such changes approved it's likely the team is currently considering several options.

If the team is considering a drastic change in color scheme and a change in the logos, I think that there is one very important thing that needs to be kept in mind-- how the fans will feel about such a change. Because I can guarantee you one very sure thing: any change that does not include green as the primary color will be met with disdain, anger and outright ferocity by nearly every single Stars fan across the globe.

My further thoughts after the jump.

Rumors have flown about the past few months about what changes the team is considering, including a return to the green and gold color scheme that fans adore as well as a drastic change that could resemble the red, white and blue combination suggested by Daryl Reaugh last year.

We wrote about this back in April, but this is what Razor suggested for the Stars under their new owner: 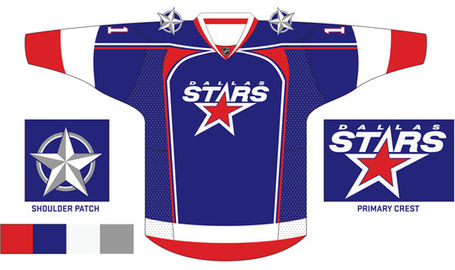 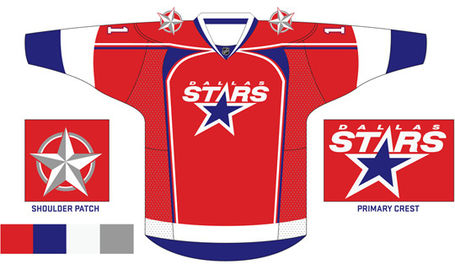 I'm not going to rehash everything I said in that post, which you can read here, yet I am going to share my personal feelings on drastic change to the color scheme and what that would mean for this franchise moving forward.

Sports franchises have an identity, one that is forged by the players, achievements and the jerseys the players wear on their backs. More than anything, however, that identity is directly tied to the aesthetics found in the color scheme, designs and logos associated with that team over a long period of time. For the Dallas Stars and the team's fans, that identity is tied to the traditional "STARS" logo and the color green that has been a part of this franchise since the team resided in Minnesota.

When the Stars first moved to Dallas, the team went to a primarily black and white design with green piping on the sleeves and mid-section. As the team progressed through the 1990's and into the best years this franchise has ever known, the color green began to be featured more and more prominently in logos and merchandise, buoyed by the incredible popularity of the team's new third jersey. So popular was that jersey that the team made the permanent switch to the "Star" jersey we now associate so grandly with the Dallas Stars and the time this franchise achieved the greatest honor in all of hockey.

Those jerseys were not just the team's identity, they were absolutely unique to the NHL and perhaps the sharpest in the league. The shade of green used was not found anywhere else in the league and that specific combination of Green, Gold and White was unique across nearly all teams in all sports.

Which is why the introduction of the "Mooterus" was met with such outrage. Not only was it a tasteless change in logos, but it took the team away from the colors and identity that fans had come to associate themselves and the team with. What really led to this jersey being so universally panned was the introduction of a color scheme that had never once been associated with the Dallas Stars franchise - red, gold and green.

Now we're on the precipice of another potentially drastic change for the Stars and it's understandable why the change is being made.

This isn't about correcting the "wrong" that is associated with change to the Reebok jerseys and the current designs, it's about forging a new identity under a new owner and the new direction the team is headed under Jim Lites and Tom Gaglardi. And you can see why that change could be both very good and positive, and possibly incredibly disastrous.

When teams aim to create a new visual "identity" they don't look for tweaks here and there, they go for a massive overhaul to everything associated with the team. Logos, color schemes, designs -- the works. We've seen it countless times across every league for countless teams -- the Dallas Mavericks and the Texas Rangers have both undergone significant changes in the past 15 years.

A change in the logo is something I think fans could live with. The traditional "STARS" logo is certainly iconic, but aside from the doomed Mooterus nearly every logo the Stars have employed has been sharp and classy and instantly makes one think of the Dallas Stars when seen. It's the change in the jerseys themselves that have fans so worried.

Whether the Stars find a way to revert back to the "star" design on the jerseys is irrelevant, because it's not the design itself that fans are so attached to -- it's the colors. It's that dark color of green that we associate so closely with Dallas Stars hockey and it's clear that this is what fans want so badly.

One only has to follow the massive amounts of mock-up jerseys that fans put online every week to see just how passionate Dallas Stars fans are about returning to the roots of this franchise and what we so closely associate this team with. And it's not as if fans want just green. Fans would certainly be open to any combination of green, black, white, gold and possibly even silver -- as long as green was one of the primary colors.

Not red. Not blue. Not green and red. Not red and blue. Green.

There's lots of talk about about the Stars joined the rest of the sports teams in Dallas in having some combination of red, blue and silver. The Mavericks, Rangers and Cowboys all use such a color scheme -- which was the basis for the design that Razor suggested. Judging by intense reaction to such a change, it's easy to see how fans would react if the Stars did in fact aim to align themselves to the rest of the area's teams.

What's interesting in all of this is that Lites and Gaglardi could become heroes in the eyes of Stars fans everywhere, by introducing a brand new color scheme built around green with a new jersey design that is drastically different than what we have now. The logo could even change and fans would love the new direction -- because green had returned to the Dallas Stars. Such a change would accomplish exactly what the team seems to be aiming for; forging a new identity under the new owner with new logos and new jerseys.

When crazy changes happen that fans refuse to accept the general response is "wait and let it grow on you," yet sports history is full of teams that attempted such drastic changes only to see the team turn around and alter the colors and logos just a few years later because of fan backlash. The Stars went through this very thing just earlier this decade.

Finding a new identity as a franchise is certainly understandable, but abandoning all that came before could be severely detrimental to new ownership. Embracing the history of this team, especially the short and intimate history this team has in Dallas, is the perfect way to forge a new direction for the Stars while maintaining the desire for change so many are holding onto.

But there's also the very important fact that this team has a very rich and storied history so far in Dallas and while fans understand the need to move forward into a new era, no one wants to completely abandon everything that makes us remember those glorious years. Even the original jerseys and color scheme worn by the Stars from 1993 to 1999 were unique to this team.

Change the logo, change the jerseys, but don't take green away from us.