On March 13th, 1998 the awful Mighty Ducks of Anaheim strolled into Reunion Arena to take on the Central Division leading Dallas Stars in what should have been a meaningless late season game. The Ducks were going nowhere and in the midst of a seven game losing streak. The Stars were virtually a lock for the playoffs at this point.

With 4:12 left in the third period the Stars had a 5-1 lead when Craig Ludwig squished Teemu Selanne's head against the boards with an elbow. The ensuing line brawls made this game worthy of being #5 on our list of the Dallas Stars top regular season games.

The brawls are hockey folklore at this point. The fighting ended up overshadowing the game when the history was written. Buried amongst the scorched earth was Joe Nieuwendyk lighting the Mighty Ducks up for four goals. This game had just about everything, and is easily amongst the top five games I ever attended. The incredibly nostalgic fight card is after the jump.

The boxscore and fight cards for this game don't really do it justice. The image that sticks out to me from this game is looking at the benches after the incidents took place. I was sitting in the second deck behind the Stars goal probably five to ten rows behind the railing. I looked over at the benches and there might have been 20 players remaining between the two teams. My memory is bound to be sketchy at this point, but I don't think I'm far off in this case.

As I mentioned before the jump, the melee began with a Ludwig elbow to the head of Selanne. The hit is in the first twenty seconds of the video. If that hit happened in today's NHL the hitter is looking at a lengthy suspension. Accordingly the Ducks responded with violent indignation. The fight card is pictured below:

The initial brawl had two official fights and loads of penalties. It didn't take place until after the faceoff though. The Ducks wanted blood. The Ducks on the ice followed Ludwig to the penalty box. The Ducks on the bench then tried to get at him as he was escorted to the locker room after being kicked out of the game. The first shift after the incident was destined to be chaotic.

Craig Muni squared off with Warren Rychel and traded jabs. Darryl Sydor (regrettably) turtled twice in a fight with Brent Severyn. Drew Bannister, Sean Pronger, Greg Adams, and Guy Carbonneau all received roughing minors for their parts in the fracas. Rychel and Severyn both picked up instigators. It's no secret what that group of Ducks was on the ice to accomplish. The refs knew it and acted accordingly.

Sydor had a funny moment between the two line brawls. After Severyn threw him to the ice he chased after the pack and jumped on the back of an unsuspecting Duck: 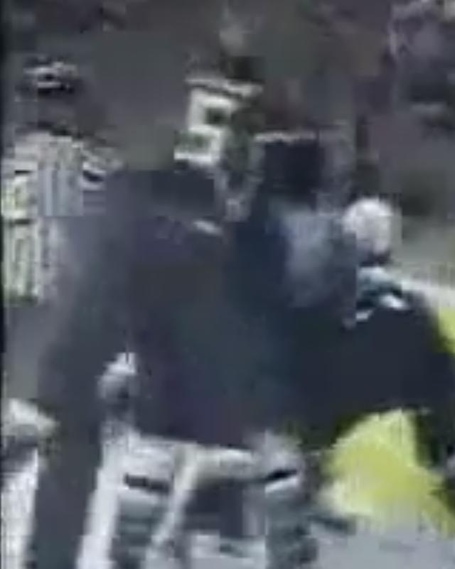 The second round of fights began off of the next faceoff. This time the Stars picked up the instigator. Jason Botterill, highly respected assistant GM of the Pittsburgh Penguins, beat up poor Steve Rucchin. That fight was the only fight of Rucchin's career. He predictably had no chance of not looking ridiculous. Ruslan Salei and Dmitri Mironov of the Ducks took on Grant Marshall and Pat Verbeek in this round too.

The game ended 6-3, but few remember that. Few also remember that Joe Nieuwendyk had a four goal game on his way to a 39 goal campaign. As great of a game as he had it will always be remembered for the melee. These fights were instant legends at the time, and undoubtedly made for some interesting locker room exchanges when Severyn joined the Stars for the 1998-99 Stanley Cup run.