Now that the dust has settled on a busy July for the Dallas Stars, the roster is starting to take shape. Up front, the forward lines will sort themselves out in camp. The only real issue revolves around Derek Roy and his shoulder injury. On the back end, however, there are still many question marks. The Stars would love to bring in a top pairing defenseman capable of complimenting Alex Goligoski’s offensive abilities. More realistically, Dallas will look to bring in a proven top-four defenseman with a wart or two (a bad contract, for example) at a reduced cost.

There are two ways to acquire proven talent –via the free agency route, or through a trade. Let’s take a look at a few defensemen who are either free agents or trade candidates.

Why? Ballard is a proven top four defenseman, having played significant minutes for both Phoenix and Florida. Since coming to Vancouver, he has struggled to adjust to the up-tempo playing style of the team, and quickly found his way into coach Alain Vigneault’s dog house. Ballard is a great skater who brings a consistent physical edge to the ice. His cap hit of $4.2 doesn’t reflect his performance over the past few seasons, and for that reason Dallas may be able to acquire him for less than cost.

He is well-liked as a teammate and has a terrific sense of humor – he is one of the best interviews on the team. He started to settle in nicely last season playing with Chris Tanev – Ballard is a left side defenseman who has struggled when the Canucks have tried to shift him over to the right.

Why not? Ballard has struggled at both ends of the ice since coming to Vancouver in the summer of 2010. His offensive production has been non-existent, thanks to a lack of power play opportunities and a lack of confidence. He would likely benefit from a change of scenery, and would bring a lot to the Dallas back end. However, he needs to regain his form of three years ago before being considered a bona fide top four defenseman.

Why? Bouwmeester is a top pairing defenseman capable of logging extremely difficult minutes. He has been an offensive flop for the Calgary Flames, but he does the heavy lifting for an undermanned (talent-wise) defensive group. Bouwmeester is a phenomenal skater, and he uses it to excel defensively, whether it be controlling his gap or positioning in his own zone. He isn’t an offensive defenseman – he was productive in Florida with significant power play opportunities, but he doesn’t read the play like a true power play quarterback.

He would immediately become the best defenseman in Dallas, and he would eat up 25 minutes of ice time per night, freeing up Trevor Daley and Stephane Robidas to play roles more within their means.

Calgary would be looking to dump off cap space, and could be interested in a Dallas prospect or two, plus some picks. Bouwmeester’s contract runs for two more years, and at that time it is likely that Patrick Nemeth or Jamie Oleksiak would be ready for full-time NHL responsibilities. However, teams like Philadelphia and Detroit are sure to be interested in the big defenseman should he hit the trade block.

Why not? On the surface, trading Bouwmeester makes little sense for Calgary. Sure, they have nine defensemen signed to one-way contracts, but Bouwmeester is their shutdown defenseman and he sees the toughest minutes on the roster. Dennis Wideman, Calgary’s big UFA signing this summer, is a completely different player than Bouwmeester (Wideman is known for his shooting and power play abilities – his own zone play leaves much to be desired).

Why? Murray would be a welcomed defensive presence for the Stars, who have lost both Sheldon Souray and Nicklas Grossman since last season. His game is simple and straightforward. He hits, he defends, and he moves the puck well for a big guy. He could be expendable in San Jose with the Brad Stuart acquisition and the emergence of Justin Braun. Murray’s cap hit is very reasonable, as well (which may make it harder to acquire him for below market value).

Why not? Murray isn’t a top pairing defenseman, and it is debatable whether or not he is a top four defenseman. On Dallas, he most certainly would be. Murray would act as a stop gap to let the young players in Dallas develop for another year. San Jose would likely prefer to move their smash mouth defenseman outside of the division if they were to trade him.

Why? Hjalmarsson is a skilled two-way defenseman who would be a great partner for Goligoski on the top pairing. He isn’t a top pairing defenseman, but he can handle 22 minutes a night in a variety of situations. The Hawks were rumored to have been shopping Hjalmarsson earlier this summer, which means he could still be available for the Stars to acquire.

His cap hit and contract term are both very reasonable.

Why not? Chicago only moves Hjalmarsson if they can get a center back in a trade. I don’t think Tom Wandell carries that sort of trade value. Perhaps the Hawks would be interested in a prospect like Scott Glennie. Either way, it is tough to see a fit between Chicago and Dallas.

Why? Martin is a steady two-way defenseman. He isn’t an offensive dynamo, but he moves the puck well and a pairing with him and Goligoski on it would be very adept at getting the puck up the ice very quickly.

Why not? After trading Zbynek Michalek away and missing out on signing Ryan Suter, the Penguins back end isn’t as deep as it once was. They boast several high end defensive prospects (most notably Joe Morrow and Simon Despres), but it would be a shock to see them move another veteran defenseman this summer. 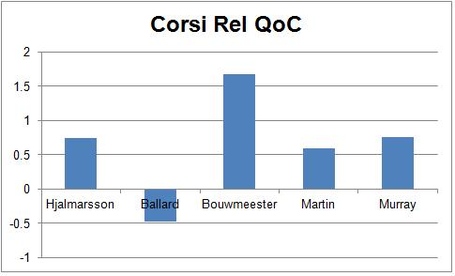 Not surprisingly, Bouwmeester faced the toughest competition (by far). Ballard was given the easy minutes in Vancouver, while the other three defensemen were handed second pairing defensive responsibilities. 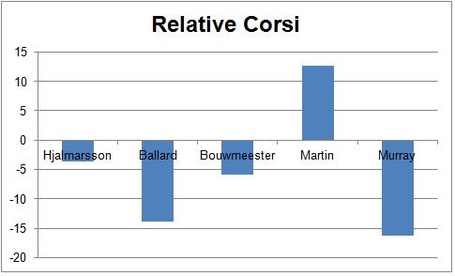 Only Martin had a positive Relative Corsi number among the five defensemen. Bouwmeester's low number is explained by the tough minutes he played, but the other three defensemen don't have the same excuse. 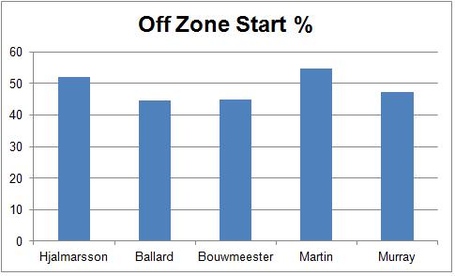 Why? The 33-year-old defenseman has yet to be signed. He was traded from New York to Phoenix in 2010-11. Rozsival scored only one goal in 54 games with the Coyotes last season, adding zero points in 15 postseason games. His season ended minutes before his teammates’ did. In the 2012 postseason, Los Angeles captain Dustin Brown hung a leg on Rozsival, knocking him out of the game (something I am sure many Stars fans are all-too-familiar with). The injury looked to be quite serious at the time, but there was no structural damage done.

Why not? Rozsival has seen his fair share of injuries over the past few years. He isn’t a difference maker, either.

Why? Colaiacovo is still relatively young at 29, and he had a solid 2011-12 season (due in large part to playing with blossoming superstar Alex Pietrangelo). He moves the puck well and is better defensively than given credit for. At the right dollar amount, he would be a solid – but risky – pick up for the Stars.

Why not? Injuries, injuries, and more injuries. Colaiacovo is one of the most injury-prone players in the league. He benefitted playing alongside Pietrangelo last year – how would he fare without a defenseman of that calibre?

Why? Clark played all 82 games last season in Tampa Bay, and led the team with 199 blocked shots (good enough for second overall league wide). He would be a solid depth option, but isn’t an upgrade on Aaron Rome (and probably not on Mark Fistric, either).

Why not? At a low price, Clark would provide solid depth. However, he wouldn’t make Dallas better, and the team needs to add a difference-maker on the back end.

Why? Spacek is a veteran who has played in a number of locations – he would be a stop gap (getting sick of that term yet?) until the kids are ready. He scored five goals in 34 games for the Hurricanes last season, although he was placed in a very offensively-oriented role.

Why not? Spacek would provide a bit of a boost to the back end, but he wouldn’t change the complexion of the team a whole lot. 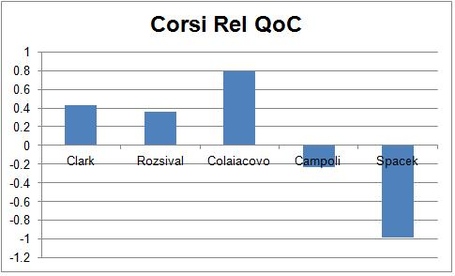 Spacek was given very easy minutes last year, although his data is a combination of his time in Montreal and Carolina. Colaiacovo faced pretty good competition playing on the top pairing with Pietrangelo. Chris Campoli was included just to get another means of comparison. He isn't anything more than a decent #5/6 defenseman. 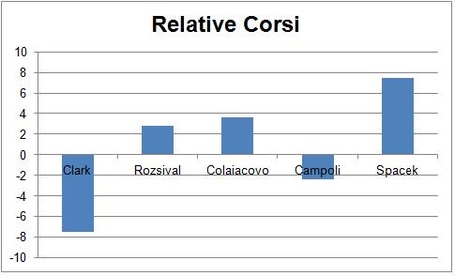 Spacek's possession numbers were quite solid - aided by the easy minutes he played. Rozsival and Colaiacovo also fared quite well in this regard. 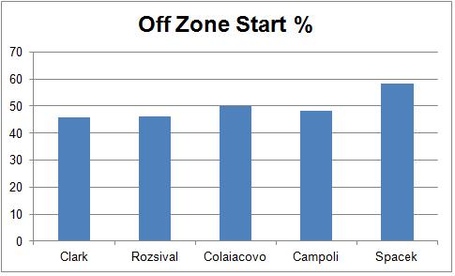 Spacek saw the highest percentage of offensive zone starts. Dallas likely wouldn't be able to create that kind of role for him.

There are several other UFAs, including Scott Hannan, Pavel Kubina, and Matt Gilroy. The Stars are better off keeping a roster spot open for one of the prospects than bringing in a veteran for the sake of it. Colaiacovo makes the most sense if Dallas decides to dip back into the free agent pool.

The team needs to get better on the back end, but to do that they may need to make a trade.