The first day of the 2012 Dallas Stars Development Camp is in the books, with many of the top prospects in the systems making it out to Frisco for the next week to work on skills and drills that help prepare these players for the next level of hockey. This is also a great chance for the Stars front office to get a good look at these players and get a good feel for which prospects are getting ready for the next step in their development.

It is important to note one thing, however: the majority of camp is nothing more than these players taking part in drills and only rarely do they participate in "competitive drills," so it's almost impossible to get a truly accurate feel for how these players stack up. But it is easy to see which skills some players excel at and what they may struggle with, as well as get an idea for which players are pulling away from the others as far as skill and development.

What stood out the most, however, was the positive atmosphere that existed in that building today. You can see that the franchise has taken the time to step back and take a deep breath, that there's a renewed sense of energy and excitement about the future. I was surprised to see so many fans turn out for a prospect camp and more importantly, it was good to see the players respond so positively to the turnout as well.

If I could use one word to describe the atmosphere today around the Stars, it would be "optimistic."

Detailed observations after the jump. 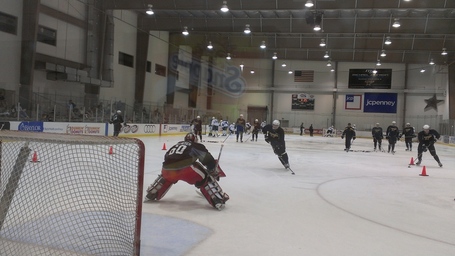 Disclaimer: As I stated, it's dangerous to jump to too many conclusions based on watching players in drills alone. But we're going to do our best, anyway. Also, these are just initial observations and we'll be amending them as the camp progresses.

** I'll get this out of the way now. I am going to exclude Brenden Dillon from my observations and comparisons (as in when I compare defensemen to the group as a whole, he's not in that group.) It's plainly obvious he's ready for the NHL and is so polished as a hockey player I personally don't understand why he was there.

** The first thing that stood out to me about the players on the ice was just how incredibly big some of the prospects on this team are. Matej Stransky, Alex Chiasson, Scott Glennie and Brett Ritchie all have considerable size with Ritchie and Stransky coming in as perhaps the most physically impressive forward prospects the Stars have. Jamie Oleksiak and Patrik Nemeth are also two colossal hockey players, although Oleksiak actually looks smaller when the puck is on his stick and he's skating. More on that below.

** Mike Valley was out with the goaltender prospects, although Jack Campbell, Cristopher Nihlstorp and Tyler Beskorowany all practiced separately this morning and I was not able to catch that session. From what I hear, however, Nihlstorp was extremely impressive in his first day of camp and there seems to be a lot of optimism about his prospects as an NHL goalie. We shall see.

** I was impressed with Grant Rollheiser, an undrafted goaltender out of Boston University who steps between the pipes at 6-4 and 212 pounds. He's a big body in net but he uses his mechanics extremely well and overall was more impressive than Josh Robinson, who was signed by the team to likely provide depth at the ECHL level with the Idaho Steelheads.

** Henry Kiviaho -- didn't see much of him, although it was interesting to see a gigantic advertisement plastered on the front of each leg pad.

** Jamie Oleksiak is about as impressive a defensive prospect as they come, at least in this environment. At 6-7 and around 250 pounds, he shouldn't be expected to be as lithe and fluid on his skates as he is. He also possesses extremely good hands for a defenseman and his puck skills were far and away better than most other defensemen on the ice. What really stands out is just how low he gets to the ice when skating and it's clear he doesn't suffer the same sort of "awkwardness" that other hockey players his size may have to deal with.

** Matej Stransky is a bit raw and is still a few years away from the NHL, but he certainly possesses all of the potential to be special player in the NHL. He's very big, he's a good skater and he has a decent shot (and still needs to work on that release) but where he truly shines is puck protection and puck skills. The comparisons to Jagr are certainly valid; he is more than capable of protecting the puck with his strength and size at the NHL level.

** Radek Faksa looks to be a truly special player. There was a bit of a buzz surrounding him after Team A left the ice, as those in the arena were incredibly impressed with his polished puck skills and NHL-ready shot. His release could rival Jamie Benn's as the best on the team.

** If you were to ask me, however, which forward is most ready for the NHL based on what I saw today the answer would be incredibly simple: Alex Chiasson. He's physically mature, he has an awareness and maturity during drills you didn't see from all the players and he has all the skills that easily set him apart from the rest of the prospects at this point. He'll likely start the season in the AHL, but it certainly seems as if he'll be ready for the NHL sooner than later and possibly before most of the other top prospects on the team.

** Austin Smith and Reilly Smith looked good and were clearly on the "upper tier" of prospects on the ice, but it seems as if they're still a ways off from being NHL ready. This is only day one of a long camp and these were just drills, but it definitely seemed like there was a divide between the Smiths and other prospects in the camp.

** Finally, nothing but good things were said about Scott Glennie. I talked to several people with the Stars organization who all said he's come a long way since last summer, both physically and mentally, and it's clear the Stars are going to be ready to give him a shot at the NHL -- possibly as soon as training camp.

More observations will be up tomorrow after Day 2.