The Numbers Behind the Numbers: The Dallas Stars Top Six Forwards

Share All sharing options for: The Numbers Behind the Numbers: The Dallas Stars Top Six Forwards

Since the 2011-12 regular season concluded a few months ago, the Dallas Stars have overhauled their top six forward group. Gone are Mike Ribeiro and Steve Ott. Jaromir Jagr, Ray Whitney, and Derek Roy have joined Jamie Benn, Michael Ryder, and Loui Eriksson as the players that Dallas will reply upon th supply the bulk of the offense.

The potential bottom six forwards were analyzed in my debut piece last week – you can check that out here.

Will the Stars be a better team with the changes? Let’s find out.

Last season, Benn spent the majority of his shifts playing with some combination of Eriksson, Ott, or Ryder. Ott is one of the better faceoff men in the league – he isn’t a prototypical top six forward, but he helped with Benn’s transition from wing to center.

The second offensive unit was centered by Ribeiro, and he played most of his shifts with either Morrow, Ryder, or Ott.

As you can see from the two charts above, Dallas didn’t have set line combinations for line one or line two. There were a few reasons for that:

1) Morrow isn’t a top six forward at this stage of his career. Injuries have slowed his game down considerably.

2) Ott isn’t a top six forward, either. He brings a lot to the table, but his game is better suited for third line minutes.

Let’s look at some advanced statistics for the top six forwards in Dallas last season. 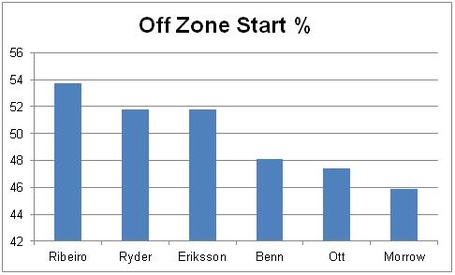 As you can see above, Ribeiro saw the highest percentage of offensive zone starts among Dallas’s top six forwards. To say that Roy is an offensive upgrade on Ribeiro would be a questionable statement (they are comparable offensive talents), but Roy is much better away from the puck and outside of the offensive zone. 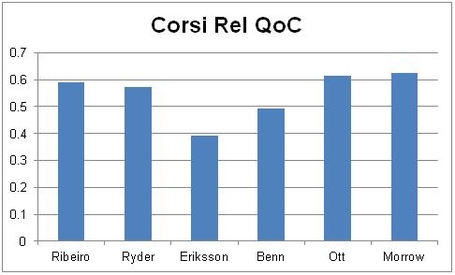 Corsi Rel QoC measures the quality of competition a player faces. The higher the number, the tougher the competition. Dallas wasn’t a great puck possession team last year. All six of their top forwards played against tough competition. The Stars lacked depth and this meant that Glen Gulutzan and his staff found it difficult to create easier minutes for his scoring forwards. That will change in the coming years with a solid crop of young forwards approaching NHL readiness.

In Buffalo, Roy played a two-way role for the Sabres. 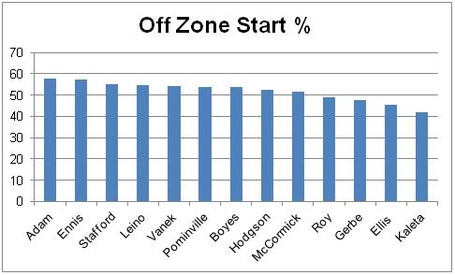 His zone start % of 48 was 10th highest among Sabres forwards – he was obviously trusted to play difficult minutes by the coaching staff. His production wasn’t at the level we have come to expect from him, and injuries are the likely culprit in the decline. Roy will miss the beginning of the 2012-13 season as he recovers from shoulder surgery, but on paper he looks to be a great number two center behind Benn – he will play more of a defensive role than Ribeiro, freeing up Benn to score some more goals.

Whitney played an offensive role for the Coyotes. His 54.2% offensive zone start rate was second highest among all Coyotes forwards (with a minimum of 40 games played), trailing only Raffi Torres. However, the Coyotes didn’t have to hide Whitney from the top opposition. In fact, he faced the third toughest quality of competition after Hanzal and Vrbata. 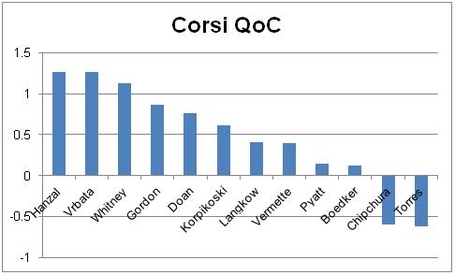 Whitney was signed for many reasons – he is a terrific playmaker, an asset on the power play, a respected veteran, and someone to mentor the likes of Benn, Eriksson and the rookies. However, he is also a very effective two-way forward, even at the age of 40.

In Philadelphia, Jagr played a sheltered offensive role. The Flyers have a much deeper forward group than the Stars do, so that could change a bit in 2012-13. Jagr has never been known for his defensive play (he’s not a bad defensive forward, but it isn’t why the Stars brought him in), and he has lost a step or two in the past few years. He started 59.9% of his shifts in the offensive zone for the Flyers, second only to James van Riemsdyk. He faced the sixth highest quality of competition among Flyer forwards. What Jagr has been known for throughout his career is his elite ability to create and maintain puck possession. This is reflected in his team-leading Corsi Relative number. 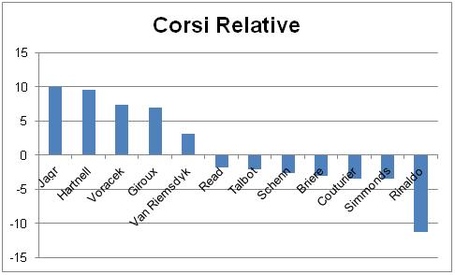 Now that we have a better idea of what Roy, Jagr, and Whitney will bring to the Stars, it is time to figure out where they fit in. Assuming Roy returns 100% from injury, and the season isn’t delayed by a lockout. The Stars could do what many other teams around the league do and create an offensive scoring line and a two-way scoring line. The lines for that could look like:

Before you scroll to the bottom and comment away, let me assure you that I know Ryder isn’t a two-way player. However, Roy and Eriksson are. The Stars could give the prime offensive minutes to Benn and the two veterans, while putting Roy and Eriksson out against the better competition. Or the team could go for more of a balanced attack:

With those lines, both would be given the offensive minutes, but the top line would get the preferred minutes.

Whatever lines Gulutzan decides to ice for 2012-13, one thing is clear – the Stars have significantly upgraded their top six forwards. In Whitney and Jagr, they have brought in two respected veterans who will bring professionalism and work ethic to a team with a lot of youth and inexperience. In Roy, they have brought in a forward who could be a long term piece of the puzzle.

And, perhaps most importantly, they have shaken up a leadership core that struggled in pressure games in March and April for the past few seasons. Tom Gaglardi and Joe Nieuwendyk promised changed, and change has been delivered.