The Numbers Behind the Numbers: The Dallas Stars Bottom Six

Share All sharing options for: The Numbers Behind the Numbers: The Dallas Stars Bottom Six

Editor's Note: We are proud to welcome Jeff Angus to the Defending Big D team, who has covered the NHL and the Vancouver Canucks at a number of locations around the web. Recently, he's been writing about the Stars at his own site -- anguscertified.com. Jeff will be writing a weekly column for Defending Big D and we're excited to have his contributions to the site moving forward. Welcome!

First off, I want to thank Brandon and Brad for welcoming me to Defending Big D. I am going to be contributing my thoughts here on the Stars from time to time. Some of you may be familiar with my work at DobberHockey, the CanucksArmy, or the Hockey Writers.

I follow all 30 NHL teams pretty closely. I grew up a Canucks fan living in Vancouver (don’t hold it against me), but I have been paying particular attention to Dallas over the past year or so. You all know the story – once a great franchise, the Stars fell from graces thanks to unstable ownership. Now that Tom Gaglardi has brought stability back to the organization (I detailed his rise to owner in this piece a few months ago), it is only a matter of time before the Stars once again shine as one of the premier organizations in the NHL.

I hope that my opinions and thoughts will provide a bit of an "outsiders" perspective. I don’t live in Dallas (in fact I have never been, something I hope to rectify at some point during the 2012-13 season), but I watch a lot of hockey.

I was lucky enough to see Jamie Benn when he played for the Kelowna Rockets, and look forward to watching him take the next step to superstardom in the coming years (I profiled Benn as well a few months ago).

I also saw lots of Mark Fistric and Tomas Vincour during their time with the Vancouver Giants. I saw Brendan Dillon develop from a depth defenseman to star almost overnight with the Seattle Thunderbirds. I have interviewed Brendan and profiled him as well. His development in recent years has been nothing short of tremendous. Cody Eakin was one of the better players I saw come through the WHL in recent years, as well.

With all that being said, let’s get to my column today. Advanced stats are being used more and more in hockey circles. I was introduced to them two seasons ago, and have been incorporating them more and more. They are very relevant to all facets of hockey, but like any statistic, context is important.

For the next few weeks, I am going to analyze the Dallas roster with an advanced statistics lens. Today’s piece takes a look at the (potential) bottom six forwards.

Thanks to a lack of depth on lines three and four, Benn faced tough competition last season. In fact, all of Dallas’s top forwards had to play pretty tough minutes. Will that change in 2012-13?

And some combination of these players on the fourth line:

Fiddler is one of the better faceoff men in the league, and the Nystrom-Fiddler-Dvorak line faced the toughest matchups in terms of quality of opposition of any Dallas forwards.

That being said, the trio was absolutely eaten alive at even strength last year. The Stars can’t afford to have their supposed checking line be so thoroughly dominated if they hope to get back to playoff contention. 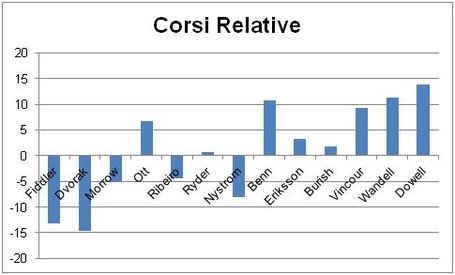 For example, Fiddler’s -13.2 Corsi Relative number means that 13.2 more shots were directed at the Dallas goal compared to the opposing goal per 60 minutes of Fiddler’s ice time.

And from the chart above, you can see that Vincour, Wandell, and Dowell all excelled. The big difference is that those three saw very easy minutes on the fourth line, while Fiddler, Dvorak, and Nystrom were in a more typical checking role. Benn and Ott also excelled at driving play forward. 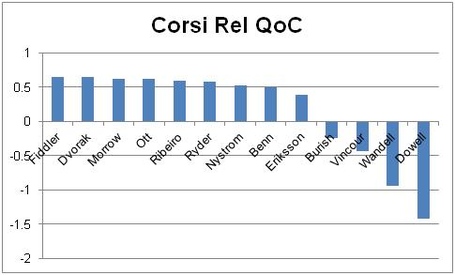 This next number, Corsi Rel QoC, measures the quality of competition a player faces. The higher the number, the tougher the competition. And, unsurprisingly, Fiddler, Dvorak, and Nystrom all played "tough" minutes. In fact, most of the forwards for the Stars played tough minutes.

And, as mentioned above, Vincour, Wandell, and Dowell saw very easy competition.

The final statistic to analyze is offensive zone starts. 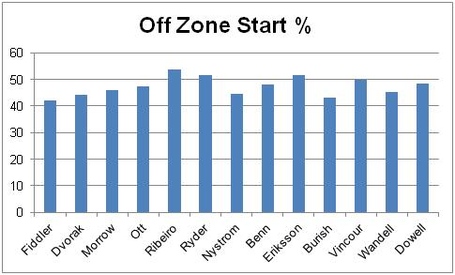 Some teams (Vancouver, Pittsburgh) have defined roles for their scorers and checkers. The Stars didn’t last year, for a few reasons. One – they didn’t have the depth on lines three or four to give the top two lines easier minutes, and two – Ribeiro wasn’t trusted enough defensively, which meant Benn had to pick up a lot of the slack.

If and when Dallas brings in capable checkers, look for Benn and Eriksson to see zone start rates closer to 55%. More offensive zone starts means more chances to score, which in turn leads to an increase in production.

Based on where things stand right now, I’d say these combinations could be seen on opening night (whenever that may be).

Vincour was given pretty easy minutes in 2011-12, but he was able to generate offense consistently. Morrow isn’t a top six forward at this stage of his career, but his leadership and intangibles will be invaluable to the young Stars. Eakin is the wildcard here – he projects as an elite checking center in the NHL, but how close is he to getting there?

He plays like Zach Parise. He isn’t as skilled as the former Devil, but he has an unbelievable work ethic to go along with great instincts and a well-rounded offensive skill set. Gaglardi is a huge fan of the WHL and I’m not surprised the Stars are going to be infused with a lot of WHL guys in coming years – Eakin, Benn, Dillon, Vincour, Fistric, Matt Fraser, and so on.

Eakin played 30 games for Washington last year. He was given relatively easy minutes there (a 51.6% offensive zone start rate and a Corsi Rel QoC of -0.403, the second lowest among all Washington forwards who suited up for at least 30 games). To say Eakin is ready to play a shutdown role would be premature, at best. However, he can’t do any worse in the role than Fiddler did last season.

Fiddler and Nystrom are much better suited for a fourth line role – they will still be able to contribute offensively, but they’ll have less defensive responsibilities.

Wandell is a wildcard here, too. Wandell has shown himself to be a very solid NHL forward at times. Conversely, he has had stretches were he looks completely lost. The Stars didn’t trust him against top competition last year, but he did perform well in a sheltered role (much like Vincour). If Derek Roy’s injury lingers on, or Eakin struggles in a checking role, Wandell is the most likely candidate to fill in.

Each time he has been given an opportunity to play top six minutes, Wandell has failed to run with it. With a one-year, one-way contract in his back pocket, 2012-13 may be his last chance to prove the Stars that he is a part of the rebuild.

Dallas has several young forwards who will see time with the big club – Fraser, Alex Chiasson, and Scott Glennie, among others. The bottom six is anything but set in stone right now, and things could change quite quickly if one of the prospects has a very strong training camp.

The Stars are taking a short term gamble that Eakin is ready. If he isn’t, Fiddler and Wandell will likely compete for the center spot on line three. If Roy returns on time, he will be able to shoulder some of the load defensively – he is superior in his own zone to Ribeiro (likely one reason why the Stars acquired him).

2012-13 will be a transitional year for the Stars. Even if the Stars miss the playoffs again, the right pieces are in place, both off the ice and on, for sustainable improvement. The prospect group is relatively unknown outside of Dallas, but there are all types of players who are pushing for roster spots (scorers, grinders, defensive defensemen, and puck movers).

The bottom six was arguably the biggest weakness in Dallas last season. The Stars simply didn’t have the depth to compete each night, and an overreliance on their top players was a huge reason for their late season collapse. On paper the bottom six looks to be improved (especially if Morrow is able to contribute more than he did last season), but hockey isn’t played on paper.

Is it October yet?