The Origin Of The Mike Modano & San Jose Sharks Rumor

Share All sharing options for: The Origin Of The Mike Modano & San Jose Sharks Rumor

[Update: Reiss has removed the original Tweet and apologized for sending it out. You can see his subsequent Tweets after the jump]

We've had some wonderful examinations of the anatomy of a rumor recently, but Sunday's adventure with Mike Modano and the San Jose Sharks might take the cake.

At around 2:30 central time Sunday afternoon, Scott Reiss of CSN Bay Area Tweeted this out to the masses:

This sent Dallas Stars fans (and for that matter, San Jose Sharks fans) into a tizzy. After all, Modano retired in a very emotional ceremony with the Stars before the start of last season, and his last year with the Detroit Red Wings was plagued with injuries and fading ice time.

Of course, the key in this Tweet is the age - Modano is now 42 and not 40 - the first sign something was amiss. And Modano laid any doubts to rest later when he Tweeted:

But how did this rumor fool Reiss, the host of the Sharks television post-game show? The answer is a combination of a two-year old ESPN Dallas article, a fantasy sports website and a bit of skipping the legwork.

You can see the details of where this bizarre rumor originated after the jump.

As best I can tell, the start of this rumor came from the fantasy-sports website RotoWorld.com.

This screenshot, taken at about 4 p.m. central time, shows the site's NHL home page with the relevant article circled. 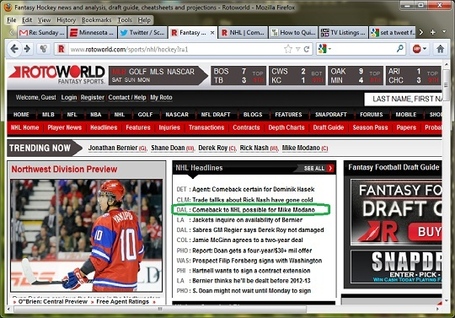 Now that's an interesting headline, isn't it? I wonder what that could possibly mean.

Following the link led you to this page: 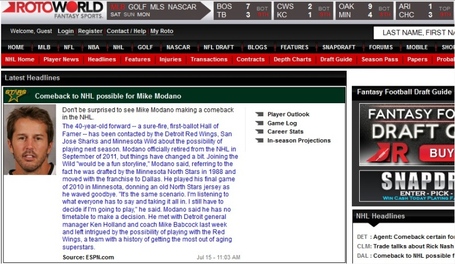 Both references to the story have since been removed.

Now, there are several clues that whoever wrote this blurb missed some critical factors. Again, the age thing should be the first clue. The second is that he was inducted into the U.S. Hockey Hall of Fame less than a week ago (which isn't the Hall of Fame referenced here, but you typically don't get induced into any Hall of Fame before you retire for good).

The third is that there were no stories about this alleged meeting with Mike Babcock and the Detroit Red Wings last week. And fourth and finally, Modano actually played his final games in a Red Wings jersey. I know many of us have tried to block that out, but the fact remains that it did, indeed, happen.

Why are these key facts missing? Because the article linked to this page is an ESPNDallas.com article from 2010. You can read the whole thing right here. The dateline on the article? July 9, 2010.

Now, let's skip the fact that this blurb straight out copy-pasted several paragraphs from the ESPN Dallas article. If whoever wrote that had read down a few more paragraphs, they would have run into this little blurb:

Modano has spent his entire 22-year career with the Stars organization.

Again, anyone with a working knowledge of Modano knows that this is, sadly, not true.

I don't know how the RotoWorld writer got fooled by this article or where the heck he or she dug it up. I do have a hypothesis of how Reiss got fooled. He likely stumbled across this article in his daily internet searches and scanned the first few sentences, then clicked on it to see the original source. Since it was a legitimate ESPN Dallas article, he went ahead and summarized the information at the top and Tweeted it.

I can understand not checking the dateline. After all, why would a website like RotoWorld report on a two-year old article? And I can even understand how he only read the first few paragraphs and didn't make it all the way down to the end where several of the clues that this is not a recent story lie.

But it's an important lesson in checking your sources thoroughly when you go to Tweet or re-Tweet a piece of information. And it's also a lesson in what to do when you come across something like this that just seems wrong - I went straight over to the ESPN Dallas website and found neither hide nor hair of this story, which, combined with the age discrepancy, told me this had to be old information.

I feel for Reiss. None of us are perfect, and I know I've messed up both basic and complicated stories in my own right. But this is a prime example of how you have to be very careful about just scanning articles online. Those little details make a big difference.

As the afternoon wore on, Reiss was apparently alerted to the fact that he was referencing a two-year old article. Here's what he's written this afternoon:

Apologize for earlier @9modano tweet. Story was sent out internally, I relayed it. ‪#sjsharks

@9modano: @Tsudbury FYI seems rotoworld NHL page was the culprit, had the story up for hours earlier. Had Hasek returning too.

For what it's worth, the Hasek thing appears to be legit and pulled from this Detroit Free Press article. I can see, though, how in the context of a 47-year-old goalie attempting a comeback, Modano pondering one was well would seem the more likely of the two.