Chain Of Command, Leadership, Lines Of Communication, And The 2013 Dallas Stars

Share All sharing options for: Chain Of Command, Leadership, Lines Of Communication, And The 2013 Dallas Stars

If bridges aren't maintained they will crumble given enough time. When a garden isn't maintained any number of undesirable events will take place to limit the ability of the planted crops to grow. Infrastructure is obviously necessary to bring about the most efficient results possible from a particular system. The Stars infrastructure deteriorated significantly due to the maddening financial meltdown of Tom Hicks. The Stars have been working to rebuild that infrastructure since the closing of the sale to new owner Tom Gaglardi.

News coming out today suggests the next step could be on the way.

According to Mike Heika, the Dallas Stars are talking to Associate Coach Willie Desjardins about the possibility of taking over the reigns of the Texas Stars for the 2012-13 season. The Texas Stars are in need of a head coach after the firing of first year coach Jeff Pyle. This scenario is one that Brandon brought up a few weeks back.

In isolation this news, while interesting, isn't particularly telling. When taken in context with the rest of the Stars recent efforts to improve their infrastructure a pretty clear picture is presented that suggests the Stars are back on their way to being a successful organization.

As frustrating as the past few seasons of Dallas Stars hockey have been to watch on the ice, the off ice saga has somehow, at times, found ways to be even more frustrating. The bankruptcy nonsense is behind the organization at this point, but an organization doesn't simply walk out of a traumatic period ready to conquer the world. The Stars have had to focus on picking up the pieces of their tattered organization since the closing of the sale.

Leadership begins at the top. If a company takes significant losses over a stretch of several quarters no one is going to go to low level executives for answers. They're going straight to the top with the CEO. In the case of the Stars there was no top level leadership because the lenders in control of the franchise had no interest in running a sports franchise. They (rightfully) wanted to get their money back. Until the hiring of Tony Tavares the lines of communication looked something like this: 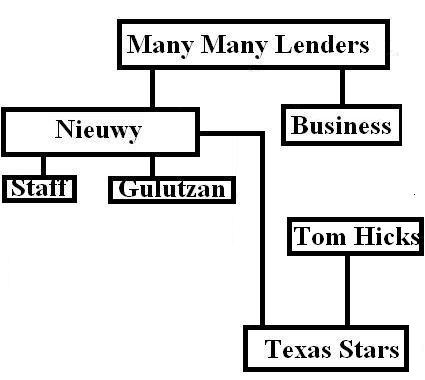 There were too many cooks in the kitchen. There could be slight differences to what the structure looked like, but this looks pretty close.

The problems are numerous. The Stars had weak ownership that demanded only one thing: lose as little money as possible. They had an inexperienced general manager running a franchise with apparently little oversight, and prior to this season they hired an inexperienced coach to lead an inexperienced coaching staff. The Texas Stars hockey operations department suffered too. The franchise was a mess which led the Stars to clean house. The business department was stripped down to the barest of bones, and the Stars startlingly small presence in the metroplex was very noticeable.

None of that is intended to be a criticism of any parties involved except for the lenders, and even if they did read this for some reason they wouldn't care in the least bit. They met their goals. Their goals unfortunately left Tom Gaglardi with a lot to do once he officially took over the team. His first hire was the ultra experienced Jim Lites who first introduced the area at large to hockey almost 20 years ago. One of his initiatives has been to reinvigorate local youth hockey, which is a big part of re-connecting with the area and rebuilding that critical infrastructure.

The hockey operations department is a different animal. Joe Nieuwendyk was in place when Gaglardi took over, and Gaglardi pledged to keep Joe around. There is a certain segment of Stars fandom that would like to see Joe shown the door, and they have legitimate gripes. They can pretty easily point to four (three under his watch) straight playoff misses, the seeming lack of roster development over his time here, and the weird Reilly Smith situation as examples of why he needs to go.

In his time in power here Nieuwendyk has made some shrewd transactions. Michael Ryder paid off well. The Alex Goligoski and Kari Lehtonen trades have worked out well. Joe was able to sign some bargains in the last free agent period to go with Ryder (like Sheldon Souray). He hasn't crippled the franchise long term with crazy long term contracts, and his drafts (overall) have been able to uncover players that should help the Stars soon. The biggest knock against his tenure in my eyes has been a lack of continuity throughout the hockey operations department.

Take Reilly Smith for example once again. He was signed to give the Stars a scoring option late in the season, and Glen Gulutzan barely used him. I won't go into the full situation again (though you can read about it here), but Joe's willingness to passively stand by while Smith was benched, thus burning a year of Smith's ELC, was curious. That situation struck me as one where Joe took a risk, and his direct report (Gulutzan) didn't execute in kind by giving Reilly more of a chance to show what he could do. There was a communication issue there that shouldn't arise.

Gaglardi and the hockey operations department appear to have started taking steps to rectify communication problems such as these with the hiring of Bob Gainey as a special assistant. This is Nieuwendyk's department to run, but allowing him to lean back on Gainey's experiences is invaluable. He has experience that Joe simply doesn't have. It has little to nothing to do with the fact that Gainey has won multiple Stanley Cups. He has experience running functional organizations, and those functional organizations became successful once they established an identity.

Establishing an identity, cleaning up the lines of communications so no one has any question who is in charge, establishing strong leadership, and solidifying the chain of command are goals where Gainey's experience become critical. The discussions with Willie Desjardins are an example of the organization pursuing those goals, and the creativity of the move smells of Gainey's influence to me. From the Heika piece about Desjardins:

he's used to coaching kids and helping them develop, and the Stars are entering a huge era in the development of youngsters in Cedar Park (one reason they fired Jeff Pyle after a disappointing season).....this would give the Stars a chance to hire a more veteran assistant coach to help out Glen Gulutzan and Paul Jerrard.

The consequences of the potential Desjardins move are numerous. Most significant for the NHL product is the ability to hire an experienced NHL coach to add to inexperienced Gulutzan's staff. Names like Randy Cunneyworth, Craig Hartsburg, and Mike Haviland (who Brandon also mentioned) were proposed by Heika. Any of those guys would add quite a bit to the Stars at the NHL level.

The move would also consolidate the Stars' control over the Texas Stars. The problems were rampant in Austin last year. In the few games I was able to watch it was pretty apparent that very little structure was in place. The Stars had few prospects in Austin last year, but that will be changing going forward. For the Stars to reach the heights they hope to reach they need a proper development system in place so the prospects entering the professional development system can thrive.

As an example look at the Detroit Red Wings. They barbeque their prospects the right way: low and slow. Prospects that enter the Red Wings professional structure go to the AHL where they are immediately playing Detroit Red Wings hockey, and they will do so until they are no longer in the organization. It's a major reason the Red Wings are the Red Wings. They have their development infrastructure down. The Stars appear to be moving towards having a cohesive link between the AHL and NHL clubs which will do nothing but help long term.

To make a long story short, the bridges started crumbling during the financial meltdown. The Stars infrastructure got weak due to a lack of experience in the administration of the club. Tom Gaglardi has put people in place to rectify that lack of experience, and if you look you can see the impact they've already had.These changes might not directly impact the on ice product immediately, but you can be sure that the Stars functioning as a cohesive unit will pay off down the road.