We're roughly three months away from the arrival of EA Sports' NHL 13, but news about the improvements to the game has begun percolating out of EA. Most sports video game franchises get an annual roster update and a few new features intended to get consumers to continue purchasing the updated product with the smallest amount of invested capital possible. The NHL series fortunately has placed an emphasis on innovation (despite having no competitors in the market), and NHL 13 appears to be no different.

EA is introducing several new features for NHL 13. Among them are True Performance Skating, EA Sports Hockey IQ, GM Connected, and NHL Moments Live. The first two have been in focus lately thanks in large part to the annual E3 video game conference. After the jump we'll look at what the changes look like in demos, and collectively hope the game actually plays like the changes suggest.

The first development that I remember trickling out of EA was the new True Performance Skating. EA is comparing this change to the introduction of the Skill Stick a few years back which allowed players to control the stick of their selected player with the right thumb stick. Instead of trying to fully describe something I've never personally used I'm going to look to the following description EA circulated in a recent press release:

It sounds like players will have the ability to fully control the speed of their skater. The reveal video from E3 compares the skating mechanics from NHL 12 to NHL 13 at about the 2:30 mark with Steven Stamkos. The speed changes look ridiculous.

If you don't feel like watching the video in full (it's seven minutes long) check out the screenshot below. Steven Stamkos skated from his own goal line to the offensive zone faceoff dot at full speed. The user tried to make a common NHL 12 breakneck turn to the slot. This is what happened. 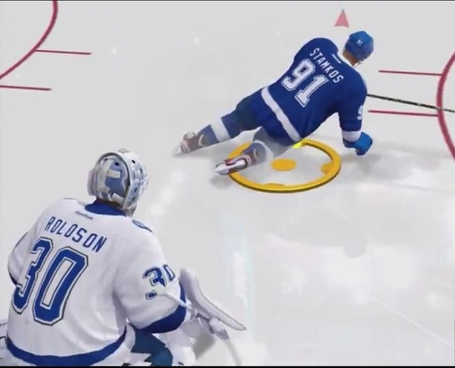 The video showed an interesting scenario that popped into my mind immediately after hearing about the True Performance Skating innovation. The user baited the AI defenseman to come attack him during a glide. When the defender took the bait the user blew by him. Very few online users can play defense as is. These skating changes will undoubtedly increase goal scoring.

Speaking of goal scoring, NHL 13 promises to try to adhere to something resembling hockey strategy. Anyone who has played any NHL series game for any length of time is familiar with how stupidly some AI players can play. They stare at the puck constantly. Playing goalie has been difficult for many for similar reasons. The players in the game had a severe lack of awareness of what was going on around them. For NHL 13 EA promises to focus more on the strategic elements by having players focus on playing their position within a system based on the attack of the opposition.

EA SPORTS Hockey I.Q. – An innovative new A.I. system that governs the behaviors of players, goalies and team systems. In previous NHL games, players were only aware of skaters in their immediate proximity and goalies could only react to the player in control of the puck. With EA SPORTS Hockey I.Q., all players are now fully aware of every other player on the ice, resulting in quicker, smarter and more true-to-life decision-making. EA SPORTS Hockey IQ also delivers the deepest and most customizable set of real-world hockey systems and strategies ever for the franchise.

The E3 reveal video is below:

The video explains the changes in much larger detail, but the goal of the changes was to make the players smarter, and to allow for a wider range of motion for goalies. Users playing as goalies can now actually move all four limbs to make saves. How in the world that works I have no idea, but photographic evidence is below: 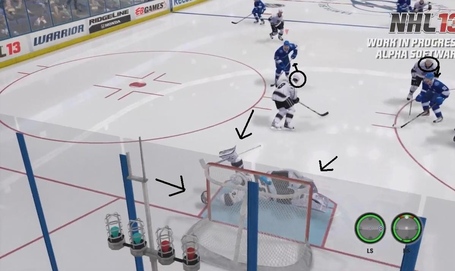 It's a bit difficult to see Jonathan Quick here, but that's him sprawled out in net. Both of his arms are outstretched trying to make a desperation save, and his right leg is in the air. This is an animation you wouldn't be able to see in previous EA entries, and hopefully the goaltending works as well as the video leads us to believe. Another thing that stuck out to me were the players heads. The defensemen aren't both staring at the puck. They're looking squarely at the player they're supposed to defend.

As for the other two features, EA described GM Connected and NHL Moments Live like this:

GM Connected – The ultimate fantasy league with friends. GM Connected takes the franchise’s most popular offline mode, Be a GM, and allows you to play with and against your friends in your own 30-team NHL. Whether you are a hardcore sports gamer or a hockey fan that moonlights as an armchair general manager, the mode offers unrivaled accessibility and depth by allowing players to manage, play or coach on the road to building your team’s legacy. GM’s can also take their experience with them with a mobile companion app, ensuring that they never miss a single moment.*

Every year someone finds issues, glitches, and problems with the new NHL game. Undoubtedly something will come up with NHL 13. It won't be because of a lack of work on the part of the EA programmers though. In the second video they claim to have put in more time on the AI for 2013 than the past three games combined. In a way that blows my mind, but it also doesn't surprise me given how poor the AI has been for a few years. It comes out September 11, 2012, and I look forward to testing this new AI for myself.