Good Morning, Dallas Stars fans. Erin is moving this week and as such it falls to me to edify and entertain today where interesting hockey links are concerned. We start with a quote our friend Mark got down in Cedar Park at the end of the Texas Stars' season from one Mr. Jack Campbell that struck me as interesting.

You know his story well by now. Good American dude, led the U.S.A to glory at the World Junior Championships, taken very high by the Stars, but has been up and down since in Canadian Juniors with two teams. He's developed a bit of a reputation (or perhaps just speculation) as a "big game goalie", or that similarly he is "situationally motivated." His strong performance with a bad Texas team at the AHL level to end last season didn't help to dispel this notion.

"I'll leave it at this: I learned a lot and I've taken a lot from it, more from the mental side of it. I am ready to move on," Campbell said. [ESPN Dallas]

Anyone is going to naturally gear up for a big challenge when it presents itself and be, perhaps, a little more motivated than they'd be otherwise. It could also be that Canadian Junior hockey is somewhat unpredictable and Jack's teams weren't that great in front of him.

Either way, consistency and an "every day" approach will be key to his development into what everyone hopes will be an NHL goaltender. His talent and physical gifts are undeniable. "the mental side of it" is going to be his biggest enemy next season in an 80 game AHL schedule. Read the rest of Mark's entry and quotes from Jack here.

After the jump... Johnny Oduya re-ups with Chicago, Kings fans are trying to get you to root for them, Hockey's Future evaluates Jamie Oleksiak, and Mike Modano is a...really big Spurs fan? Huh? 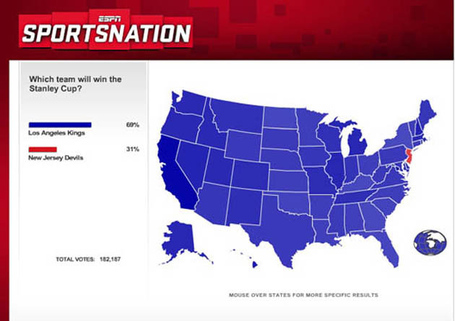