We continue our look back at the Dallas Stars' 2011-2012 season that was today with a shifty glance toward the other half of the special team's equation: The penalty kill. One of this team's biggest problems throughout was that they spent too much time in the box - So much so that there were only three teams in the league that surrendered more power play opportunities than they did (303).

For a team that just missed out on the playoffs again, this would all seem a rather sizeable problem and a good place to point the finger, and yet Paul Jerrard guided his killers to an 82.8% success rate on the year, ranking them in the top half of the league at number 13.

The penalty kill number was fueled by several huge runs. The Stars killed 43 of 45 in a 14 game segment stretching from games 57 to game 70, which coincided with their big push in late February into March. They also killed 34 of 36 in games 20-31, which wasn't a great time for the club but the PK helped keep them afloat. The Stars had a "top 10" kill into mid-March but allowed 10 PPGA in their last 12 games to round out the year at #13.

Call it taking lemons and making lemonade. The underlying problem of spending too much time in the box too often is still there, but they didn't let it become a liability that contributed greatly to the sinking of their season like the power play.

We talked about the Stars power play at length last week and how they're not getting shots to the net and generating chances. ("Digging Deeper Into the Stars' Franchise Worst Power Play")

How does the penalty kill compare to what other teams killers' allowed the Stars to do?

This is saying more about the Stars power play than their penalty killing, but it's worth doing the math to confirm what our eyes told us for 82 games.

Who were the Stars best penalty killers?

Josh already did this by the numbers here: "Stars Final Scoring Chances: Special Teams Edition" so I won't re-post the whole table. It tells us much of what we see in analyzing other areas of the Stars' game: Benn and Eriksson are the Stars' best forwards at everything. Fiddler and Dvorak were a bit over-exposed here too, being used the most, and usually first against team's better PP units.

It's often said by fans that the Stars have a bad (penalty kill, power play, what have you...) because they seem to lose a few too many faceoffs. Here are the Stars' big faceoff guys on the kill this year and how they fared:

Winning faceoffs shorthanded is notoriously more difficult to do owing to the fact that you have fewer teammates to help you battle for a puck than the opposition does. Many of the faceoff leaders in the league have sub-.500 shorthanded percentages.

Gulutzan used Fiddler as his go-to guy, or at least as the one to open a kill more often than anyone else, but only got 48% out of him. Fiddler was sold as a faceoff specialist (by me, yes) and we didn't see that as much as would have liked. Perhaps what Gulutzan really needs is a faceoff horse like Dave Tippett has in Phoenix.

Indeed, when the Coyotes took a penalty this year you could be sure that Boyd Gordon would be out there to win that draw and start the kill off right. He took 283(!) short handed faceoffs this year and won 163 of them (57.6%). A nice trick if you have the personnel to pull it off. Of course faceoffs aren't the end-all, be-all of killing a penalty. Look at the number-one kill in the land: New Jersey. Patrik Elias handled their heavy lifting on the kill with 170 draws... He won a putrid 35% of them. Poor faceoff performances can indeed be overcome.

Josh observed during the penalty kill's better runs this year that the Stars were getting above average goaltending and that the numbers were probably due for a little regression. That may have been the case toward the end of the season but Dallas still receieved above average netminding in short handed situations this year.

*There was a power play goal against scored with an empty net this season that's not reflected in these totals.

Derek and the Copper and Blue wrote recently that the average short handed save percentage this year was .8686, so it appears that the Stars' killers did get a little help from their goaltenders. Kari Lehtonen was well above average, in particular, nearly pushing his shorthanded percentage into the .900's. "Your goaltender has to be your best penalty killer." It seems that on many ocassions that they were, indeed.

A good kill doesn't look very demonstrative in screen grabs, I'm afraid, because during a good kill the puck isn't in the Stars' zone much. It's not about what the Stars do once they're in "the box," one finds when looking at many of these. It's what they do to make sure they don't have to get into the box in the first place.

This one has a little bit of everything. 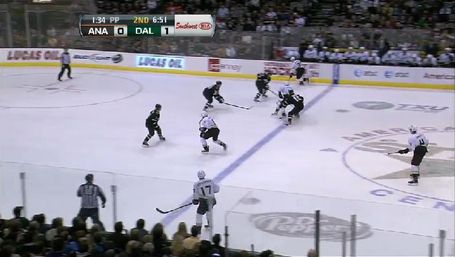 We pick this PK up 26 seconds in, because that's the first time it gets interesting. The initial faceoff was lost by Burish but he blocks a shot and clears it immediately. When the Ducks try to enter with 1:34 remaining, the Stars have put up a gauntlet at the blue line, and they're not backing off. 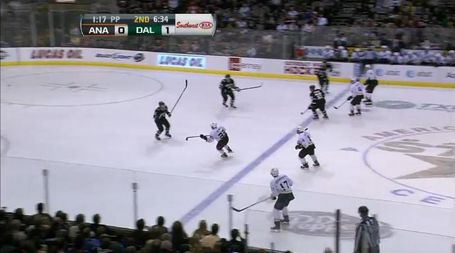 Fiddler won the ensuing faceoff and sent Anaheim back 200 feet. When they enter again on the right side with 1:17 remaining the Stars are there at the blue line with pressure again. They don't force the offsides this time but Anaheim must dump the puck and retrieve. 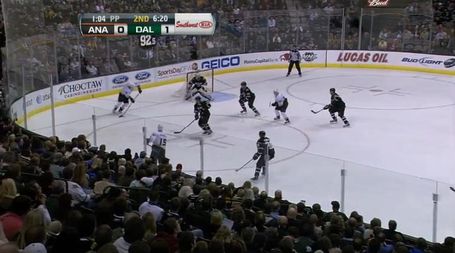 By the time they collect the puck again the Stars are set up well in their box. Robidas is leaving a lane for Selanne (with the puck) to get to Lehtonen but he tries for his man in the slot instead. The Stars are able to turn the puck over and send them back the other way. 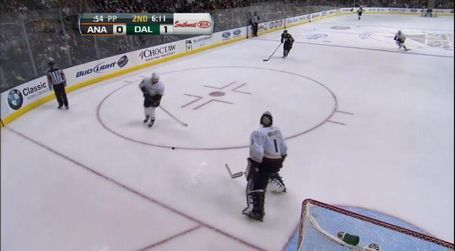 They go 200 feet again. Ribeiro, Fiddler, Goligoski and Daley come on the ice for Dallas. Tic-tock. 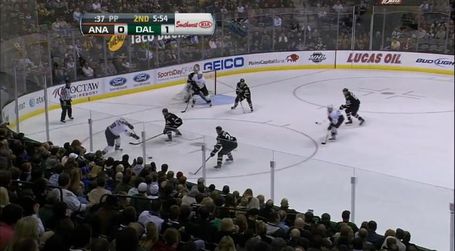 20 seconds later they're set up in the zone again and Mike Ribeiro is too far behind a wide open Koivu in the slot. The Stars are caught with their pants down a little here, but Goligoski, set up in front of Lehtonen, blocks the Koivu shot .

Nystrom clears the puck with a good heads up play. The Ducks would dump the puck in and lose a battle, and the Stars advanced the puck slowly to kill the remaining ticks of the clock. It's so boring, it's hardly worth showing you. That's what good penalty killing should be, though. Uneventful.

Face off wins. Good presence at the blue line. Shot blocking. Minimize the opponents zone time. Clear rebounds. The Stars did get caught for one good chance in the slot here but executed well enough in all other areas to make up for it. This is the kind of nice, boring penalty kill we like.

What can they do better?

One thing the Stars can do is find Jamie Benn more SH ice time. We say this about every facet of his game, and we seem to have no problem writing checks that Benn's body must cash over the long haul of 82 games (sorry, buddy), but it's worth saying again here if all the numbers are telling us anything. Benn played 18:04 per game this year. Elite forwards in this league can push their totals to 20 minutes or even upwards of 22. (24 if you're Ilya Kovalchuk). Another 45 seconds of penalty kill time here or there, combined with another 45 seconds of power play time shouldn't kill him as he continues to mature and grow into his full potential. He's shown himself to be extraordinarily valuable in all areas. It's up to Gulutzan to maximize his potential and deftly allocate his usefulness where it's needed.

Another way to go is to acquire some kind of defensive specialist forward on the free agent market - Something that is very high on DBD's off-season wish list. This person, whoever he is, would be a third line winger that can help Vernon Fiddler's line into a true checking line capable of taking on very difficult minutes, freeing Jamie Benn for other, more fruitful pursuits. This person would then, naturally, be a big part of the penalty kill as well. As May becomes June and free agency gets a little closer I am sure we'll look at some potential candidates.

While we're sure that Robidas, Goligoski, Daley and Larsen will be here next season, it remains to be seen who will join them. Adam Pardy is under contract but is not a penalty killer in anything resembling an ideal situation. The defense will change, and so too will the PK. Nicklas Grossmann was a huge part of this unit and though Mark Fistric tried to replace his minutes, the scoring chance numbers say it just wasn't the same.

Of course, the best way to improve the penalty killing is just stop killing penalties so much. At 82.8% and 13th place in the NHL, we must say that the Stars' penalty kill was better than average. We give credit to the players and Paul Jerrard for, once being placed in that situation, coming out of it better than 17 other teams did as a percentage of short handed segments. Hockey is a bottom line business, however, and the cold hard truth is that the Stars surrendered 52 power play goals this year. Only seven teams gave up more.

Dallas spent 80 more minutes (80:37) on the penalty kill than on the power play. That's second to last in the NHL to Colorado, who was shorthanded 114 minutes more than they were on the man advantage. Only 6 of 14 teams that had a negative special teams minute differential made the playoffs, and they were teams like St. Louis, Los Angeles, Boston and Washington, who have strengths in other areas that allowed them to overcome it. The Stars, as currently constructed, do not. They must minimize their liabilities next season and give themselves more time at even strength, if not the power play.