A few weeks back we discussed how much of the trouble with the Stars power play was the absurdly low amount of shots actually put on net. The chants from the home crowd of "shoot!" while the Stars were on the power play were frustrating because, while the calls might have been warranted, the Stars showed last season that just because they need to shoot more doesn't mean they should shoot all the time.

I went back and watched a number of the top power plays in the NHL and it was obvious where the Stars were lacking: player movement while on the power play. Teams like the Sharks, Predators and Penguins all had players moving aggressively around the ice while on the power play, and all three employed incredibly successful power play units. If Player A had the puck, then Players B, C, and D were moving in a constant rotation -- always looking to create space and open up a shooting lane.

In fact, most times the player with the puck wasn't standing still at all and was moving with the puck just as much. The puck itself was also constantly on the move, with quick decisions being made by everyone on the ice with where and how they wanted to move it. Players rarely held onto the puck long enough to allow the PK box to move and adjust and more than anything, the puck was moved extremely accurately and extremely quickly. No slow saucer passes to be found.

After the jump, a look at what didn't work for the Dallas Stars power play.

Let's move on to a breakdown of what went wrong. I used a single power play, against the Anaheim Ducks, to highlight several issues that plagued the Stars nearly every time the team had the man advantage. These issues carried over from game to game and from power play to power play, a big part of the reason for the never ending frustration with these struggles. 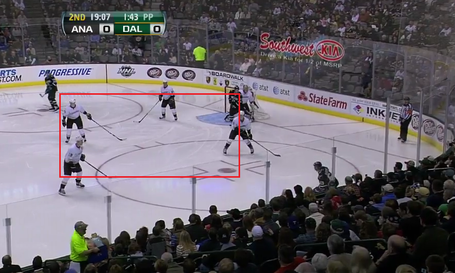 Here, Ribeiro is once again set up on the half-wall with the Eriksson low and Ryder in the far circle. The Ducks have a relatively tight PK box and the Stars are, once again, set up around it. It's tough to show "lack of movement" using still shots, but Ribeiro is basically the only player moving right now -- and he's not doing much of it. He has the puck and slowly moves towards the box, but nothing is forcing the Ducks to break ranks; the rest of the power play unit is effectively standing still as well, there's no rotation and Ryder is slowly circling as he waits for the puck. 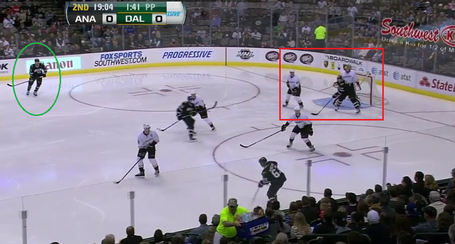 Here, Ribeiro spots Ryder and decides to pass the puck over. Eriksson is set up in front but Jonas Hiller has no trouble seeing this play develop. Goligoski has now moved down into the box, something the Stars attempting an incredible amount of times this past season: move a defenseman low and look for the high tip. Ribeiro uses the open space to send a slow saucer pass across the ice. 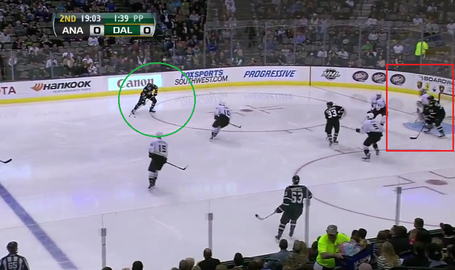 The slow pass allows the defense (and more importantly, Hiller) to adjust. Ryder is forced to receive the pass and reset for a long wrist shot, with Eriksson still on the crease but nowhere near in position to screen Hiller. It's an absurdly easy save from distance for the netminder. 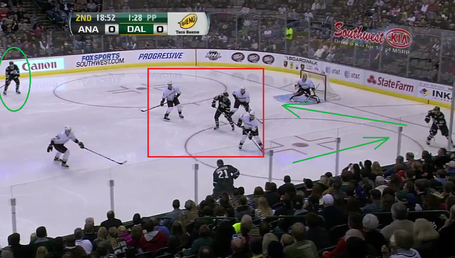 Just a few seconds later and the Stars are set up again. Goligoski is still working the high slot (because, obviously, that's where his strength is) and this time Eriksson has the puck on the half wall. The Stars actually have the Ducks somewhat out of position here and not a single player in paying attention to Ryder.

Let's take a moment. Study the screenshot above. I've used green arrows to show how this play is supposed to go. Eriksson should quickly move the puck to Ribeiro down low, who then should instantly fire the puck across the crease. None of the Ducks are in position to defend either pass and no one is in position to cover Ryder. At the same time, Ryder should be streaking down low, using the open ice to his advantage, for what should be a tap-in power play goal. 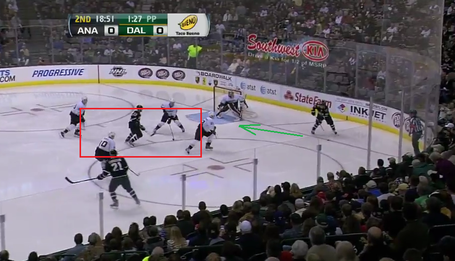 Eriksson makes the pass but Ribeiro hesitates with the puck. Ryder is nowhere to be seen because he's still in that high circle area -- where it's obvious he spends most of his time on the power play. Before we start bashing Ryder, I genuinely believe this is the system the Stars were attempting to work with: fire pucks from the perimeter and attempt to get a shot through, around the PK box. Yet we can see how this hasn't worked: Goligoski is covered in the high slot and the actual open passing lane is useless because there's no one there. 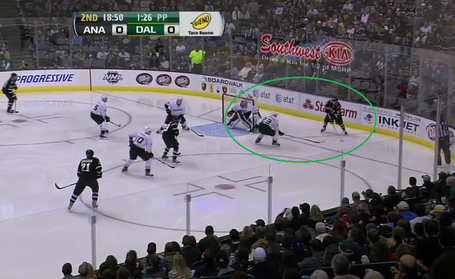 Ribeiro is forced to back off and delay his pass and is now challenged by a Ducks defender. His pass is deflected and is well off the mark; no shot goes on net. 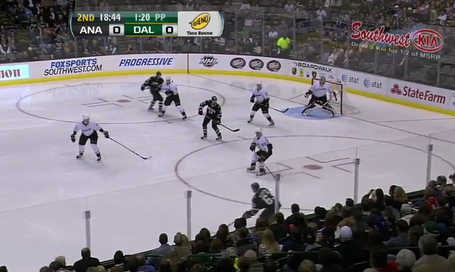 Just a few moments later and Ribeiro has the puck on the half-wall again. Eriksson and Goligoski are fighting for position in the high slot area and the Ducks are once again in their PK box: there is now six players crowding the area directly in front of Hiller. There's is absolutely zero rotation, for the Stars, however, and Ribeiro has nowhere to go but to the point. 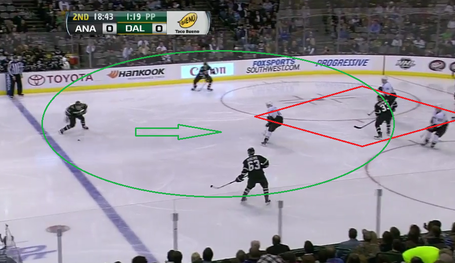 Robidas fires the puck off the pass from Ribeiro. As you can see here, there is almost zero room for this shot to make it through to the net with the Ducks collapsing into a tight triangle in the slot with Goligoski likely attempting to get a tip. The shot, of course, never gets through.

The Stars would complete this power play without a shot on goal, a feat that happened all too often this season. Ironically, Brenden Morrow would score on the power just a few minutes later...off a brilliant feed in transition from an aggressive play by Jamie Benn.

There's a lot of talk about "power play quarterbacks" and how the Stars need one -- someone to effectively "run" the power play like we think players like Brad Richards and before him, Sergei Zubov, were able to do. In truth, it's not about one player fixing the power player it's about a complete change in approach and mentality when it comes to the power play itself.

The last few frames above highlight how much this change is needed. Obviously, looking at it on film and from high is easy compared to actually accomplishing this on the ice, but Robidas should have quickly moved the Ribeiro pass across to Ryder who then could have aggressively taken the puck toward the net or moved the puck right back across to Ribeiro. Instead, another shot fired into a mass of humanity after a minimal amount of actual puck movement.

The Stars need to accomplish three things next season to turn this around: move the puck quickly and decisively, rotate players without the puck to open up the defense and actually put the puck on net and not into the shin pads of players standing directly in front of them.

A lot of this is about instinct and natural ability but we've seen these players make brilliant plays with the puck. For some reason, when it came to the power play, the natural instincts departed and the players began to think too much. This leads to hesitation and indecision; the Stars must find a way to move the puck around the ice without the need to hold onto the puck for too long.

Changing it over the course of one summer will not be easy. Playing Jamie Benn on the power play more is certainly a start. The Stars attempted a complete change to the approach at the end of the season -- led by Benn -- but it was far too late for anything to change.