The Dallas Stars, in partnership with the Pro Players Foundation, helped build a playground at Dallas LIFE shelter this Saturday. The foundation awarded a $25,000 grant to help build the new space for kids, and several foundation staff members and Dallas Stars players were there to lend a helping hand in putting the playground together.

The looks on the children's faces when they saw their new playground was priceless. There is a swing set, a basketball court with an adjustable basketball rim, astroturf to play on, and a big multi-purpose play set (including tunnels, slides, and all sorts of fun things for the kids) with soft mulch to reduce the number of skinned knees!

More on the new playground and much more about Dallas LIFE after the jump!! 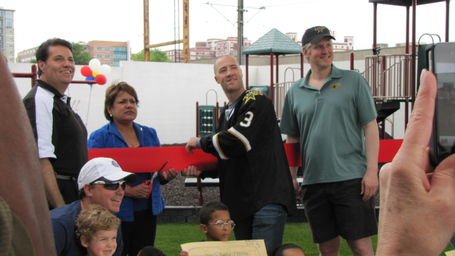 This is the fourth year that the Dallas Stars have partnered up with Dallas LIFE, the largest homeless shelter in the Dallas area. Dallas LIFE is not just a homeless shelter, however. They have a very successful rehabilitation program that allows men and women to relaunch into society with the skills necessary to be productive members of society. The 10 month long New Life program offers classes in such areas as anger management and computer skills, mens and womens issues, budgeting, and resume writing in order to teach them job skills. The program requires commitment, and is very stringent. Everyone works around the shelter, doing different jobs while they are there. They are not allowed to leave the grounds the first 30 days of the program, and have limited time away after that. As they progress through the different stages, they receive more and more priveleges. 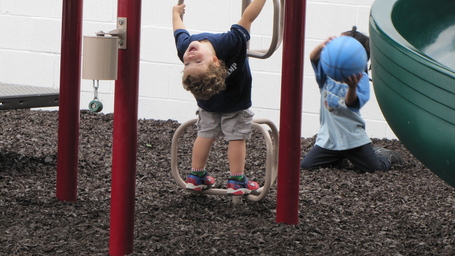 Dallas LIFE takes not only men and women, but families, married couples, special needs, single parent families, and the elderly, and is one of the few shelters in the area that caters to such diversified needs in one place. Bob Sweeney, the executive director of Dallas LIFE, took everyone on a tour of the facilities and grounds. He emphasized that Dallas LIFE is not just "3 hots and a cot", but a program that shows real success in its graduates. Most shelters see a 2-3% success rate, where people never need assistance again after leaving. Dallas LIFE's success rate is over 20%!

To learn more about this great charity, or to find ways you can help, please visit www.dallaslife.org.