Share All sharing options for: 2012 NHL Playoffs: Dallas Stars Fans Should Not Lament Success Of Dave Tippett and Mike Smith 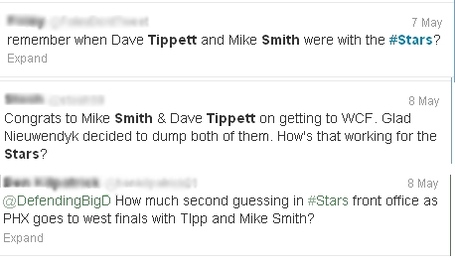 Dave Tippett, Mike Smith, and the bankrupt Phoenix Coyotes continue their unlikely run to the Western Conference Finals this week when they square off with Jon Quick and the Los Angeles Kings, and with each step they take toward Lord Stanley's Cup in a weird post-season, certain groups of Stars fans grow more and more displeased.

The above is just a very small sampling taken from a wide Twitter-verse full of lamentation and regret where these two ex-Stars are concerned. It's only natural. Controllable assets moved deliberately that find success elsewhere usually engender some kind of spite, anger, or jealousy when held up against perceived sub-par replacements and/or trade return.

As much of a third of any NHL roster is often comprised of players and coaches who have spent significant time elsewhere. The Coyotes elicit a particularly sharp response this post-season, however, where Stars fans are concerned because their perceived strengths are coaching and goal-tending, and the two men spearheading those efforts both called Dallas home for a time in the mid-to-late 2000's.

The story of why Dave Tippett was relieved of his duties with the Dallas Stars is a more complicated one than many remember. That's often the case in sports, or in life. We're guilty of it here too sometimes, I am sure. The further away we get from a series of events the more we tend to over-simplify it as it gets smaller in the rear-view mirror. Revisionist history sets in, even.

We've talked about this before. We'll talk about it again. As the Coyotes enter their first Conference Final, let's explore that most popular of questions. "Why did the Stars fire Dave Tippett again?"

The Mike Smith comments are just plain... well, sports fans are emotional. Give the man his due this season. He has been extraordinary. Lamenting his departure from this franchise, however, is borderline moronic. He languished with the Tampa Bay Lightning for years, was unable to keep his starting job, and put up some pretty poor numbers.

Brad Richards was an elite force here that kept the Stars competitive and performed like a stud in the 2008 playoff run. Little more need be said. If the assertion is that the Stars should have known in February 2008 that Mike Smith's spring of 2012 was going to be legendary and held on to him until then, then there's very little response or discourse that can be offered.

Not to mention the simple fact that Joe Nieuwendyk was not the one that made the Mike Smith trade.

In June of 2009 the ax was delivered swiftly to a man that had known nothing but (relative) success here, it's true. The bigger picture was that Tippett had been given significantly talented, well-paid rosters and had been repeatedly ousted in the first round (Colorado, Colorado, Vancouver) as well as a second round exit as a Number 1 seed in 2003. The roster was aging and there were rumors that a bit of a country-club atmosphere had started to take hold. Perhaps his message was not being heard.

Dallas was a model of consistency and stability in the hockey world for many years leading up to what was a significant amount of upheaval in 2009, but sometimes in sports stability leads to complacency. We might revise history and say that the Stars never should have gotten rid of Dave Tippett, because "Look at what he's done in Phoenix!" but it wouldn't have been the same here.

Mike Modano was declining. Marty Turco, though we didn't realize the full scope of it at the time, was sharply declining. Sergei Zubov was done. The defense was still going to be sorely lacking. The financial crumble of the Hicks Sports Group empire had already begun. (He had already missed his first big interest payment in March of that year). The budget was already contracting.

Dave Tippett, had he stayed another year or even two years, would have been subject to the same struggles, tribulations, and decline. Plus he would have been doing so starting with a group (reportedly) already weary of his message and methods. That is to say that he would have been gone either way, sooner or later. He wouldn't have been here today, in 2012, leading the Stars to the Western Conference Finals.

Dave Tippett, from his point of view, might have even gotten out just in time. You might even argue that his last minute placement with the Coyotes before the 2009-2010 season forced him, for the better as it turns out, to adjust his philosophies and techniques rather extremely to the conservative (yes, even more so than with Dallas), making him the coach he is today.

None of that matters, however. The decision to end the two-headed GM experiment and bring in Joe Nieuwendyk as their replacement was the one that sealed Dave Tippett's fate.

GM Joe said from day one that he admired the puck-possession style games of the Red Wings, Blackhawks and Penguins. He seemingly wanted to change the club's mind set moving forward. The hiring of Marc Crawford confirmed this. It follows logically that he told Tom Hicks and Jeff Cogen these kinds of things when he was being interviewed, long before anyone let Tippett go. They (Hicks and co.) knew that when they hired him. It was their decision to bring Joe in that saw Dave Tippett gone.

Getting mad at Joe Nieuwendyk for changing coaches when he arrived is like getting mad at the new Chemistry teacher for putting up a periodic table in a class room that used to belong to an English teacher.

He was just doing what he was brought in to do.

These positions, philosophies, plans, goals, etc. of Joe Nieuwendyk's seem to have evolved over the last several years as the many realities of Hicks-induced change became known, but don't ignore the many circumstnaces and truths of June 2009 while angrily watching Dave Tippett's cold, lonely upper lip on NBC Sports Network this weekend.

Tippett earned 53 wins with the Stars the year after the lockout, followed by 50, 45, and a non-playoff berth. With Phoenix he's earned 50, 32, and 42, and like his years with the Stars, finds himself in the WCF as the regular season numbers decline. If the parallels continue and Phoenix misses the playoffs next year, what then will the conclusions be?

Don't say the Stars were wrong for getting rid of Tippett, but do admire what he's done in Phoenix. Covet the way his team plays together, as one, with a clear identity. Recognize the roster construction, concieved with a singular goal in mind: Keep the puck out of the net. Be cognizent of how extraordinarily rare and unlikely the success of that franchise has been as it too has floundered in ownership woes.

Root for him if you want to, be bitter about if it you like. Just don't say that the Stars should have kept Dave Tippett. It's a little more complicated than that. If you really, really have to point the finger at someone, move it away from Joe Nieuwendyk and start looking at who was really calling the shots that summer.