The 2011-12 Dallas Stars was a team of extreme highs and extreme lows. While the Stars, once again, just barely missed out on the playoffs it's impossible to not look back on the season as a whole and try to determine where it all went wrong. The losing streak at the end of the season and the inability to pull out of the tailspin certainly didn't help, but along the way the Stars suffered through incredibly inconsistent play outside of the two magical winning streaks.

One reason for the team's struggles, and some might argue the biggest reason, was the NHL-worst power play that essentially doomed the Stars in nearly every game. It was amazing to see; how a team playing with aggression and confidence would suddenly lose both of these aspects when they played with a man advantage was baffling. As the season progressed it was apparent this was more than just a coaching issue -- they changed the setup and approach several times -- this was also about confidence and how with each failed power play, the players on the ice would lose more and more of it and start thinking entirely too hard about what they were trying to do.

When you look at the most successful power plays in the NHL this past season there are two traits that stand out. For one, teams like San Jose and Pittsburgh would overwhelm the penalty killers with aggression towards the net -- a non-stop barrage of shots and players. The other is that teams utilized puck movement, and lots of it, in order to open up the defenses and get the goaltender moving. The Dallas Stars power play could not accomplish either of these actions over the course of the season and this, more than any other reason, is why the power play failed.

We've covered just how historically bad the Stars power play was this past season, but I wanted to dig into why it was bad and what can be changed moving forward. After the jump, a detailed breakdown of what worked for the power play this season. We'll take a look at didn't work in part two, tomorrow.

When the Dallas Stars power play was at its best and actually effective at scoring goals, it was because the team was playing to its ultimate strength: aggressive offense in transition. The Stars, most of the time, would attempt to slow the play down and ease into the offensive zone to set up the power play. Yet the Stars scored multiple goals by playing aggressively and moving the puck quickly up ice, taking advantage of the opposition being shorthanded a player.

What's amazing is that when the Stars did this, they accomplished the main goal of the power play: open up the penalty killing box, get them moving and get the goaltender moving. Let's take a look at a few goals where this worked: 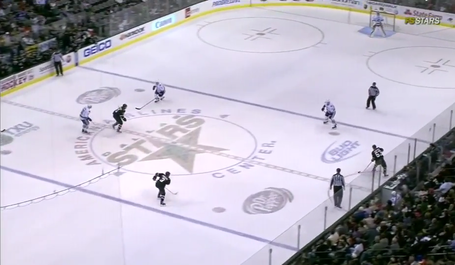 Here, against the Vancouver Canucks, the Stars have just given up a shorthanded chance. Loui Eriksson quickly moves the puck up the ice in transition to the right wing to Ribeiro. The Stars have the advantage here, with Ribeiro drawing the attention of two defensemen and the trailing forward focused on Eriksson and Robidas. 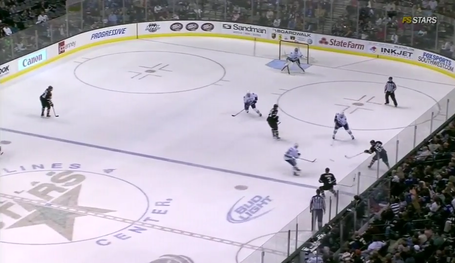 As Ribeiro carries the puck across the blue line, the defense converges on the three players along the boards. The Canucks still have one man trapped deep so the Stars are able to take advantage of the open space, with Michael Ryder trailing the play and converging on a wide open area of the ice. 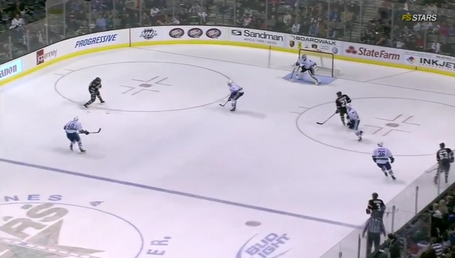 Ribeiro hits Ryder with a brilliant cross-ice pass that he one-times past Roberto Luongo. This movement of the puck and quick decision-making never allowed the defense time to set up and got the goalie moving laterally - exactly what the Stars want to do. What's interesting is that, despite the open ice, Ryder wasn't charging hard at the net -- electing instead to glide into the zone he normally inhabits on the power play. Keep that in mind for later. 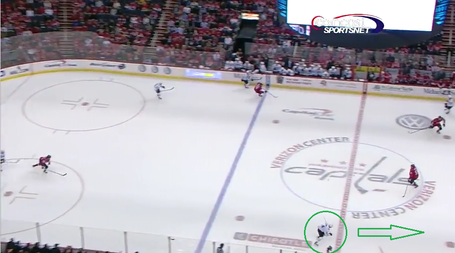 One thing the Stars needed more of this year on the power play was Jamie Benn, and here's why. Another example of Eriksson making an aggressive play in transition and hitting Benn who is streaking up the right wing. He has the Capitals defensemen a bit flat footed and carries the puck easily into the zone. 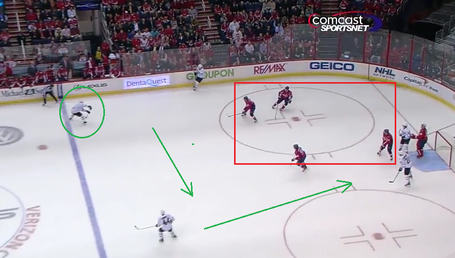 Jamie Benn deked a shot and then quickly carried the puck around the net and back to the left wing half-wall before handing it off to Trevor Daley at the point. Benn's decision to carry the puck around the net allowed the Capitals to set up their PK box, but the Stars compensate with quick puck movement. Benn never hesitates to the move the puck to Daley (circled) and as you can see, Sheldon Souray is moving to the outside of the box to open up a shooting lane. The Stars also have two players set up in front of the net -- something else to remember for later. 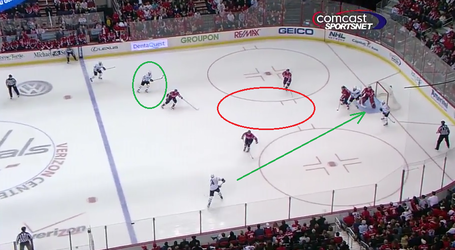 Here, Souray fires the puck on net. Neuvirth was able to move laterally and get somewhat squared to the shot, but the important thing here is that Souray was able to actually get the puck on net. The other important thing to note is how the quick movement of the puck has pulled the penalty killers out of their box and out of position somewhat -- we now have the defense chasing and watching the puck. Jamie Benn (circled) is unnoticed and has a clear lane to the net. 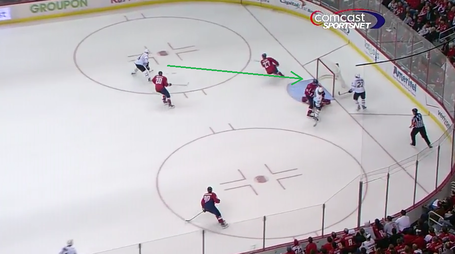 The rebound off Souray's shot goes right to the previously open circle of ice and Benn fires a laser into the wide-open net. Notice how, just as Benn is releasing the shot, Neuvirth has yet to react and two of the defensemen have their backs turned to the play. It was a lucky rebound but also a great example of how moving the puck aggressively and quickly resulted in a big goal. 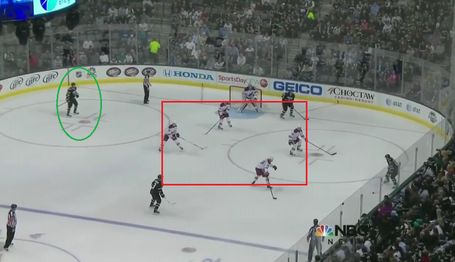 One final example of what went right.

Here, the Stars are actually set up in the zone with Ribeiro along the half-wall with the puck. This was the set the Stars would run 90% of the time with the Ribeiro power play unit, with Eriksson low and Ryder prowling in the left circle. The Coyotes are set in their box and the Stars are attempting to find a way to get a shot through. Eriksson breaks off and opens up a bit for the pass and Ryder sneaks in low. 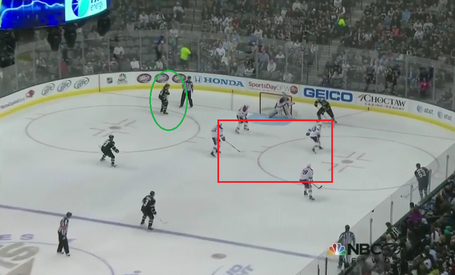 Here, the Stars were able to move the puck around the box instead of trying to go through it. Eriksson takes the pass from Ribeiro and quickly (quickly!!) passes across the crease to a wide open Ryder. Before we move on, take note of how the Stars are set up around the PK box -- almost as if they're trying to work the puck around the perimeter instead of getting it moving and opening up. It's a strategy that almost never worked and something we're going to dive headfirst into now.

Tomorrow...we'll take a look at what really matters: Why the Power Play didn't work.