Share All sharing options for: The Eyebrow Raising Saga Of Reilly Smith

*Since the writing of this the Stars have been eliminated from postseason play.

A few weeks ago the Dallas Stars caused a buzz by signing highly touted prospect Reilly Smith to an Entry Level Contract. It's the time of year, after most college seasons have ended, when NHL clubs sign prospects from the NCAA that will be making the full time jump to professional hockey with amateur tryout contracts which contain a formal contract beginning the next season. In some cases the big club will bring the prospect directly to the NHL with the expectation that the player can contribute immediately.

The Stars front office felt strongly enough about Smith to sign him to an entry level contract. Since the signing the Stars have fawned over Smith and the offensive potential he brings. They brought him in because they felt he could make an immediate impact offensively, but since the signing he has barely had the opportunity to get on the ice. The situation is very strange, and from the outside appears dysfunctional to a degree. The Stars have burned through a year of Reilly Smith's entry level contract for no real reason.

The situation offers a glimpse into how the Stars organization works, and that glimpse also raises some red flags.

I was excited when the Stars signed Reilly. The Stars have some holes in the top six. A player with the skill set the Stars organization feels Smith will develop is a very nice fit. The more conservative play would have been to sign Alex Chiasson to the NHL roster because he already has an NHL foundation (size, possession skills, positional flexibility, physical game, etc.) to go with some offensive upside. The Stars decided to go for the pure goal scorer with the quick shot.

He wasn't put in position to succeed though, and so far in his incredibly brief career he hasn't. In his debut game against the second worst team in the NHL (Edmonton) he only got on the ice for four minutes. In his second game he was bumped up to eight minutes. He hasn't played sense, and I'd be stunned if he plays again as long as the Stars have a chance of making the playoffs. This paragraph buried at the bottom of a morning skate update from Mike Heika drives the point home:

Many of you are asking about why Smith would be a healthy scratch when the Stars made such a big deal bringing him in straight out of college. I believe Joe Nieuwendyk really believes that Smith can help the roster right now. However, he is not going to tell Gulutzan how to coach. As such, Smith ends up in no man's land. Bottom line, he is an inexperienced kid who could make a mistake at the wrong time in a game where every mistake is magnified. As such, the coach is going to trust players with a little more experience.

Nieuwendyk appropriately stays out of meddling with lineups. Mandating who does or doesn't play would be micromanaging, and it's encouraging to see that Joe, despite being a Hall of Fame ex-NHLer, stays out of Gulutzan's office. However, if he wasn't going to mandate that Reilly needs to play then the previous "breaking in" periods for Stars young players should have served as a warning that Reilly wasn't going to get much ice time. Gulutzan coached both Tomas Vincour and Philip Larsen in the AHL last year. When Larsen was initially recalled he sat in the press box for several games waiting to play despite a history with Gulutzan. Vincour, likewise, struggled to get ice time for a long time despite being one of the Stars top possession forwards.

Smith also has the disadvantage of trying to get up to speed with an NHL club that has missed the playoffs for three straight years, who are in the thick of a playoff race, while having no background with the coach, system, teammates, or his new living arrangement. The Stars started him out on the fourth line in both of his games. He skated with Jamie Benn some in the second. He never saw any powerplay time. For a player signed because of his offensive ability, Smith hasn't been given the opportunity to show it very much.

The reason he is now a healthy scratch isn't because of a lack of offensive ability. It's because he doesn't know what he's supposed to be doing defensively which was very predictable given the scenario I just laid out. The last time Smith skated for the Stars the NHL credited him as -3 against the Canucks in his second game. I went back to watch the goals for which he gained minuses. One of the goals was erroneously credited to him, Steve Ott, and Jamie Benn instead of Vernon Fiddler, Adam Burish, and Ryan Garbutt. On the other two Smith made blatant errors. On one of the goals his mistake didn't cause the goal. But, observe this screen capture from Andrew Alberts' goal to put the Canucks up 3-1. 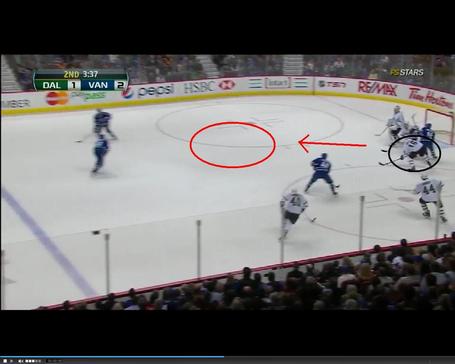 Reilly Smith is in the black circle. The red circle is where he should be when playing a zone. He's supposed to be applying pressure to the point, and/or blocking the passing lane to the point. Instead, off of transition, he is caught so deep defensively that both Canucks at the point could walk in 20 feet before being attacked if they wanted to. He clearly doesn't understand his responsibilities right now, and it's hard to blame him. He's been around professional hockey for two weeks now. With errors like this, given Gulutzan's tendency to favor veterans, I would be stunned if we see Smith again without an injury to someone else or the Stars being eliminated from the playoffs before they take the ice against the Blues to end the season.

The Stars have essentially sacrificed one year on Reilly Smith's entry level contract for very little tangible benefit. He needs to play to develop, and if they had signed him to an ATO like they did with Chiasson and Austin Smith he would have been playing in the AHL. Those games likely wouldn't have led to some massive development, but they wouldn't have sacrificed a year on the ELC either.

It's very possible that the sacrificed year on his ELC will never make a huge impact on the Stars, but it could. Cheap cost controlled contracts are a very valuable asset in a salary cap world. Losing the year on the ELC brings Reilly one year closer to a bridge contract that the Stars have to hope is in the James Neal bridge contract range of the mid 2,000,000 area since that would imply that he's performed to a level that has confirmed their opinions about his skills. That could cost the Stars anywhere from one to two million against the cap a year earlier than necessary.

It might seem insignificant in the grand scheme of a 55-65 million dollar salary cap to us, but for those inside the organization cap management should always be on their minds. Every penny of cap space can be useful for a contending team that has spent near the max which the Stars seem to aspire to be. Ask the Blackhawks who had to strip parts of their team down after winning the Cup. Ask the Flyers who are near the cap every year by a much smaller margin than one to two million. We've never seen Joe manage a salary cap. He might be excellent at doing so, but we don't know until he does, and this situation at least raises a red flag that cap management might not be his front office's strong point.

(Managing to stay below a low budget is similar to managing a cap, but not the same thing given all the rules attached to the cap.)

The situation with Reilly Smith raises two concerns for me. One is that the Stars are a little too casual with the future cap, and the other is that they might have a communication issue. Not in the sense that Nieuwendyk and Gulutzan aren't in contract with each other, or that they don't feel comfortable working together. I have no way of knowing that, and I'm not even remotely trying to suggest that they have problems working with each other. It seems, at least in this instance though, that the goals and intents of the front office haven't been communicated effectively or forcefully enough.

Go back to the money part of the parcel from Heika's post.

I believe Joe Nieuwendyk really believes that Smith can help the roster right now. However, he is not going to tell Gulutzan how to coach.

No one likes to be supervised by a micro-manager, and its commendable that Nieuwendyk realizes this. Coaches, players, and employees in all fields work best when goals are set for them by their superiors. The underlings then go about fulfilling their goals with whatever tools are available to them. The military isn't going to spend time and scarce resources researching a weapon if they don't intend for commanders in the field to use it though. General managers aren't going to spend scarce resources (limited cap space, a year of an entry level contract) without the expectation that their coach is going to use the product of those resources; Reilly Smith, in this case.

What the signing and subsequent benching (for lack of a better word) of Reilly Smith shows is that Nieuwendyk and his coaching staff weren't or aren't on the same page about Smith. They could have discussed the situation beforehand to come to an agreement (and perhaps they did have a discussion) on his usage. Despite whatever happened leading up to the signing the result is that the Stars have sacrificed a year of cheap labor from a player who they feel has a very bright future in the NHL. The lost year may end up not mattering, but the process that led the Stars organization to the decision to sign Reilly Smith then bench him immediately has to at least make you raise an eyebrow.