The Dallas Stars took the ice against the San Jose Sharks knowing what they had to do. They took the ice with a few subtle changes attempting to fix the problems which arose on Saturday in San Jose. They were healthier after two days off. All of those positives added up to a 5-2 loss at the hands of a team, while not playing particularly well, is better than the Stars right now. The Stars outchanced the Sharks 11-10 (Fear The Fin had it 12-10 Sharks).

The Stars didn't play poorly. The powerplay wasn't good for sure, and it's been an issue all season. They didn't take many penalties, and at least one of the ones they were charged with was questionable. The Stars problem, as it has been for four years, was defensive zone coverage. The Stars forwards blew coverage for all three even strength goals. Last night their mistakes happened to all go in the net, but the mistakes are worth looking at to show the biggest issue plaguing the Stars in full, gory, graphic detail. After the jump we'll have Fathead-sized images of the three even strength goals the Sharks scored plus the player reports.

On Saturday the Sharks matched up the Joe Thornton line against Mike Ribeiro consistently to predictably poor results. Through two periods Ribeiro saw five minutes of Thornton at even strength out of his nine minutes on the ice. His line was outshot by a giant margin, and in the third Gulutzan either made a necessary change or the Sharks stopped the one for one matching with tbe lead. Last night Gulutzan did make a change.

At home he matched Jamie Benn against the Thornton line. The theory is to play some defensively responsible players (Steve Ott, Adam Burish, and Benn) who can also make the Thornton group play defense. The Thornton group took a ton of shots early, at one point Benn was -10 Corsi, but they didn't score until late. The Sharks that did the damage were further down the lineup. This is their story.

The Sharks first goal of the night was off of the stick of Daniel Winnik. He won the faceoff from Jake Dowell then went to the net. In a zone the defensemen and center routinely rotate coverage down low. Alex Goligoski follows his man to the high slot. Philip Larsen is engaged. Both Stars wingers are covering the points, but Dowell gets stuck in no man's land.

All screen grabs from NHL.com 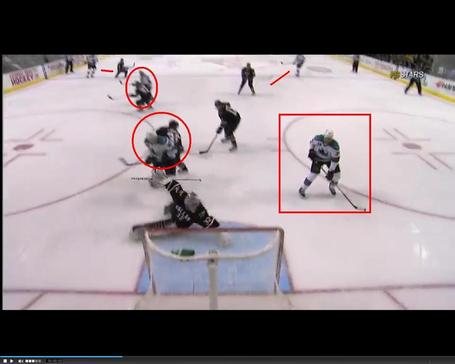 It looks like Dowell thought Larsen would pick Winnik up, but he had to shift over with Goligoski covering high. It's a blown coverage, but it happens to everyone once in a while. The Stars couldn't recover in time to stop the goal.

The next goal came off of the stick of T.J. Galiardi. The Stars D pair of Larsen and Goligoski plus the center Vernon Fiddler actually had really good rotation leading to the goal. The moments leading up to this screen grab were fundamental zone defensive coverage. Prior to this screen Goligoski hits his man (Dominic Moore) in the corner, but not enough to take him out of the play. Fiddler reads this as a time to go retrieve the puck to get it out of the zone. 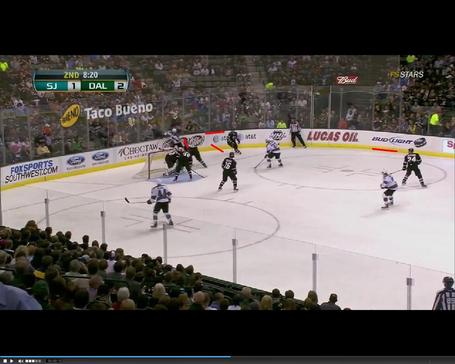 What happens next is that Goligoski is recovering from his failed hit attempt. Fiddler is trapped down low and gets beaten by the pass. Burish is blocking the passing lane to the point, but Vlasic has moved to the faceoff dot anyway, and Larsen is covering no one. Someone on the Stars has to recognize what has happened and at least attempt to lift Galiardi's stick.

The final two slides are from Joe Thornton's goal to put the game, and maybe the Stars season, away at 4-2. Joe Thornton is left alone on the ice with the puck deep in the Stars zone. Jamie Benn is the center credited with the minus, and center vs center is the matchup in a zone usually. The capture below is about four seconds before the goal is scored. 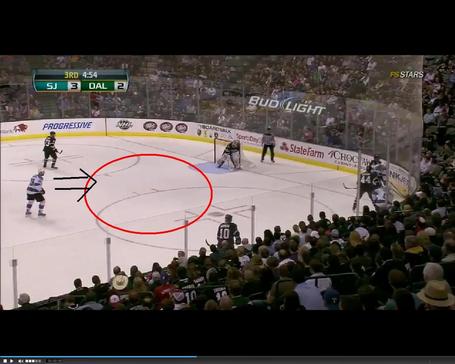 Notice the enormous amount of open space available for Joe Thornton. Brenden Morrow is smartly supporting the play up the boards in case the puck comes to him from the scrum. Both defensemen are engaged with wingers. Benn is skating back into the play. Michael Ryder isn't really doing anything. He's floating in the faceoff circle, and kind of giving the defenders an outlet if they win the puck, but the best player on the ice is skating free with a ton of open ice. 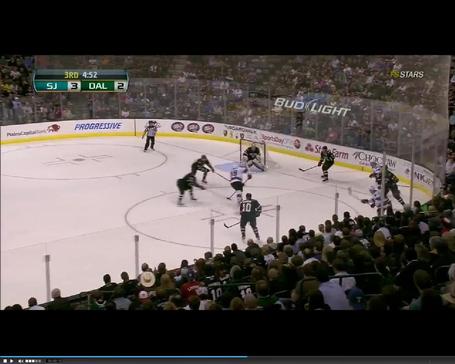 The upshot is that Benn skates from his own bench to the opposite faceoff dot in a little under four seconds, but he's too late to influence Thornton's shot. He still gets to Thornton before Ryder, who still has no other defensive responsibility, and Thornton puts the crippling goal home. It's easy to blame Benn for that goal, but it's unfair. Ryder has to make a read and make a play.

I'm not trying to pick on any of those guys. I just wanted to point out that the defensive zone coverage is still the main issue with this team. Topping my shopping list for the offseason will easily be a few defensive forwards. One will hopefully be in the top six, and another would be to anchor a checking line.

On to the player chances...

Larsen and Ryder led the Stars at +3 even strength chances. Eric Nystrom, Fiddler, and Goligoski came in right behind them at +2 chances. The penalty killing was strong. Stephane Robidas and Sheldon Souray played 3:12 shorthanded while not allowing a single chance against. Loui Eriksson skated for 2:24 shorthanded without a chance against.

None of the Stars were an egregious negative. The biggest negatives were from several players at -2.

The Stars now have to hope some teams lose, and win out. They can, and should, beat the Nashville Predators who are next on the schedule. Long term they do still have issues. The defensive coverage has to get better. Kari Lehtonen has carried this team at times this season. It's unrealistic to expect him to do so every night. If the Stars have any hope of making the playoffs this year they need to generate something on the powerplay (tough at this point) and pay more attention defensively. We'll see how they adjust in short order.