Dallas Stars Individual Goal Differentials And Why They Don't Matter

Share All sharing options for: Dallas Stars Individual Goal Differentials And Why They Don't Matter

There are any number of ways to go about evaluating the performance of a player throughout the course of the season. The most critical aspect of evaluating performance is determining if a player is doing what he needs to do to generate or prevent goals. Results can fluctuate based on any number of factors out of the control of a player so it will ultimately be unrealistic to evaluate a player based on raw production.

But, raw production is all that ultimately matters to fans in the end. Scoring goals leads to wins, and if a player is doing everything right but not lighting the lamp at an appropriate clip he's going to hear it. So, I'm going to jump on the dog pile and look at goal totals, but in a different way.

I wanted to see how the individual 2012 Stars players were performing (from a results point of view) at even strength compared to the team as a whole. If you've been following along all season you undoubtedly have some expectation of what those results will look like. After the jump we'll look at the methodology, and see how goal scoring occurred with each player when they were on the ice compared to when they were on the bench.

Then we'll talk about why it doesn't have anything to do with projecting what the 2013 Stars will do, at all.

*Note: All three are rates per 60 minutes of even strength ice time

I've read over that explanation several times, and I can't tell at this point if it makes sense or if I babbled incoherently. If it doesn't make sense don't hesitate to let me know and I'll do what I can to prove that English is my native tongue.

The Stars primary defensemen are listed below.

Philip Larsen put up some stud results as a rookie. When he was on the ice the Stars were almost a full goal better than they were without him on the ice. Of the Stars six primary defensemen (>40 games played) he was also the most protected over the course of the year. Temper enthusiasm a touch, but still be impressed. Sheldon Souray was the closest to catching Larsen of the remaining defenders, and he played much more difficult minutes.

Mark Fistric was the Stars top defensive defender looking at the data this way, but despite the Stars allowing so few goals with him on the ice he was still in the red because of his complete lack of an offensive game.

The bottom two are the ones that will receive a decent amount of attention. Alex Goligoski and Stephane Robidas got beat up in the goal differential department. Robidas was used in a shutdown role a bit too often, and he was doing so with the Vern Fiddler line in front of him so I'm hesitant to proclaim that he stunk. Goligoski led Stars defensemen in Scoring Chance differential, but couldn't buy a goal for a while. He wasn't nearly as poor as this would suggest.

The forward group is more or less exactly what you would expect.

What you might not expect is the degree to which some players were victimized. I've mentioned numerous times that the Stars third line was well below average. The trio takes up the bottom three spots here. The line as a unit was anywhere from -.84 goals/60 minutes to -1.61 goals/60 minutes this season. When you combine that with a negative Corsi you have a recipe for a poor checking line. They were ravaged as a primary checking line, and the Stars really need to find an alternative solution to the checking responsibilities if they hope to make the playoffs in 2013.

The Stars top defensive forwards this past season were Adam Burish, Jake Dowell, and Tomas Vincour which is quite an eclectic group. Burish was good for the Stars this season, and would be a good fit on a legitimate checking line should the Stars choose to resign him. Dowell would be an excellent depth piece to keep around as well.

Now that the dog pile is over this is where I point something that I hope is starting to become more obvious: none of this matters when evaluating how well a player performed. Goal scoring is largely luck driven both for and against. Flukey shooting percentages, flukey save percentages, zone starts, quality of teammates....everything impacts goal scoring totals.

The key here is PDO. PDO is save percentage plus shooting percentage when a player is on the ice. Over time that will always trend to 1000 because every shot has to be either stopped or allowed for a goal. There are no other options for a shot on goal. Notice the PDO for each player on the Stars. 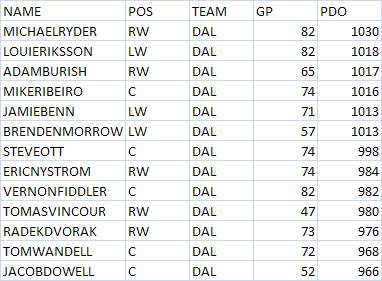 Do those two images look familiar to you? They should because they almost perfectly mirror the two previous tables.If the point hasn't been belabored enough over the course of the season: goal totals can be misleading. As interesting as it is to see the Stars checking line at the bottom of the rankings I just as easily could have (and did) told you that they were getting horrifically out shot on a nightly basis, and that is an academic sign of pending doom. Goal totals, while interesting, can lead you down the wrong path if you put too much emphasis on them.