Penalty Parade: Why Power Plays Have Dropped For The Stars And Their Opponents

Share All sharing options for: Penalty Parade: Why Power Plays Have Dropped For The Stars And Their Opponents

The Dallas Stars special teams might be heating up right now, but the opportunities they have to show them off during the games are getting fewer and far between.

Your eyes haven't deceived you, Stars fans. There really are significantly fewer penalties being called than there were earlier this season, and the difference is much more marked than it has been in years past.

With about eighty percent of the season gone, the amount of minors has dropped since the start of this year by nearly 1.5 calls per game. The trend right now is a little more than three calls per game from around 4.5 at the beginning of the season.

And yes, that's on both teams combined.

It's an interesting phenomenon that's kind of infuriating for both fans and players, who are having a hard time coming to grips with what it takes to get a power play nowadays.

To see visual illustration of the change in penalty calls and a thought as to why that might be happening, follow the jump.

Courtesy of Timmer44 over on HFBoards, who has given us permission to use his charts, here is a wonderful visual breakdown of how the average number of minors per game have decreased since the start of this season, including a trend line. 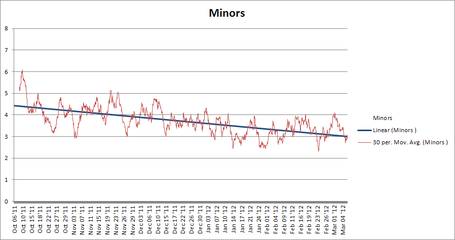 Here is that same chart from the 2010-11 season. The slope is less pronounced, though there is definitely a downward trend. 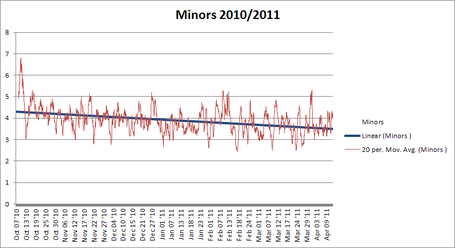 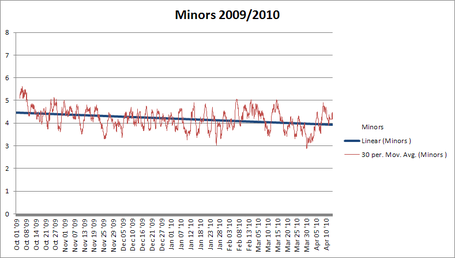 The raw data from these charts comes from here, which does not separate out matching or coincidental minors from minors that put a team on a power play.

As a point of comparison, the league averaged in the neighborhood of 10 minors per game in the season after the lockout, the first season of the "New NHL."

What's interesting to me about these charts is that every season, the call rate starts out at about 4.5 minors per game. But the drop rate this year is much more pronounced than it has been in the past.

From my eye test, though it's an opinion that is shared by most people who follow the officiating part of the game, the drop in minors is coming almost solely from a decrease in the amount of interference/obstruction types of calls. Those include things like hooking, holding, interference, holding the stick, tripping and so on. And even the referees who tend to be tight callers on such things, referees like Stephane Auger, Eric Furlatt and Dan O'Rourke to name a few, have backed off.

It's something you can easily see watching a game, and it's something the players have noticed. Watch the amount of free hands off the stick and around the opponent's hips, particularly on the boards. And it's something all teams, the Stars included, have taken advantage of while defending. Other things that have picked up are hooks on the hands and arms, particularly if the players are in close to each other so the stick doesn't have to get extended far away from the body, and interference in races for the puck.

Now, why might this be? There are a couple of theories.

The first and probably most prevalent is that the NHL has tacitly endorsed fewer obstruction-type calls as a way to slow down the game and help prevent some of the high-speed collisions that lead to head injuries.

There's a pretty sound logic to that. You can clearly tell when the NHL sends out a memo to the referees telling them to make sure certain things are watched for - it was hand hooks at the start of this season and goalie interference at the start of last year's playoffs. And referees are evaluated after each game on calls and non-calls by officiating supervisors. They have film study and get written reports. If those reports indicate that a lower level of obstruction enforcement is appropriate, then referees will take that message with them into the next game.

The idea is that hooking, holding and other obstruction fouls are illegal because they slow down offensive players and prevent them from gaining speed through open ice. With speed being a factor in force and the force of collisions being a huge part of the concussion problem in the NHL, decreasing the speed of the game probably seems like an easy way to cut down on some of the head injuries.

Of course, the NHL will never admit to this. They market the game based on high flying offenses, and decreasing the speed of the game goes directly counter to that. But it's certainly something I wouldn't put past them.

The other thought is that it's simply the natural evolution of a trend that's been apparent for several years.As you can see from the above graphs, penalties generally decrease over the course of a season, though not to this extent. And we'll get another indication at the beginning of the playoffs is this is a trend we can expect to continue, as the first round generally tightens up on the call level.

But all indications are the NHL is quite happy with the lower call level at the moment and may have even orchestrated it, so don't expect it to change any time soon.