How long can this Dallas Stars run last? The Phoenix Coyotes were asking themselves similar questions a few days ago, peaking with an incredible 11-0-1 run that saw them take over the Pacific Division lead. Now there's a possibility that they lose their third straight in regulation tonight and give the crown to Dallas for the time being. The Stars are just happy to be in the mix.

"We had had a rough time about a month ago, and it didn't look good," Kari Lehtonen said in Calgary after last night's shootout win. "But we just kept playing and stuck to it, and now it's working."

It is working, and at long last it's a lot of fun to be a Stars fan right now. It sends us all scurrying to our keyboards in search of even further reassurance of how fun it is. How excited should we allow ourselves to get? How far, exactly, can we stick out our collective chest?

Everyone wants to "call it". To say "Yes, they're going to make the playoffs." Last season the Razor boy famously "called it" too soon, though it was impossible to blame him at the time. It might come down to the final day of the year again.

The players are starting to feel like they've turned some kind of corner heading into the season's final 16 games. It's hard to argue with anyone during a 6-0-1 stretch.

"Finally, we have managed to get better as a team. Last year, and last couple of years, we kind of started well and didn't get better. Now, we are doing that. It's exciting."

His comments are representative of everyone's thoughts that follow this team closely: That things are certainly looking better right now than they were last year at this time. It's different. Right?

Maybe not. We'll explore after the jump... 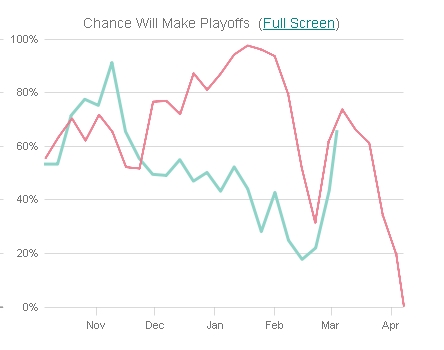 The blue line is this season. The red line is last season.

The graphs are from sportsclubstats.com, that most addictive of prognosticative web sites that tells us what a teams odds are on a give day of the season of making the playoffs. The actual percentages themselves are largely meaningless and the numbers swing wildly with victories and defeats this late in the year. It's a fun academic exercise, but the play on the ice will sort things out ultimately.

Even though the numbers are dependent in part on what other teams in the West are doing as well, the line graphs themselves are actually pretty poignant visualizations of a team's year. The peaks and ravines evoke memories of specific stretches. It's what our "fan confidence poll" probably should look like for the year.

Superimposing this year's line onto last year's reveals a curious thing. One year ago today the Stars were on their way up as well. They were, statistically, in an even better spot than they are today, as a matter of fact. Jamie Benn was terrorizing the Pacific Division on a big road swing and it looked like they were finally righting their ship after a disastrous February.

Kari Lehtonen says they didn't do this last year. They kind of did. The graph doesn't lie. They then followed it up with a 2-5-4 stretch that sunk them, though they battled valiantly in the season's final week to earn a shot at that 8 seed on the final day.

The trick is to end this current run gracefully. It will end. It might end tomorrow in Vancouver. It might end against San Jose on Thursday. It's going to end. That's alright. That's perfectly OK, but it must be cushioned.

When it does end, how far will the line on the graph fall before it starts to tick back up again? It's clear to see that Dallas has more often than not, over the course of the last two seasons, given all they've gained right back after going on any kind of a run.

They have two different five game losing streaks this year, and another stretch where they lost four of five. They cannot withstand another blow like that and make the playoffs.

Maybe the question to ask while they're flying this high isn't "How long can they keep their foot on the gas?"

It's "How quickly can they find it again when it slips off?"