A miracle happened on Thursday night: The Sharks/Coyotes game ended in regulation. This sets up a number of possibilities for the Stars to clinch over the next 3 games, and I wanted to discuss the options, ranging from the quickest route possible, down to what is more likely to happen.

First and foremost, the Stars' magic number is 7. Ignoring the implications of what any other team does, a 3-1-1 record on their own will clinch them a playoff berth.

But we know what's coming up on Saturday: Our head to head matchup with the Sharks. San Jose is now in 9th place, meaning that the games we play against them are of the 4 point variety. It affects both sides of the magic number equation. Of course, we only get the full 4 points if we win in regulation. If you win in Overtime or the Shootout (It no longer matters which, the Stars hold the ROW tiebreaker no matter what), you get 3 points.

For an idea of what exactly all that means, take a look after the jump.

First, we'll take a look at the Magic Number and the Standings, and then we'll get into the finer details of what needs to be done: 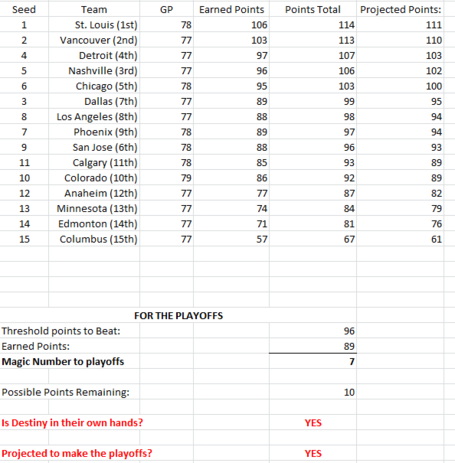 Bottom line: If the Stars can manage to go 2-0-1 in these 3 games, they will clinch. It doesn't matter if the victories are in OT or not. That's how the numbers play out.

Here's where the numbers get really crazy: The Stars can actually clinch a playoff spot as early as Saturday night. It requires all of the games in the equation to work out perfectly. Before we talk about that scenario, we need to understand the importance of the remaining schedule for our opponents.

If you bear in mind that the Sharks finish with a home & home series against the Kings, that means that someone has to lose each game. If both games go to overtime, then either both teams will drop one point, or one team will drop two points. Those are the worst case scenarios. A regulation win or two makes it even easier.

Focusing on the 2 overtime scenario, that means that if both the Sharks and the Kings are in 8th and 9th place, and they are within one point of each other, the magic number automatically drops 1 point. If that doesn't make sense yet, I'll give you an example:

Let's say that LA is at 97 points, and SJ is at 96 when they get to their head to head matchup. Before it starts, we would have to tie 96 points to be ahead of the Sharks. If LA won both games in OT, SJ would be at 94. If SJ won both game in OT, then LA would be down to 95. And if they each split an OT win, then SJ would be at 95. So, even though we'd have to get to 96 points before the matchup began, we'd actually only have to reach 95.

Now, looking at the standings, our magic number is 7. If the Kings lost tonight (either in regulation or overtime), they would be within one point of the Sharks, activating that head to head benefit for us. It would drop our magic number to 6. If the Stars also managed a win tonight in Vancouver, the number would drop to 4. What's tricky is, if we beat the Sharks in regulation on Saturday, the magic number actually only drops by 3 (going down to 1). The reason for this is that the Sharks would be more than 1 point away from the Kings, and we lose that head to head benefit. Since the Kings also play on Saturday night, it requires the Kings losing and dropping back to within one point of the Sharks in order to keep that benefit active.

In order to clinch by Saturday Night (!!!) here's what needs to happen: First and foremost, the Stars have to take care of business tonight. A win against the Canucks. Then, the Kings need to lose tonight against Edmonton, and tomorrow against Minnesota, and the Stars need to beat the Sharks on Saturday. Important note: Of the two Kings games, and the Stars/Sharks game, only one of those games can go to OT. Two of them MUST be in regulation. Otherwise the numbers don't work, and we have to wait another day.

That's a lot to ask for over the next two days. In reality, it will probably take both games against the Sharks to clinch. And remember that a couple of losses by the Stars will be pretty damaging to our playoff hopes as well. The next 4 days are absolutely crucial. Go 2-0-1 over the next three games, and we can finally begin the celebration.