It's amazing right now just how big a win can be. After Monday night's loss to the Calgary Flames, it seemed that Dallas Stars fans were ready to write the obituary on the 2011-12 season and prepare themselves for another long season. After last night's 3-1 win over the Edmonton Oilers, and some fortuitous events elsewhere in the conference, the Stars find themselves right back in the driver's seat for not only the playoffs but the Pacific Division as well.

With Colorado and Calgary effectively being eliminated from the playoffs last night, there are now three spots up for grabs by four teams. Coincidentally, all four of those teams are in the Pacific Division; once again the parity in this division is being shown, especially with San Jose falling apart this season. What's interesting is that one of the Kings and/or Sharks might actually miss the postseason, something that is absolutely amazing considering some of the moves both teams have made.

A look at the remaining schedules for these teams, as well as an update on the magic number, after the jump.

If the Dallas Stars make the playoffs, let alone with the division, it will be because they flat out earned it. This is a brutal stretch to the end the season and no two games are more important than this home-and-home with San Jose. Win both of those games and suddenly the Stars will find themselves in a very good spot.

At 89 points, it's likely that the Stars need just six of the remaining ten points in order to secure a playoff spot. Is that doable? Also, this whole thing about the "loser point" needs to change drastically. Three teams basically have under .500 records yet are fighting for the playoffs.

Finally, it's looking like the division crown may in fact come down to the final game of the season. Let's hope that St. Louis decides to rest.....everyone.

With 5 games remaining, I don't think any of us can bear waiting a full week to see what the numbers are. I'm going to try and add some quick blurbs whenever we take a look at the standings from now on. Here's the Magic Number rankings, and the Stars magic number: 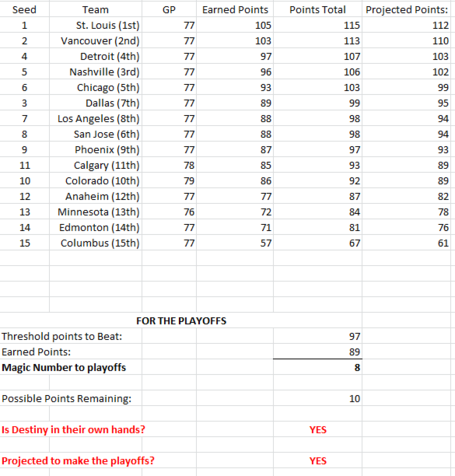 A few items I want to point out here: First tonight's game of the Sharks against the Coyotes is huge. And guess what the bad news is? NONE! There's only different levels of good news tonight! A Sharks regulation win makes the magic number 6. A Yotes regulation win or a Sharks OT win makes the magic number 7. And a Yotes OT win leaves the number as it is, but sets up the scenario where we clinch if we beat the Sharks in regulation both times.

The magic number is 8 right now, but it can really be 6 for all intents and purposes. If the Sharks lose tonight, and we beat them twice (with only one OT game in those three), then we clinch. Or the Sharks can win tonight, as long as we beat Vancouver. Or if the Sharks lose in regulation tonight, and we win against the Canucks, a regulation win and an OT point against the Sharks will clinch it for us. These are the quickest routes to the playoffs, and the scenarios aren't likely. But the fact that they exist at all is wonderful.

Personally, I just don't trust the Yotes to lose 2 of their last 5. Look at that schedule, it's cake. Obviously nothing is guaranteed, but I would love to have their schedule instead of ours. I think I'm going to be cheering for the Yotes to win in regulation tonight because of it. It gives us more control over our playoff destiny, even though a Yotes loss gives us more immediate benefit. But feel free to cheer for whomever. Just cheer for regulation.

We'll look at the other games and decide who we want to cheer for as they come up. The standings are just too close right now, and it's hard to figure out who you want to win lose the most until game day.