There are many reasons why the Stars turned their season around six weeks ago on their way to leading the charge for the Pacific Division title, yet Kari Lehtonen remains the number one contributor to this team's success this season. Lehtonen enjoyed a good season last year but has taken a big step towards becoming a truly elite goaltender and if the Stars make the postseason, it will be be cause Lehtonen led them there.

The Stars netminder, after a couple of shaky games (by his standards) stood tall on a day when the organization celebrated the life of one of his closest friends. With the Stars exploding to a quick 2-0 lead, it was up to Lehtonen to the eventual win -- making 35 of 36 saves, including a few spectacular stops in the third period.

"That was fun," said Lehtonen. "I didn't feel like I've been at my best the last three games, so it was nice to be able to help out and get some good saves. It's great to get two points. These are some important games. We just have to keep going. We can be happy about this today and start focusing tomorrow on another big one coming up."

Lehtonen was on top of his game, needed to make 29 saves across the second and third period and building his incredible season numbers to a 2.23 goals-against average and .925 save percentage. With just seven games left this year, Lehtonen is on his way to the best season by a Dallas Stars goaltender in a decade and arguably the best since Eddie Belfour stood between the pipes.

"I think you have great goalies and you have elite goalies and why we're saying Kari's elite is because his level of play is rising in important games," said Gulutzan. "They threw a lot of bodies at him and there's going to be more, but he's a big guy, he fights through it. He looked like he was in the zone, catching pucks with guys in front of him, giving our team a lot of confidence. You see a different level coming out of Kari right now, it's a great thing."

The Stars were able to give Lehtonen a quick 2-0 lead thanks to Jamie Benn and Michael Ryder goals in the first eight minutes, mirroring in some ways the quick start by the Chicago Blackhawks that doomed the Stars a week ago. The Stars used an aggressive forecheck and quick transition game to put the Flames back on their heels, who seemed content to back off the Stars rushes and give a desperate team all sorts of room to operate.

"It was huge," Benn said. "That's something we want to do, we want to see if teams are ready. We learned our lesson against Chicago when they came out and gave it to us in the first couple minutes. That's what we want to do to teams." 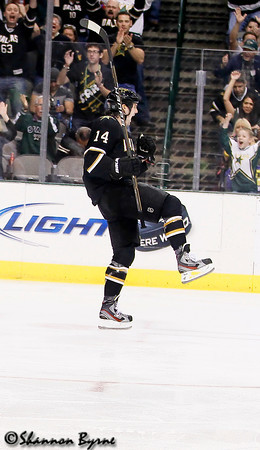 Jamie Benn, enjoying perhaps his best game in weeks, finished with two goals and led his team with four shots on goal. The line shuffling by coach Glen Gulutzan seemed to do the trick for Benn, who suddenly looked more confident and offensively aggressive after several tough games as the Stars top defensive center.

Gulutzan would make the decision to put his third line of Eric Nystrom, Radek Dvorak and Vernon Fiddler directly against the top line of the Flames in an attempt to allow the Benn line to focus more on offense rather than defense. In some ways it would work, although the Stars played with fire as the third line would more or less be dominated for most of the game against Jarome Iginla and Mike Cammelleri.

The Flames would respond with desperation of their own and a Cammalleri goal just five minutes after the Stars took the 2-0 lead was a wakeup call to just how precarious such a lead could be. The aggression by the Flames in the offensive zone and through the neutral zone also served to drastically upset the transition game for the Stars, who struggled to cleanly move the puck after the first ten minutes of the game.

Part of the reason for this was the change in strategy by the Flames who controlled their gaps much better and played the Stars extremely physically moving out of the neutral zone. The Flames also did a tremendous job of the "new" NHL rules, with clutching, grabbing, interference and obstruction all being used to disrupt the Stars attempts at offensive rushes. This is what the NHL has become once more, and good job to the Flames for taking advantage of that.

The Flames would outshoot the Stars 29-12 through the second and third periods, with the Stars struggling with their transition game as the Flames became incredibly physical and aggressive in the offensive zone. Many breakout passes and attempts to move the puck the neutral zone failed because of Stars players attempting to track back or recover from a staunch defensive stance that cut off any decent chance at puck movement the Stars might have had.

While it's always tough to see the transition game struggle in such a way, credit has to go to the Flames who did a great job of using their aggression on the forecheck to disrupt the Stars puck movement. The Stars, especially as the game went deeper into the third period, also seemed content to take less and less chances offensively and opted to keep the defenseman and at least one forward back -- even during rushes up the ice.

The Stars were able to put the game away and take much of the stress of the end of the game away when a deft Jamie Benn play to put the puck behind the net resulted in a great pass back out front to Benn, who easily buried the puck into wide open net. Brenden Morrow would then ice the game with perhaps the easiest goal of his career, tapping the puck into an empty net after a bad Flames pass.

In games like this, especially against such an incredibly desperate team like the Flames, the leading team will most times come under fire from a team becoming more aggressive as the game would wear on. The Stars would weather the storm as well as they could with the Stars attempting to overcome the incredible physical attack by the Flames throughout the game, which eventually resulted in a violent scrum toward the end of the second period.

"We're fighting out there, we're doing everything we can to win the hockey game," Benn said. "Emotions are running high and we're going to get a little chippy sometimes. Our team loves it, we got too many guys who never shut up, so we like it."

The Stars were faced with a tough task in the game, taking the ice just minutes after a rousing tribute to Karlis Skrastins left many in the arena without a dry eye. Kari Lehtonen, who was extremely close to Skrastins and his family, was obviously emotional during the ceremony and then stepped up to play one of the best games of season.

"That was hard, but it was also very nice. It was nice to see his family," said Lehtonen. "It was pretty emotional there, it was tough to start playing right away, but the guys came out flying and got two goals, that was nice. They were able to get that goal and it was tight all the way til the end. It was exciting hockey, lot of fighting and all that. It was fun."

Karlis Skrastins meant so much to so many in just a short time in Dallas with the Stars and during the ceremony it was obvious just what sort of impact he'd had on so many players in Dallas. Tomas Vincour, Lehtonen, Joe Nieuwendyk and others were visibly upset during the ceremony -- an emotion that obviously carried over to the rest of the game.

"I think there was a lot of teary eyes there on the bench, including myself, and when you see those young girls, and having kids, it's not an easy thing," said Gulutzan. "When you deal with an individual like that, you just wish the best for that young mom. But I think the guys knew how Scratch played the game and they channeled that emotion in the right way."

The Stars will face the Flames on Monday night in what should be an even more physical and emotional game, as the Flames face a situation where they will likely have to win every game the rest of the season just to have a chance at the playoffs.

"Quick turnaround, we'll get them again there in Calgary with another big two points on the line," Benn said. "I think the emotions and the playoff atmosphere is going to carry over. There are two big points on the line and both teams are pushing for a playoff spot, I think it's going to be a hard-fought game and we're looking forward to it."