Only 2 weeks remain in the stars schedule, and things are coming down to the wire. The Pacific race, not to mention the race for the 8 seed, is as tight as I've ever seen it. At least last year it was only us and Chicago trying to get in. This time around it's the Stars, Sharks, Yotes, Kings, and the Avs all vying for the Pacific division crown, or the 7th & 8th seed. Three of those teams will continue their season. Two will go home wondering what could have been. At least part of this race will come down to the last day of the regular season. I have no doubt about that.

So let's take a look and try and figure out where the Stars will wind up after game 82, shall we?

The three games over the past week panned out almost exactly as I hoped. A win against Phoenix and Calgary, and a loss to Vancouver. That's about as much as you can ask, considering that both the Coyotes and the Flames are desperately trying to stay in the race, and we had already managed to beat Vancouver twice before. (In my mind, that game against the Nucks was merely an extra bonus. If we had won, it would have been great, but I already considered it a loss.)

The Stars did their part this week, and maintained that small cushion that they built up across an 11 game point streak. That's the good news. The bad news is that the cut line for the 8th spot crept up another point.

Take a look at the magic number standings after the jump, including a team by team analysis of where they stand.

As always, If you haven't read up on what the magic number is, or you would like a quick refresher, you can read my original post here.

Here's the Standings after all games played through Sunday: 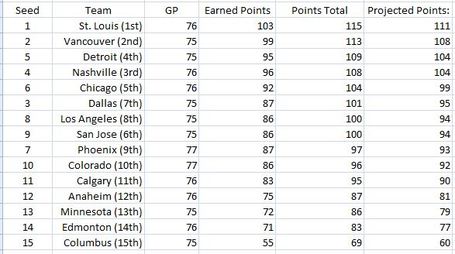 Overall, there was not a whole lot of movement in the rankings. The biggest one is San Jose. They squandered their games in hand, and dropped from 6th to 8th. Because of that, Dallas and Los Angeles slid up on spot. It's nice to have another team between us and 9th place, but there still isn't a whole lot of wiggle room. Before we analyze what the other teams need to do, let's look at the Stars' magic number:

As you can see, the magic number dropped to exactly what I was hoping last week. In reality, that's above pace with the season. There were 18 points remaining with 3 weeks to go, so it's reasonable to expect to see a 6 point drop per week. Anything more than that is good news for the Stars. Anything less is devastating. But with 7 games remaining, the Stars can guarantee their own spot with a 5-2 finish to the season, and that's if every team below them won every remaining game they have. Thankfully, this is impossible, since every team plays each other several more times. You can probably look at a minimum of 2 additional "help" points even in the absolute worst case scenario. Not to jump ahead of this magic number, but that would mean a 4-3 record to get to the playoffs.

The best news out of these tight standings is the ROW tiebreaker. The Stars will beat any team it is matched up with in ROW, meaning that we have to get one less point earned than any of our enemies. They have to beat us outright. We simply need to match them win for win.

Now let's start taking a look at the teams we are fighting for the playoffs. The cut line is 94, but I think it's safe to say it will be at 95 when it's all said and done. (By the way, I also think the Pacific Division winner will finish with 95 or 96 at most. So, there's that.)

Let's take a look from the bottom up in this race. The first is our Monday night opponent, the Flames. If they win every remaining game, including tonight, they can only finish with a maximum of 95 points. Lose even one more game, even in overtime, and they are all but eliminated from this chase. I would dearly love for that to happen tonight, but we shall see. Even if they managed to win tonight, 4 of their 5 remaining games are against the Kings, Avs, and twice against the Canucks. I have a hard time thinking that they can win all of those. I'm going to go ahead and list them as "no longer a concern." Of course, when I say that, I mean only in the playoff race. When the Stars play them, they will be an agitated and desperate group. The Stars will need to match that intensity in order to win.

Next up is the Avs, with a possible point total of 96. One regulation loss in their remaining 5 games, and they will be just about wrapped up as well. 4 of their last 5 games are against the Sharks, Nucks, Flames, and Preds. The flames may be out of the race by the time this game comes up, so I'm not sure what to expect there, but the Preds and Wings are locked step in step for home ice, and that final game of the season could be a real doozy. Personally, I don't think they can win all of these. So here's what I will be doing regarding the Avs -- cheering my ever loving guts out for them to beat the Sharks on Monday night. If you think they're likely to win out, then go ahead and cheer for the sharks if you like. I just don't see it happening.

So that's the 10th and 11th place teams that are just about out of this thing. If they are still in this race after this week, it will be bacause the cut line has dropped. And as long as it's not the Stars that are the cause of the drop, I'm okay with that. It means more "magic number cushion" for us.

That leave 4 teams, all in the Pacific Division, vying for 3 spots in the playoffs, including a pacific division title, and home ice advantage in the first round. The Coyotes can only reach a maximum total of 97 points, and they have 5 games to play. They have one of the easiest schedules remaining, so I don't know how much more help we can get from them. They play the Sharks, Ducks, Blue Jackets, Blues (who will surely be resting players by then), and the Wild. They can easily go 4-1 and finish with 95 points. It will be interesting to see if they can live up to that. A playoff spot is theirs for the taking. (Anyone else think they will OT-loss-back their way into it? Me too.)

The Kings face the Nucks, a hopefully eliminated but still desperate Flames team, Oil/Wild on a back to back, Oil, and then finish with a home and home against the Sharks. They can only finish with a maximum of 100 points, and I can see them easily winning 4 of the 5 games before the home & home finale. After that, one more point should be enough to get them in. Again, like the Coyotes, I think a playoff spot is theirs for the taking. If they miss, it won't be because of what any other team did.

If you'll notice, I skipped the Sharks in this discussion. I wanted to get to them last. I think they are the real true enemy of the Stars. Either we get in, or they do. It's that simple. Granted, theirs is not an easy schedule to finish, but neither is ours. They play a desperate Avalanche team, the Ducks (who have really embraced the spoiler role, it would seem), followed the next night against the Yotes (who will have had three -- THREE -- full days of rest), our home and home with the Stars, and the home and home with the Kings. It would not surprise me to see the Sharks go 1-2 in their next 3 games. At the same time, it wouldn't surprise me if they went 3-0. You just don't know with this team anymore. They are the real wild card. The bottom line is we need to win both games against these sharks if we want to have any hope of beating them into the playoffs. I know that the first time we play them will be on the second night of a back to back, after playing the Nucks the night before (once again, thank you soooooo much NHL schedulers. remind me to send you some flowers...along with a swift punch to the face), but the more important one is in San Jose. Yes, we should try to beat the Nucks. But, in my opinion, you start Bachman in Vancouver. And should the Stars fall behind by more than 1 goal, you quit playing, you stay healthy, and you gear up for the following night's game. I hate having that quitters mentality as much as anyone else, but I think it's what you have to do at this point.

Okay, enough of the head to head talk. Let's forget about all of that for a second, and let's take a look on the brighter side. With 4 games this week, the Stars can put a serious dent in the magic number. I would love to see it down to 4 by the end of the week. That's my hope. 6 is still okay, but there won't be much room for error. If it's at 8, we're in serious trouble.

Either way, the Stars have seven games remaining. I still think 95 points will get you into the top 8 (especially with ROW considered). We stand at 87 points now. We need 4 more wins, in 7 games.

Does that kind of requirement sound familiar?

Ladies and gentlemen, welcome to round one of the Dallas Stars playoffs.

Realistically (Not Intangibly!), where do you expect the Stars to finish this season?