You didn't really think the Stars were going to sweep the Canucks in the season series, did you? The Stars were actually set up pretty well to go 3-0 in the series against the Canucks. They played Tuesday night with a day off at home while the Canucks traveled from a shootout loss in Chicago. Oh, and Daniel Sedin was out with concussion-like symptoms thanks to a hit by Duncan Keith. The Stars came close, but ultimately lost 2-1 thanks in no small part to the excellent play of Cory Schneider in net.

He needed to be good. The Stars outchanced the Canucks 18-14 including 14-8 from the first period on. Special teams were a big equalizer tonight with the Canucks winning the special teams battle 4-1. The Stars had their chances to win, and much like in Phoenix small defensive breakdowns compounded into bigger problems which led to goals against. The player reports show that one line really played well, and you might not expect who it was. Follow the jump to find out who it was.

No line appeared to stand out from watching the game, but there was a lot of noise in the game that could sidetrack a viewer. The physical sideshow was certainly distracting, and at times seemed some combination of unnecessary and fruitless. What exactly was accomplished by either team from the nastiness? The point is to inject energy, no? If that was the point it failed miserably because the other main distracting aspect of the game was the turbulent pace. All the stopping and starting, the icings, and the puck freezes killed the pace early on to a point that the game couldn't be revived.

The line that quietly stood out was the Jamie Benn line. Benn and Steve Ott ended up +4 chances. Loui Eriksson, their linemate in the third period, was +5 chances to lead the Stars. I barely remember them doing anything, but here they are leading the Stars in scoring opportunities.

The defense corps was much improved last night. Sheldon Souray, in particular, had a huge rebound game. He and partner Stephane Robidas were +4 chances to lead the defensemen. Alex Goligoski and Philip Larsen were both +2 chances also. The group as a whole was much better. They made one poor mistake that came back to bite them. 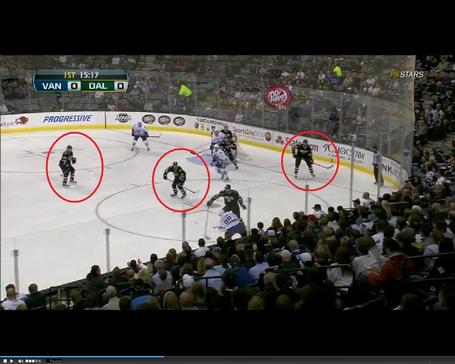 The three players in red circles are the three Stars defensive players covering no one in the defensive end of the rink immediately before Mason Raymond put the Canucks up 1-0. That isn't good, but on most nights an NHL team can overcome a mistake like this. All you can do is tip your cap to Schneider.

The next time the Stars take the ice will be against the Calgary Flames. The Flames are surging up the standings, and want nothing more than to knock the Stars out of the playoffs to claim a spot of their own. This is playoff theater at it's finest, and I'm loving every minute of it. I hope you all are too. I grew up knowing nothing but playoff hockey. The past three years without it have made me really appreciate how fortunate I was to see so many playoff successes in my formative years. I can't wait for Saturday.