This season by the Dallas Stars has been about players stepping up, taking on bigger challenges and succeeding in incredible ways. The Stars are a team that probably aren't as skillfully talented as those that surround them in the standings might be but one thing we've seen from this team this season is that they don't give up, even after a roller coaster ride the first 50 games or so.

This season has been about growth, not just by certain key players but also by the coaching staff. The way that the Stars were able to change and adapt after the All-Star break was nothing short of a revelation and the key reason why the Stars were able to turn this team around. Where the Stars might have faltered in recent years this team buckled down and change the fate of the season and for the first time in nearly four years, we finally have meaningful hockey to talk about.

As we settle in for this final stretch run, which the Stars began the right way with a win over Phoenix, those same key players that fueled the turnaround of the season will look to lead this team to the postseason. Kari Lehtonen, Jamie Benn, Mike Ribeiro, Michael Ryder and Loui Eriksson will all be key factors in whether the Stars finally make it back to the playoffs.

What isn't talked about as much is how the role players, the "unsung heroes" on the Stars, will be the ones that really make the difference. 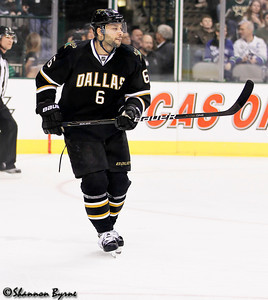 Daley has had an interesting season for the Stars. At the midpoint we named him as the "Norris" candidate as the best defenseman on the team, something that seemed to have shocked a few Stars fans. Daley has played the most games this season of any defenseman on the team and has been the most steady, showing great improvement in his defensive game while maintaining his offensive aggression.

Daley's point output has tailed off a bit lately, with just two points in his past nine games, yet he still has the ability to make an incredible difference with his skating ability and speed. There are times when Daley appears to be magical with the puck in the offensive zone, his aggression forcing errors by the opposition and opening up scoring chances for those around him.

His ability to provide sound defense, great penalty killing and timely offense will be invaluable for a team that needs contributions from everyone not on the top line. At some point, the Stars will need to get points from players not named Eriksson, Ryder or Ribeiro and Daley will help be the catalyst for such production. The Stars haven't gotten the best offense possible from the blue line but Daley represents a considerable threat when we factor in his ability to push the offense up the ice with his speed.

Along with his continued good play defensively and Daley becomes a key player for the Stars down the stretch that isn't getting much attention as we move forward. 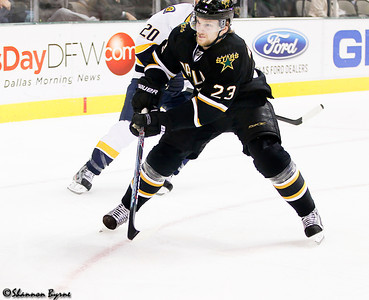 Tom Wandell has been an interesting figure for Dallas Stars fans the past few years. Before his knee injury he showed signs of becoming a potential top-six speedy winger who needed to find his scoring touch, but struggled last season when attempting to find his role on a turbulent hockey team.

This season started about the same for Wandell, who has found his niche as prime defensive forward and third/fourth line option at center. He's a staple on the team now and no matter who is moving up and down the lineup, Wandell will likely remain at center on the fourth line (which is essentially the third line in some ways).

Wandell's ability to provide solid defense, puck possession and decent offensive skills have made him one of the more valuable forwards on the team in very limited minutes. The ability of Wandell to provide quality play in limited time on the fourth line gives Glen Gulutzan all sorts of options as he attempts to get the best matchups on the ice, especially when we consider that Wandell and his line have been taking key defensive zone draws during the past month -- leading to some success for the Stars are they attempt to put their players in better position to succeed.

Wandell won't ever be the top six guy we'd hoped for when he showed flashes a few seasons ago, but he's shown that he can more than add value in a very important role on any team making a postseason run. Having a legitimate fourth line is something the Stars couldn't boast last season and this year Wandell has been a big part of the success of the Stars. 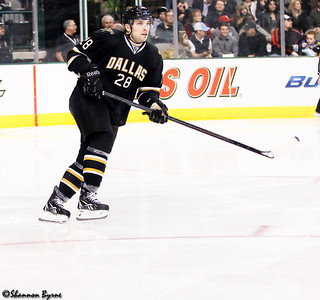 Mark Fistric has seen his season take a drastic turn for the better the past month or so, as he's settled into his new role on the team after Nicklas Grossmann was traded to the Flyers. Always the biggest hitter on the team and the most physical defenseman, Fistric has been forced to become more defensively responsible during this run and he's responded with the best games of his career.

Fistric has done this by limiting his mistakes with the puck while maintaining his physical nature in the defensive zone and in front of the net. The issues that stood out against Phoenix and Nashville a month ago don't nearly show up as much these days, a great sign that he is focused on limiting the unforced errors that drive coach Gulutzan crazy.

Fistric has never been one to provide much offense and that's not his role yet he's managed to be in the positive on most nights in scoring chances and has had one of the better Corsi +/- among defensemen during the past few weeks. He's doing this while also playing significant minutes on the penalty and has been a big reason for that unit's continued success the second half of the season.

The Stars are going to need solid play from all six defenseman these next few weeks and losing FIstric for just one game could hurt. While he'll never be regarded on the same level of important as Goligoski, Larsen, Daley or Robidas, Fistric's impact on the Stars has been a big reason for their success during this 12-3-1 run they find themselves on. If the Stars hope to make the postseason, Fistric's continued success will be a big part of that as well.