The Stars strong playoff push continued Thursday night with the San Jose Sharks in town. In a critical late season divisional matchup the Stars were able to scratch out two points to widen their division lead to (currently) three points after beating the Sharks in the shootout 4-3. The Sharks outchanced the Stars 22-19 (Fear The Fin had it at 23-18).

At even strength the Stars outchanced the Sharks 17-16. The Sharks big advantage came on special teams where they outchanced the Stars 6-2. The game as a whole was very enjoyable, but there are still some issues (one in particular) that raise red flags. The Stars still aren't getting Mike Ribeiro into the offensive zone, and it's causing problems. We'll look into that and go over the player charts after the jump.

Over the past week we've discussed how the Stars have tried to adjust their lineup with a healthy Jamie Benn. One of the difficulties of deciphering what they were attempting to do was that the Stars were on the road. The road team will always have less influence on the line matchups due to the home team having the last line change. The Stars returned home to face the Sharks so their intentions should have become clearer. Below are the offensive zone start % and Corsi ratings for each of the Stars four centers from Thursday night.

The Stars got the Vernon Fiddler and Benn lines in the offensive zone for 66% of the faceoffs they took. The Ribeiro line took 40% defensive zone draws. The Benn line was the only line to keep it's head above water despite the struggles of Ryan Garbutt against better competition (-3 Corsi). The Fiddler line, despite very favorable offensive zone time, had a -7 Corsi. The Ribeiro line, with very difficult defensive time, had a -8 Corsi. The defensive position the Ribeiro line was put in by the coaching staff put the Stars as a whole in a difficult strategic position, and the lack of offensive ability of the Fiddler line limited the Stars ability to generate offense to cover for Ribeiro.

Both lines had a common enemy. The Joe Thornton line lit both groups up. 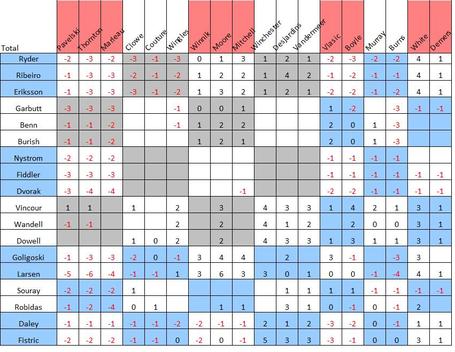 This chart is one I am going to do more with when the season is over. It's a head to head matchup of the scoring chances recorded from an individual game. These are the chances from the Sharks game broken down by head to head matchup. The Thornton line was all over it against the Fiddler and Ribeiro lines (plus Garbutt). The point (which I promise I'm not going to belabor over the final month of the season) is that the Stars don't have an appropriate checking option against top competition. This is especially true with Steve Ott hurt.

The Stars have kept the Fiddler line out of the defensive zone lately. It's a good idea, but they're still struggling with matchups against top competition despite not being near their own net. They don't have possession skills so putting them on the ice against players who aren't inclined to give them the puck is like beating your head against a wall if you're Glen Gulutzan. I think the better idea would be to use the Benn or Tom Wandell trio in that role. The role is pretty clearly defensive in nature. The Fiddler line was trying to "check" the Thornton line up the ice. The best way to do that, though, is by not letting them have the puck.The possession skills of the Benn and Wandell lines are exactly what you'd want in that scenario. Ultimately though, the Stars need to make more of an effort to limit the defensive and maximize the offensive exposure of the Ribeiro line to keep this run going. If given the opportunity they have enough offensive ability to mask the defensive issues the other matchups cause until the Stars are able to address the issues in the offseason.

The Stars top players (outside of Kari Lehtonen) were the fourth line of Tomas Vincour, Jake Dowell, and Wandell. They were +6, +5, and +3 chances respectively. The most astonishing part of their production is that they did that in about seven minutes of ice time. As you can see from the head to head chart they were clearly superior to the Sharks fourth line. Vincour was even +1 against the Thornton line, and that one chances was his late game tying goal. Vincour would then go on to score the lone goal in the shootout to give the Stars two needed points.

In four short hours the Stars take the ice against the Anaheim Ducks. The Ducks have drifted out of the playoff discussion over the past two weeks while the Stars have surged. The Stars have a little breathing room given their current streak, and tonight they get two reinforcements. Brenden Morrow and Ott will rejoin the lineup with what should be an extra infusion of energy. This is a trap game of the highest order, but the reinforcements to the lineup should do nothing but help protect against the urge to step off the gas.