Editor's Note: Our apologies for the continued technical difficulties this morning. We have been assured that all efforts are being taken to minimize this occurrence for the future.

"If you put up 45 shots and lost 2-1 against an outstanding goaltender, you've got to live with those. But if you get outplayed and outworked and your goaltender stands on his head to keep it close, I've got a big problem with that."

Dallas Stars coach Glen Gulutzan was not happy after his team's 4-1 loss to the Phoenix Coyotes on Tuesday night. It's become a running theme for this team since the holidays, when it seemed the Stars had finally turned things around and were gaining momentum. Unfortunately, the Stars have apparently lost confidence in their game and it's affecting every aspect of their play and now, perhaps worst of all, their level of energy and effort in these games is now lacking.

The Stars had won three of four games coming into Tuesday's matchup with Phoenix, with poor efforts masked by the stellar play of Kari Lehtonen in net. In all three wins Lehtonen was clearly the star of the game, including the six-goal outburst against Anaheim coming out of the break. While having a good goaltender assist in carrying a team through tough times is great, this trend is becoming tiresome.

"We weren't very good again," said Glen Gulutzan. "Even with a real good goalie performance, we got outworked by a team that played last night."

I always hesitate to harp on "effort" and "passion" when attempting to analyze losses. To me that can lead to poor analysis and is a bit of an easy out for those of us carrying the team, as we try and determine the deeper, more realistic reasons for this team's struggles. I have personally fallen into that trap before. After last night, however, it's impossibly to overlook the complete lack of passion this team possesses on too many nights.

This is something we've written about before, too many times. This is a team that can ill-afford to have lapses in effort and execution and when the Stars aren't playing aggressively and confidently, they'll get run over by the opposition. Once again, the Stars are dangerously close to being completely left behind by the teams fighting for the postseason right beside them.... 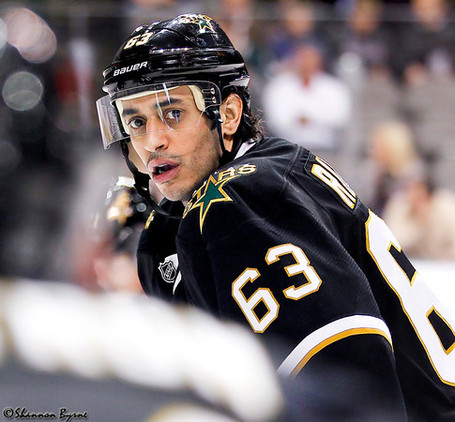 There are games when the Stars are grossly outplayed by a talented team, who is obvious just better all around than the Stars -- something that there really isn't much wrong with. It's just the reality of the situation sometimes, such as when the Stars faced the Sharks last week. San Jose is obviously a better team and only a monumental effort by the Stars on that night would have overcome the disparity in talent and depth.

That fact just proves how narrow the precipice is on which this team is standing. There is little room for error and the team must play up to it's full potential nearly every night in order to even have a prayer of winning -- let along making the playoffs. When the Stars come into a game flat, with little passion or energy, then they'll be run off the rink on most nights if Lehtonen isn't doing all he can to win the game.

Now the talk turns to trying to figure out just how to fix it. How do you fix "energy" and "passion"? Glen Gulutzan was brought to Dallas as a coach that was supposed to connect with the players and renew their passion for the game. More than halfway through a grueling season, the Stars have lost that love of the game that was obviously there the first month of the season and it's been painful to watch.

When I talked to people with the team back in November, I was told they had not seen such a positive atmosphere around the Stars in a number of years. They were confident and playing with aggression and "pace", two things that are a staple of the system that Gulutzan preaches. He wants strong defensive responsibility and a good push up the ice. Now, a little over two months later, and that approach has all but vacated from this team.

You hate to use this team (and it's something I was writing about around this time last season) but it's obvious this is a team without an identity. The Dallas Stars have a locker dedicated specifically to the "Pesky Stars", a term that has been the battle cry for this season. Over the past month, that side of this team has disappeared as they once again wilter under the pressure of adversity.

"We do and we don't (know who we are) at times. We do and we don't. We haven't played well since the break. We've got to get going," Gulutzan said. "Record aside, whatever it was, three wins in the last four or two of the last three (coming into Tuesday), we need to be better. That's not asking too much, that's reality."

Of course, Gulutzan has to determine how to fix it.

We talked early this week how much this franchise wants to make the playoffs and how the team is likely prepared to make the moves necessary to make that even close to possible. If the playoffs are such a concern, and every player on this team certainly wants to get there, then perhaps more than a few trades will be needed to actually accomplish that goal.

Perhaps a shakeup is needed. Something drastic by Gulutzan that sends a message to the team. Scratch one of the struggling veterans and play a younger player in his place. Reward those players that are playing with energy and fire each night, even if the production isn't always there. A team with energy and passion that loses is much better than the alternative.

The coaching staff has done a good job of adjusting their strategic approach to the game over the past few weeks, as it's obvious that Gulutzan is learning how to respond to various challenges in his first season as an NHL coach. When the season first started, Gulutzan would have stood in front of the media and talked about the good that the Stars accomplished, despite the loss. Lately, he's been much more forthright and it's plainly obvious he is unhappy with how his team is playing. 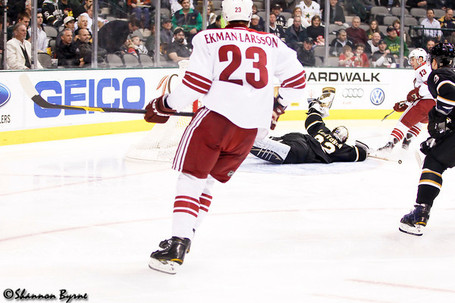 The challenge is to insert passion into a team that has fallen into this same trap before under two other coaches. It doesn't matter what the system may be, if the players aren't showing passion in their game -- if they aren't winning those one-on-one battles -- then the team will lose. Same thing goes with talent: if a team is talented and full of high-priced players, a lack of passion and effort will sabotage any improvements to the roster than can be made.

"We lost a lot of one-on-one battles," said Stephane Robidas. "When you lose those you always end up on the wrong side, and that's exactly what happened tonight. They played a simple game. It was right there for us, but it comes right back to the work ethic."

It's easy to root for a passionate team that is losing. It almost makes the losing easier to take. Yet when the team is only able to generate two scoring chances in the first two periods of a game and looks almost bored through most of the 60 minutes, then it's understandable when fans get frustrated. This is a team that is trying desperately to convince fans to come back to the AAC regularly and based on the game against Minnesota, there is certainly the potential for sold out nights full with rowdy fans.

I don't believe the players on this team "don't care." I know for a fact they certainly do care and I know they have a passion for this game. They have good chemistry in the locker room and there's a surprising lack of finger-pointing happening with each loss. That passion that we know exists, however, is absent from their efforts in each game.

This has been a problem for a few seasons now and perhaps the problem with the Stars runs deeper than just a "low payroll and lack of talent". This isn't something that can be fixed with a trade for a goal-scorer. This is something deeper and it's going to take the players themselves to figure it out. They couldn't do it last season or the year before; let's hope this spring changes that trend.