The Stars continued their recent trend of getting outchanced by a severe margin against teams they're fighting with for the final Western Conference playoff spot last night in the 4-1 loss to the Coyotes. After the loss the Stars sit 11th in the West. The Stars are still only two points out of the 8th seed, but don't look now. They're only nine points out of 29th also. It's highly unlikely that the Stars will fall that far, but it won't take many more efforts like we saw last night for them to drop further out of playoff position.

With two big points on the line the Stars allowed the Coyotes to outchance them 17-6. The Coyotes built their lead after the first period, but they laid the groundwork for the eventual 4-1 win by coming out strong in the first. They outchanced the Stars 8-1 in the first, and 9-5 for the remainder of the game.

The issues that arose from the game are numerous. The defense and offense were both poor. The even strength picture was even worse than the overall picture given that two of the Stars six chances came on the powerplay. Jamie Benn had his worst game of the season, and the Stars appear to be coming apart at the seams. After the jump we'll look at one bright spot that popped up late, a terrible goal, and the player charts from the game.

Throughout most of the game the Stars looked completely out of synch in both zones. The zone the Stars run defensively doesn't appear to work. When the attacking team keeps their skates moving it generally doesn't take much to find breakdowns in the zone to create easy offense. Below is an example of the problem from last night. This is the scene right before Radim Vrbata put the Coyotes ahead 2-1. 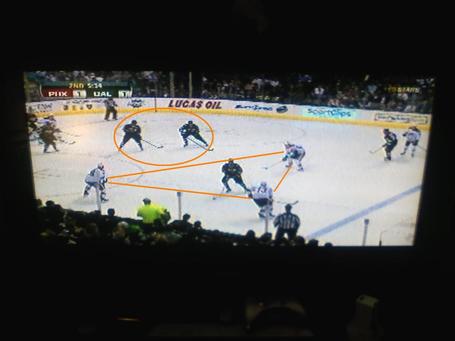 I may have taken this with my phone...don't let that distract you.

Trevor Daley is in front of the net covering a Coyote. Loui Eriksson is at the left point covering a Coyote. That's a good start. Nicklas Grossman and Eric Nystrom are standing in the slot doing...something?. I guess. They aren't protecting for a cross crease pass because there are no Coyotes behind them, or even threatening to get behind them. The gap control just seems to stink which allows the right point and two forwards for the Coyotes set up a passing drill around one of the Stars worst defensive forwards (Ribeiro) while two guys stand in the slot doing the equivalent of nothing.

The point man passed to the forward in the high slot (presumably Nystrom's responsibility) who then passed down low to the forward on the boards to pick up 40 prime feet uncontested. It's too easy. That isn't NHL caliber defense. They play a zone, but that doesn't mean stand in one place. They have to pressure the puck carrier at some point. They have to be positioned better. Breakdowns like this can't happen as often as they do.

Despite the defensive breakdown pictured above, the Ribeiro line was the Stars top line. Ribeiro 0, Nystrom 0, and Eriksson -2 were the top unit overall. They didn't have much in either end, but compared to the rest of the lineup they were elite. Benn picked a poor time for his worst game of the season. He and Steve Ott were -5 and -6 even strength chances. The third line (from which Tomas Vincour was banished) were exceptionally poor also. Vernon Fiddler, Radek Dvorak, and Adam Burish were -6, -6, and -5.

Part of the reason for the ridiculous negatives is the play of the defense. No pairing fared well last night. The top defender was Grossman at -3. The Alex Goligoski/Philip Larsen pair continues to be a defensive liability after being on the ice for six chances against, but they managed to come in second in the fail race. Stephane Robidas and Sheldon Souray were both on the ice for seven chances against. The moral of this story is that no one escapes blame for a game so poor.

One encouraging aspect of the game was the solid continued play of Vincour. The Vincour/Tom Wandell unit had a defensive miscue, and they don't show up on the chance sheet in the offensive ledger. That isn't because they were playing poorly though. They generated consistent possession in the offensive zone through smart simple plays, teamwork, and strong board play. They didn't take the puck to the net, but they had chances to do so. Vincour, in particular, had a few chances to take it to the rack but decided to pass instead.

The coaching staff appeared to take notice (unless they were just sending a message), and rolled Vincour out on a line with Ribeiro and Eriksson late in the third period. The Ribeiro line looked much better in that short time, and I don't think it was a coincidence. If you're looking to inject a worker bee defensively conscious mentality into the top six you could do worse than moving Vincour up for a cup of coffee.

This recent run of demoralizing play feels like the end of the world, but there's still plenty of time to right the ship. Unfortunately I feel like I say something similar every time I write one of these up. Regardless, they can still fix the issues. Benn probably isn't going to have another game like that for the rest of the season, and the defense really can't be worse. Keep your chin up, and tune in Thursday for what has to be a better effort.